No beef about this steak 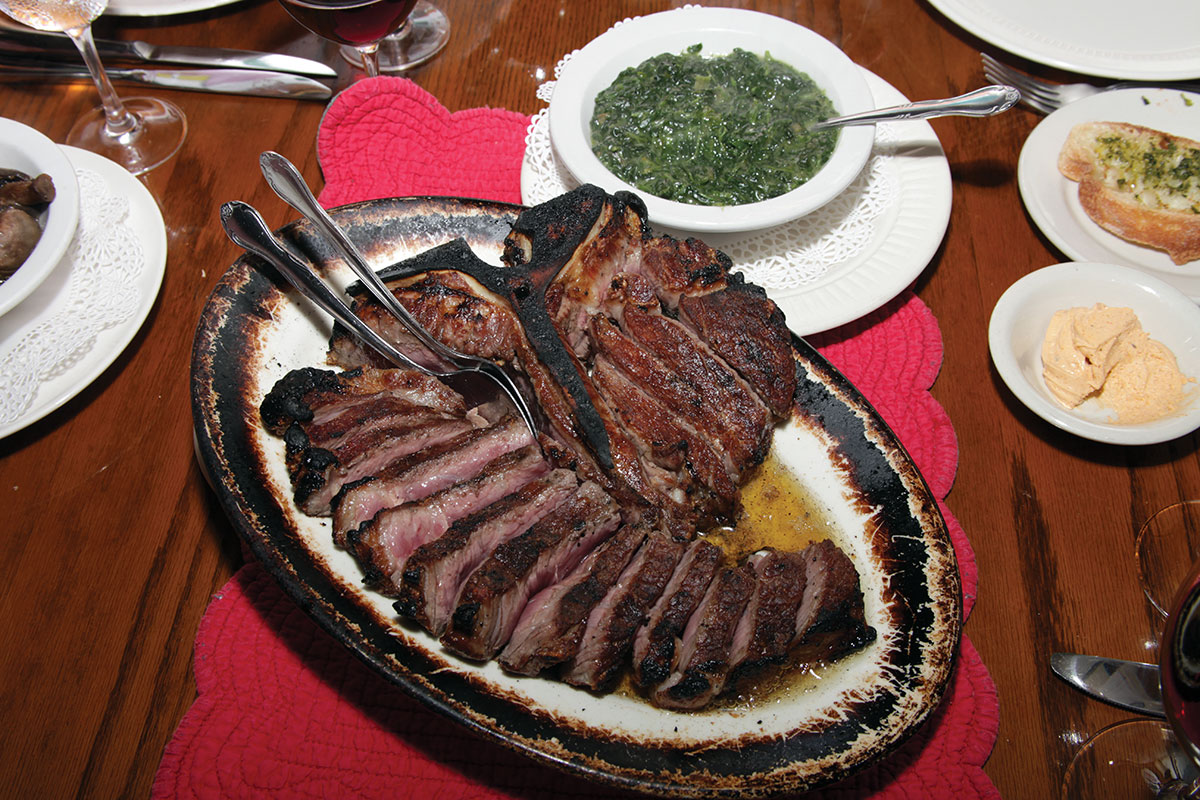 Ever since Peter Buchner bused the first table at his mother’s Austrian hillside restaurant as a 6 year old, he knew he would be a restaurateur.

Opened in 1999, Peter’s Steakhouse is referred to by his employees as “the best kept secret in Jensen Beach.” But the fact is, the 85-seat restaurant is known by steak aficionados from around the world and across the United States.

“Before I retired, I traveled around the country and ate at all the great steakhouses — the independents and the chains — New York, Miami, Chicago, San Francisco,” says Ed Brown, a New York snowbird with a condo on Hutchinson Island. “Peter’s is better than any of them. I like the menu. I like the steaks and I like the service and the atmosphere.”

Dining by himself, Brown says he and his wife have enjoyed meals at the restaurant since it opened, sampling porterhouse, boneless Angus strip, T-bone, New York, rib-eye and filet mignon steaks and other entrees.

Another customer was playing golf in Japan, when he was told that if he was ever in Florida, “Go to Peter’s Steakhouse in Jensen Beach.”

Pat Schmoyer, a retired Martin County high school principal, could be the restaurant’s most frequent diner, enjoying hundreds of dinners at her favorite table with friends and family, including her 96-year-old mother.

“I love Peter’s Steakhouse and all my friends know how much,” Schmoyer says. “I’m a steak connoisseur. He has the best steak in town. When my daughter comes to visit, she insists we come here. If I didn’t have a family, I would probably be here every night.”

Decorated in the style of a quaint Austrian inn restaurant with photos from Buchner’s career in Austria and New York lining the walls of a narrow hall, Peter’s offers a simple menu served family-style with huge portions. On a Thursday night in December almost every one of the 40 diners left with a to-go box.

When the 24-ounce rib-eye steak arrives, it is perfectly sliced to be eaten slowly in the European tradition with side dishes. A few feet away at the slightly elevated “upstairs,” eight people are having an animated conversation before two giant plates of steak arrive. The group quiets as the servers complete their service.

Austrian dishes include, Weiner schnitzel made with veal or pork. Other entrees include lobster, filet of fish, jumbo lump crab-cake dinner and half-broiled chicken. Side dishes are separate, but they all arrive with portions for two diners. Peter’s German hash brown potatoes are popular along with fried shoestring onions. Famous appetizers include three slab slices of applewood smoked bacon from Vermont, which tastes great alongside an Idaho baked potato too big for the plate. The legendary shrimp lobster bisque commands two days to prepare.

The steak sauce ingredients are simple enough: tomatoes, water, apple cider vinegar, horseradish, sugar, salt, spices, molasses, garlic, onions, shallots and tamarind. But the sauce’s secret is just how much of each ingredient is added to the sauce, which is a variant of the recipe from the world-famous Peter Luger Steakhouse in New York, where Buchner once worked. Twelve-ounce bottles sell for $5.

“It is a tangy sauce just the way Peter likes it and once you try this you will never go back to catsup,” says assistant manager Danielle Hill-Howell, an employee from the beginning days. “We put it on everything.”

“My mother worked in the kitchen and my father was the head waiter,” Buchner says. “People would hike out of the Vienna woods and come to the restaurant.” It was a former estate of Count Liechtenstein, the namesake of the tiny nearby country. In his charming German accent, Buchner tells the story of a Great Dane that was tied to the table leg outside the restaurant when along comes a German shepherd. Seconds later the Great Dane drags away the table, plates and food, chasing away the invader.

Buchner grew up working in the family restaurant and later at the Hotel Imperial in Vienna. Leaving Austria for an apprenticeship in Bermuda, he met and married his wife, Nilsa, who fills in as hostess during the season. From Bermuda, the couple left for New York, where Buchner worked for 25 years as a waiter at the Peter Luger steakhouse in Brooklyn. It was there he learned the on-site, dry-aged process for quality prime beef. Buchner also worked at several restaurants in the Stuart area until he saw the building a block off Jensen Beach Boulevard and knew he had to buy it.

“We did not allow smoking and we only had beer and wine,” Buchner says. “People said you will never make it. But we have made it through 18 summers.” Peter’s Steakhouse offers beer and wine from around the world by the glass or bottle.

The secret to the taste of the steaks begins seven to eight weeks before it is served when the beef from corn-fed cattle from Colorado and Kansas arrives at Bush Brothers in West Palm Beach. The short loin of the cow is dry-aged and climate-controlled at 34 degrees with 34 percent humidity, receiving constant airflow from fans. The process breaks down the most fat for tenderization.

“We are Jensen Beach’s best kept secret,” Buchner says. “We have worked hard and people come back every year and we have 75 percent repeat customers.”

Jim Coolican is a snowbird from Michigan and board member for Vistana Beach Club on Hutchinson Island. “In June and December every year we have a board meeting and we have been coming here afterward for 18 years,” Coolican says. “We always come for dinner and it is always one of the highlights of our visits.”

“We have a nice atmosphere and if you are consistent, people will come back to you,” Buchner says.

When new customers arrive, the wait staff brings out garlic bread with Liptauer, a tasty Austrian spread made with butter, herbs and cream cheese. A boat of Peter’s Steak Sauce is available for dipping while the server explains the menu and how the service works.

With barely a word spoken between them, the servers carry out an order in a graceful presentation. “It is all about the service,” Hill-Howell says. “We work together as a team, a ‘well-oiled machine’ as one customer said. That was a big compliment.”

“We have a great staff. Most important I trust them and they trust me,” Buchner says. “Where would I be without them? I am nobody.”

Buchner advises even the stuffiest customers to eat the steak and enjoy the flavor.

“The closer to the bone, the sweeter the meat,” he tells them. “You are in my backyard now so pick up the bone and eat it.” Other steaks are sliced off at the bone in the kitchen. “You get all of the flavor without wrestling it off the bone.”

At age 72, Buchner shows no signs of stopping as he operates the restaurant out of a cubbyhole office barely larger than a phone booth.

“If I retired it would drive me crazy,” he says. ‘I love my employees and my customers are great people.
I am needed here.”