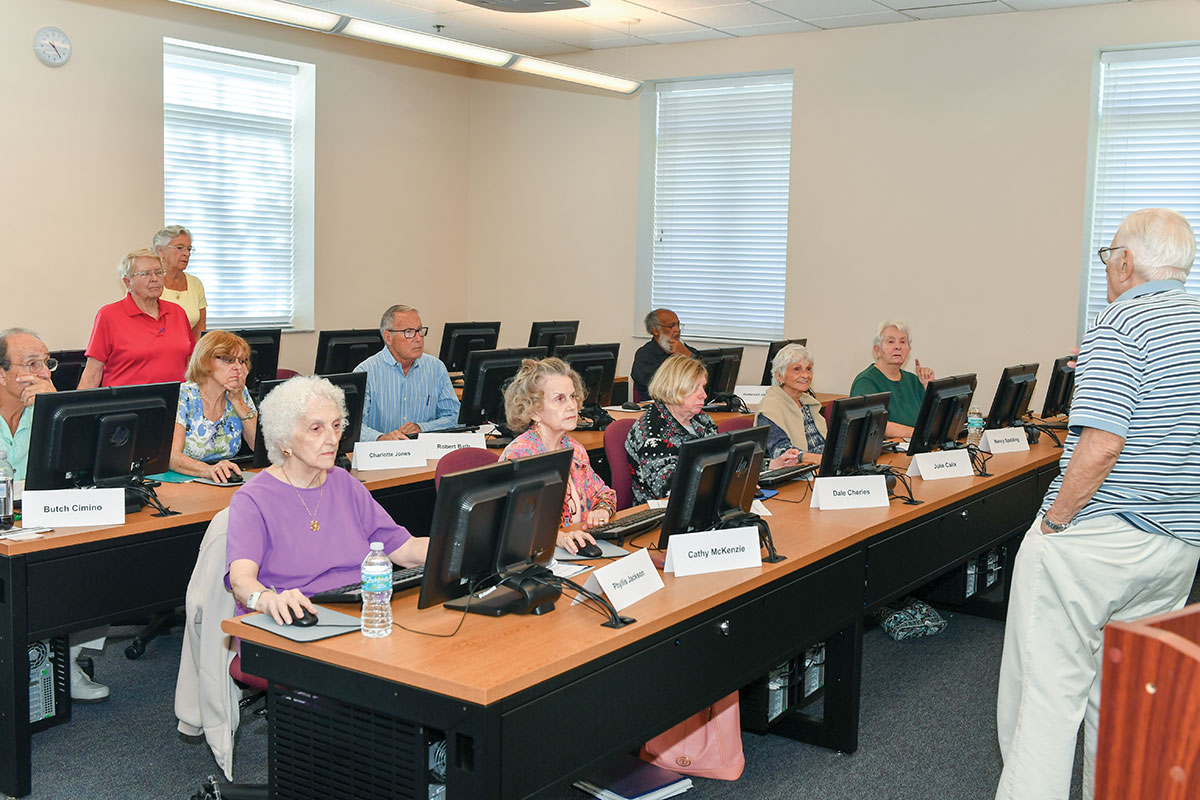 IRSC institute taps into the joy of socializing, sharing and lifelong learning

Intellectual stimulation, a chance for social interaction and learning for the sheer joy of it are all reasons for those in the over-50 crowd to become members of the Fielden Institute for Lifelong Learning at Indian River State College.

The program was endowed by Jean Dickinson Fielden in memory of her husband, John “Jack” Seward Fielden, who died in 2010 after spending a life of academia at the University of Illinois, Purdue and Harvard. He also served as dean of the business school at Boston University and at the University of Alabama, where he met Jean.

The program offers short courses in a variety of subjects in the four-county area IRSC serves. Members can take as many courses as they want, even traveling to neighboring counties for a course. Some classes are speaker/discussion sessions, while others are more hands-on learning.

“Jean Fielden was a professor, too,” program director Melissa DePriest explains. “She taught statistics, but her passion was reading and English.”

This passion led her to conduct a book and film course. Some courses are more popular than others, DePriest says, adding that Fielden’s film adaptations course is so popular in Indian River County that the institute has had to offer two of each session to accommodate all who want to take the class.

The classes are led by peer leaders who volunteer to share a topic that is their passion or an area of expertise. As an example, Mary Hurley, a peer leader in Okeechobee County, teaches a course on bridge that is highly popular.

POPULAR IN INDIAN RIVER
In Indian River County, which has the largest number of students and courses, Joan Edwards, a retired teacher who worked for years with the gifted students in Indian River County public schools, is a peer leader for a popular course, Our Dynamic Florida: Interconnections in Our Environment. The first three sessions involve classroom discussions on IRSC’s Mueller Campus in Vero Beach. For the fourth, the group meets at the Environmental Center in Wabasso for a nature hike guided by Edwards.

The peer leaders might have worked in a profession covered in the course or they just might have a passion for sharing what they’ve learned. That, in essence, is the program’s main focus: the sheer joy of learning. There are no grades or tests. The focus is on the social interaction and the intellectual stimulation.

The Main Campus in Fort Pierce offers a course on foreign films where peer leaders Alicemarie Donohue and David Kapell show a film and then lead a discussion about the choices made by the protagonists and the consequences of those choices. All of the films have English subtitles and reservations can be made by institute members and their guests.

Donohue began participating about seven years ago and then became a member of the external advisory committee five years ago. Now, she is the co-leader of the Foreign Film Series.

“I learned to like foreign films when I became a member of the institute,” Donohue says. “I never had time while I was working to get into this. This is one of the benefits of the Lifelong Learning Institute. It keeps my brain alive. There are only so many crossword puzzles you can do.”

SOMETHING FOR EVERYONE
If you are a history buff or enjoy political discussion, there are courses on famous battles, the math behind the Electoral College, aviation history, a historical review of the New York Stock Exchange, Scotland in the Dark Ages and ISIS.

Mary Ann Bryan, a longtime institute member who serves on the External Advisory Board, says she doesn’t think anyone would have a problem finding something to their liking. She and her husband, Buck, take several courses each year. They both enjoy the book and film adaptation course and take that one together.

“Last year, we took Dr. Arthur Rosen’s course The Dark Side of the Reformation and this year we signed up for his ISIS: On the Road to Armageddon,” Bryan says. “It was excellent. He is a marvelous teacher and very knowledgeable on this subject.”

There are also courses on meditation, pharmacological information, fitness and other health topics of interest to the over-50 population. There are more hands-on courses like painting and computer classes that focus on exploration of the internet.

In addition to overseeing the courses at the Fielden Institute, DePriest also works with the college’s Distinguished Lecture Series sponsored by Florida Power & Light Co. Guest speakers come to the college to speak on subjects such as energy, the environment, politics and health topics. Upcoming sessions include Alzheimer’s Disease: A Discussion on Research presented by guest speaker Dave Morgan, Ph.D. and Why Does America Lose Irregular Wars? by speaker Daniel Green, Ph.D. Nonmembers of the institute can attend the lectures for a $35 fee.

PAYS TO BE A MEMBER
Yearly membership is $50 and coincides with the college calendar year from Aug. 1-Jul. 31. Members can register for as many courses as they want, paying the membership rate, which is less than the nonmember rate.

In addition to the courses, members and others can also register for an annual trip. In 2016, 20 students went to Sedona, Ariz. and the Grand Canyon. The 2017 trip will be the Canadian Rockies by rail. The cost includes airfare, rail fees for sleeping cars, bus fares, some meals, sightseeing and hotel. The group will visit three Canadian National Parks: Banff, Jasper and Yoho, and visit Vancouver and Vancouver Island, British Columbia.

“A lot of the focus is on the social side,” DePriest says. “but it is also educational as we will have a guide with us at all times.”

The social side of the institute is one of its best attributes. Bryan says that the pluses go beyond the educational benefit of the courses, adding that she and her husband enjoy the social events involved and making new friends.

“We have a couple who married after they met through the institute,” DePriest says with a smile.

“I tell folks to give it a try,” says Donohue. “The courses are short and the peer leaders are leading classes based on their passion. It is a great opportunity.”

Course cost: Members can register for as many courses as they would like and pay lower fees for the courses. Those who do not join can register at the nonmember rate.

For more information: Visit www.irscfoundation.org and click on the menu icon at the bottom of the screen or call 462-4772.