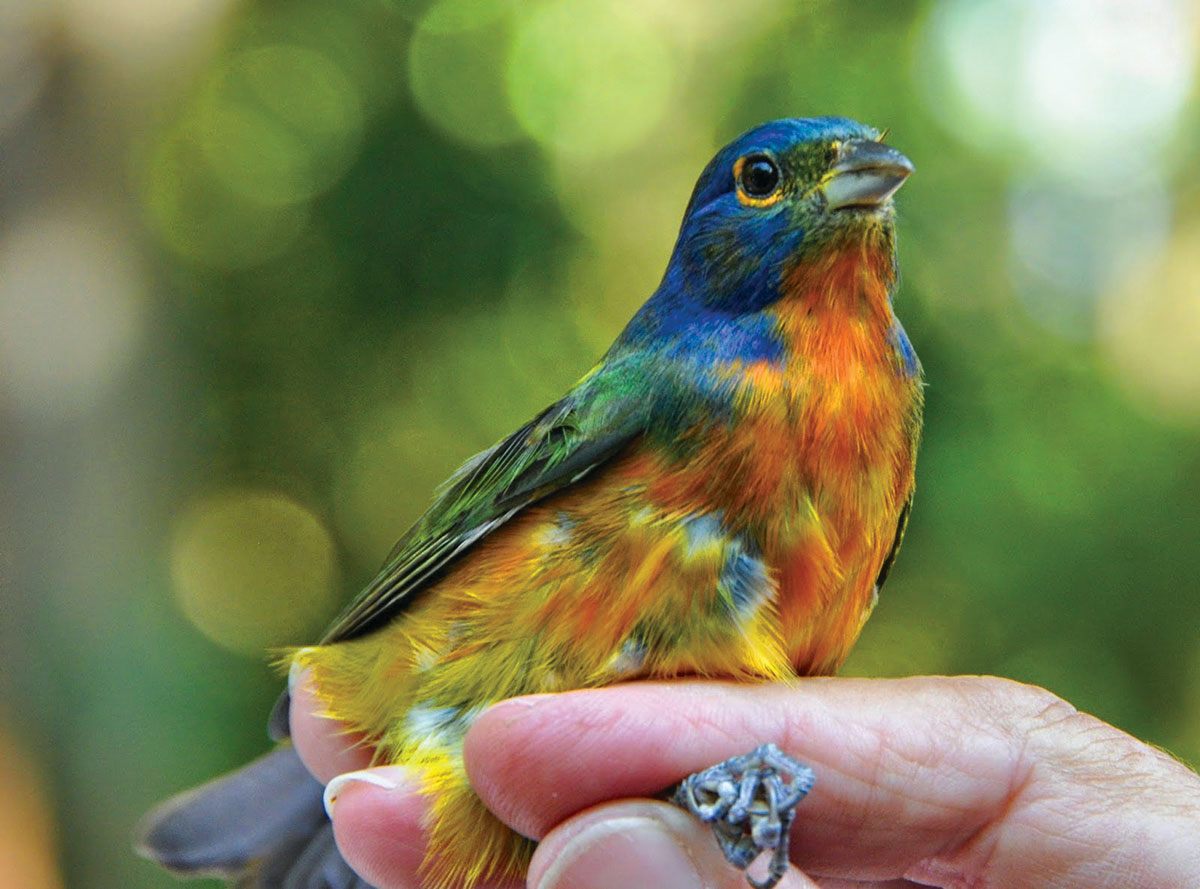 Biologist Nancy LaFramboise holds a painted bunting at Possum Long Nature Center. Her bird-banding team meets at the center every Tuesday, with nets going up at 6 a.m. The public can attending the bandings.

The Possum Long Nature Center in Stuart is a forest of birds, butterflies and greenery

Migrating birds can find Possum Long Nature Center, but most Treasure Coast residents don’t know it exists. The urban forest in the middle of Stuart, between Hibiscus Avenue and Palm Beach Road, is just a block south of busy East Ocean Boulevard. It was named for Clifton W. “Possum” Long, a beloved high school vocational agriculture teacher. The center was created 42 years ago by the Martin County Audubon Society with help from the Stuart Garden Club. Its nucleus was Possum’s modest home, where he started a nursery and was known for giving plants to his friends as gifts and to his former students as wedding presents. Possum acquired his nickname because he was able to catch students who misbehaved in study hall even when he appeared to be dozing. Most of us know that the expression “playing possum” comes from an opossum’s protective behavior of playing dead when frightened. His former students say Possum Long wasn’t frightening or the type to be frightened. At one time the high school’s football field was named in his honor. Today, the field has other uses, but the nature center that bears his name has been improved and becomes more valuable to the community as the years go by.

Lester Scherer, who lived and continues to live beside the Possum Long property, was active in the Martin County Audubon Society in 1973 when he became aware that it was in line for development. Preserving a green space for the public within the city limits of Stuart seemed like a good idea so he mentioned it during an Audubon meeting. Environmentalist Virginia Forrest, immediately replied, “Let’s buy it!” and wrote a check for the down payment. Lester Scherer became chairman of the steering committee to purchase the property and many of the folks who worked to fund and establish the Possum Long Nature Center have passed on and are now members of the Martin County School System’s Environmental Studies Center Hall of Fame.

Through the years additional parcels were added to the original purchase. The adjoining Button-Hill Nursery property and contiguous building lots were purchased by holding plant and rummage sales and pancake breakfasts. For years a “Possum Long Day” was officially celebrated. Volunteers have labored to keep vegetation under control through the years. Because the land had been cultivated, invasive species easily took hold. For a time seaside mahoe and potato vine were winning the war, but today they are under control and plants that provide food and shelter for birds are flourishing.

In 1999, the Martin County Audubon Society purchased the home of another Martin County High School teacher, the home that coach Joe McCoy built for his family in 1948, using material from Camp Murphy, the Army base that is today’s Jonathan Dickinson State Park. The home, on Palm Beach Road, was contiguous to the Possum Long Center property. It is now part of the Nature Center and as Audubon House provides office space for the Audubon Society of Martin County, a reference library and a meeting room. Behind it is a butterfly garden and one of several entrances to the property. A huge banyan tree shades an amphitheater and picnic tables. Inviting paths lead in every direction.

The former home of the center’s namesake, Possum Long, is used by the Stuart Garden Club. The club maintains the plantings surrounding the house. There are memorial plaques of historical significance such as the one honoring Anne Bates Leach as lifetime honorary president because she organized the Garden Club of Stuart, served as its first president, and, in 1937, hosted its first meeting at her estate, Tuckahoe, now Indian RiverSide Park.

Four years ago, a wetland sanctuary was created to handle neighborhood storm water and simultaneously provide habitat for birds and other wildlife.

Wood ducks, ospreys and yellow crowned night herons nest on the property and there is a banding project that monitors the birds that visit. The banding program began in October 2012 after Nancy LaFramboise, who has extensive experience in the field, moved to the area in 2011. The goal of the Possum Long bird banding station is to provide data for long-term studies of bird behavior.

The number of rare birds that have been banded has surprised even the Audubon authorities. Of particular interest, because of their beautiful plumage, are painted buntings. La Framboise’s team is working with the University of North Carolina on its painted bunting research.

John Nelson, president of the society, accepted the office with the understanding that the local organization would return to emphasis on public outreach and education.

Nelson has become the voice of Audubon with his “Audubon Moment” broadcast on public radio. It is hoped that the 60-second public service announcements will increase in number and be aired throughout the state with help from a grant from the Community Foundation of Palm Beach and Martin Counties.

Linda Wishney, educational director of Audubon of Martin County, says Possum Long Nature Center is an ideal open-air classroom for youngsters. One of her favorite programs is introducing youngsters from the nearby Gertrude Walden Child Care Center to binoculars and viewing birds.

Each November, Audubon of Martin County’s My Favorite Bird Essay and Art Contest is popular with school children.

Possum Long Nature Center has benefited from Eagle Scout projects through the years. Recently Reed Spicer of Troop 822 constructed and installed bird and plant identification signs throughout the property.

As it says on the Audubon of Martin County website, “If you haven’t enjoyed this green sanctuary we invite you to stop by, walk the trails, enjoy the butterfly garden, have a picnic or just spend a quiet hour looking for the many birds who stop by for food and rest. The grounds are open to the public at no charge every day from dawn to dusk.”

Migrating birds are able to find Possum Long Nature Center. We, too, should find our way to this sanctuary in the middle of Stuart.