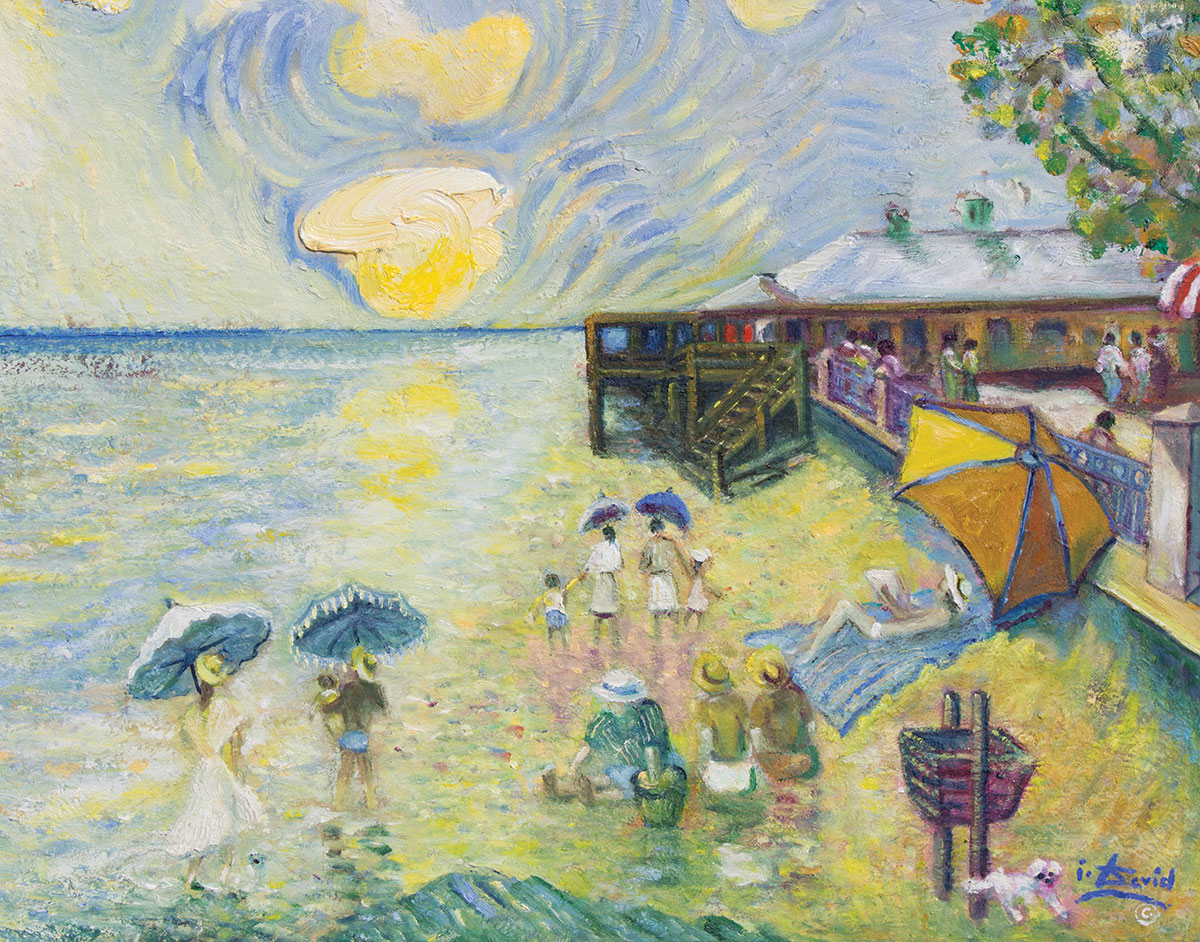 In the dozen or so years since Italian artist Ivo David settled in Vero Beach, his work has made its way into galleries, museums and private collections along the Treasure Coast. In 2009, David’s colorful interpretation of community festivities in downtown Vero Beach won the first fine art competition at the annual Hibiscus Festival. The vividly colored painting was recreated in posters and postcards and sold to benefit local charities.

In 2013, his painting of a Picnic on the Lagoon was awarded the Best of the Best ribbon in a juried competition at A.E. Backus Museum and Gallery in Fort Pierce. He exhibits frequently in Vero Beach Art Club shows and has paintings out on permanent loan. David’s latest local exhibition is a one-man show, opening on New Year’s Day at the Emerson Center’s Foyer Gallery in Vero Beach.

David was born into an artistic family in Italy; both his father and grandfather painted fine art. By the time he was 6, he was displaying a natural talent for drawing, so his parents gave him an assignment to draw a new subject every day. He says he never stopped studying and practicing once he discovered art, even through his years of rebellious living.

The young man spent what has been described by a biographer as a reckless, soul-searching youth. Although he always knew his destiny would be a lifetime of art, the road to that goal was a winding one, with more than a few bumps and potholes along the way.

At the end of WWII, not yet in his teens, David began studies at a Franciscan seminary but after a few years knew that it wasn’t the life for him. Out in the world again, against his parents’ wishes, he began five years of a classical curriculum at the High School of Science, Liceo Scientifico in Benevento, the Italian province where he was born.

With his parents relocated to the United States, David’s free-wheeling period followed. He worked on set design for a theater in Naples and opened art studios with a friend in Rome and Benevento. His cultural world and curiosity grew, as his fusionism painting style continued to take shape. He wrote his Manifesto of Fusionism, his theory that pulls together all the studies of the best in art, in 1956. In 1962, he joined his parents in northern New Jersey.

David’s birthplace, a small town in the Campania region of Italy northwest of Naples, had a quiet beauty, much like what he found in Vero Beach when he first visited in 2003.

“One of my art collectors living in Florida invited me to be their guest in Vero Beach” David said. “I was introduced to some of their friends ... and fell in love with this tranquil and inspiring location.”

By the following year, his Vero Beach studio home was under construction.

David says his paintings begin when he feels “inspired to represent a subject matter. Then I start putting down preliminary ideas ... .”

The medium he uses depends on that subject. For a landscape, he’ll begin with charcoal or an artist’s pen. “Then, after I have all the necessary information on canvas or special sketch paper, I will transfer (it) in watercolor or tempera medium. I will then use the one that will permit me to see better certain chiaroscuro at work and, ... then I may use oil color on canvas, board or special paper.”

If the paintings have a religious tone, as in his many scenes from Dante’s Inferno, he uses a different approach in his preliminary work. “I use first of all a very high charcoal base-medium (carbonella diluted in special spirits). The reason for this is to retain on paper or canvas, etc., the most important preliminary nuances of the subject: clothing garments, shadow, etc.” Generally, his medium of choice is the finest oil colors available.

His solo show at the Emerson Center in Vero Beach offers a glimpse into the artist’s diverse interests. Many of the paintings are local scenes as seen through an impressionist’s eye, a merging of his views of his adopted home and of a sun-drenched seaside of his homeland.

One painting, Ocean Grill Bathers, depicts a beach scene in front of the popular Vero Beach restaurant. Shield the boardwalk and the steps from view and you could be looking at a bathing party on the Mediterranean.

He captures the excitement of the many events held in Riverside Park with his Flea Market Under the Oaks, while the Vero Beach Marina painting, without the causeway in the background, could be of boaters in a small Italian port.

What: New works by Vero Beach artist Ivo David
Where: Foyer Gallery of Art at the Emerson Center, 1590 27th Ave., Vero Beach.
When: Now until Feb. 28; opening reception will be Jan. 12, 5-7 p.m., followed by a Florida Humanities Series lecture.
Admission: Open to the public at no charge.
For more information: visit www.ivodavidfineart.com