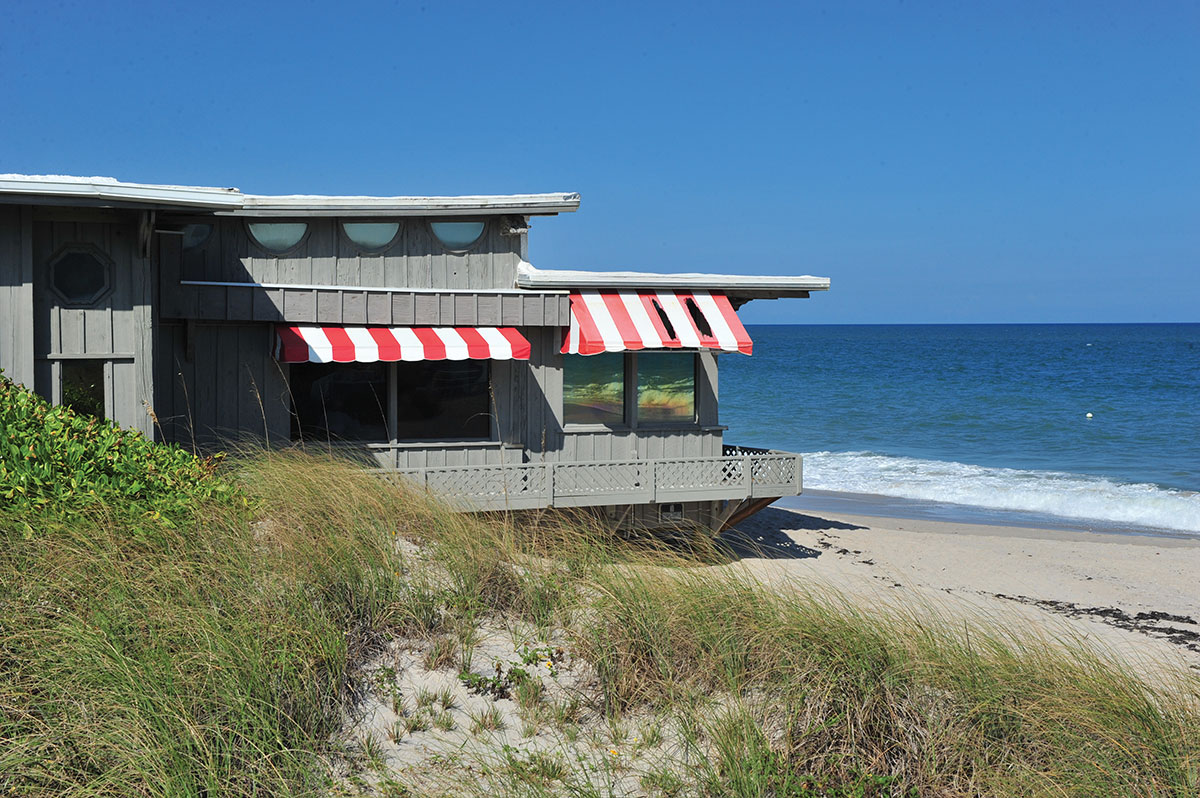 Perhaps no other Florida restaurant has such proximity to the Atlantic Ocean.

Customers have returned for food, view since 1941

The Ocean Grill is a rare entity in the restaurant world.

The Vero Beach landmark in Sexton Plaza is a monument to longevity in a business that is highly fickle. It is a touchstone for Vero Beach residents, who can count generations who have dined there. It brings back memories of prom dates, first jobs as relish cart servers, and even the first bite of exotic ingredients like frog legs, raw oysters and escargot. It has loyal employees who have worked there for decades.

And, despite its age, the restaurant never gets old.

When the idiosyncratic Waldo Sexton erected his dining room by the sea in 1941, probably even he could not imagine that it would survive as long as it has. Twice, the encroaching ocean has threatened to sweep it away. A photograph of the building made the front page of The New York Times following one storm that all but left it in the surf. But the paean to pecky cypress, wrought iron grillwork and eccentric design has held firm, now bolstered by modern engineering techniques that have allowed it to stay on its perch, just inches away from blue Atlantic waters.

There is perhaps no other oceanfront dining room that can boast such proximity, although when Sexton built the restaurant it was several hundred yards from the water.

In the corner of the restaurant’s bar is a little bench for two that looks out over the ocean, and if you are lucky enough to sit there, it is almost like riding in the bow of a ship, the water is so close.

The restaurant itself is part art museum, part collectible display, part Florida kitsch. Paintings by A.E. “Bean” Backus, who was a friend of Sexton’s, are hung in various places throughout the restaurant, including a large painting of Seminole Indians that resides prominently on the wall in the restaurant’s side dining room, dubbed the “birdcage” because of its wrought iron gate. There is also a painting by one of the original Highwaymen, James Gibson.

Mix that in with a trophy mounted sailfish caught by local resident Dr. Donald Ames, whose wife decided she didn’t want it in their own home, and a variety of treasures gathered by Sexton — Spanish antiques, artifacts, wrought iron chandeliers, a Honduran mahogany round table that is one of the largest in the world and was supposedly moved into its prominent spot by taking down one of the building’s walls, and myriad stained glass windows throughout — and you’ve got one of the most unique dining environments on the planet.

The Ocean Grill is family-friendly, yet romantic. When celebrities are in the area, they make a point to visit. Frank Sinatra dined there, along with a whole host of big names from Gloria Estefan to Emeril Lagasse.

The building itself is still owned by Sexton’s family, who maintains the eclectic collection. However, since 1965, the restaurant’s operation has been in the hands of the Replogle family, who elevated it into one of the best places to dine in Florida, a title it has held for half a century.

That is why I am glad to say that as a teenager I came to help shore up the building, along with many others, when it was close to falling into the sea back in 1974 and looked as if it might not last another year. Later, my husband and I dined there on our honeymoon, and many years later, I brought my 30-year-old daughter there for the first time.

And my story is just one of many. A call out to reminisce about the restaurant on the Facebook page “Growing Up in Vero Beach” brought a host of memories, from marriage proposals to sighting celebrities like Jimmy Buffett and Leonard Nimoy to family traditions that included a fancy dinner — and good manners — at the Ocean Grill.

Although the Ocean Grill charms with its character and location, it is the food that keeps diners coming in. Many of the dishes on the menu are from the Replogle family and have been served there for 50 years, such as the Crab au Gratin ($30.95), a classic version of jumbo lump crabmeat in a sherry cream sauce topped with Parmesan.

Manager Beth Eriksen, who has worked there for 30 years, says she remembers calling owner Charley Replogle, who was on vacation in Wyoming, with the news that a hurricane was approaching. “I asked him if there was anything specific I should take out to keep safe and he told me, ‘Just get my books of recipes.’”

Chef Timm McGraw — a Culinary Institute of America graduate who joined the staff in 1990 — makes certain the restaurant serves fresh fish from local waters and locally sourced ingredients, and puts his own culinary mark on the special entrees.

But let’s talk cocktails first. Even if you’re a teetotaler, the Ocean Grill’s bar can’t be missed. Put your name in for a table — the restaurant does not take reservations except for parties of five or more — and relax while you watch the surf with some of the best cocktails on the Treasure Coast made by some of the best bartenders around. On one recent excursion, my mother enjoyed her favorite, a Sidecar ($7.25), a pre-Prohibition cocktail that combines Cointreau, cognac and lemon juice in a frothy concoction served in a sugar-rimmed cocktail glass. It seemed an appropriate drink for the classic setting.

Our party of five was seated in the area of the restaurant called “the bucket,” a throwback to the time when the restaurant was known as the Bloody Bucket, where most tables have ocean views. One highly coveted table gives diners a nearly panoramic view, but I’ve only been lucky enough to be seated there once. Still, each spot in the restaurant gives you a different view and there is always something interesting to see.

While we looked over the menu, we munched on crackers and the restaurant’s famous blue cheese spread, a zippy start to a meal.

We started with an appetizer of baked brie in puff pastry ($12.95) that was drizzled with sweet chili. It was served — curiously — with a variety of vegetables that didn’t seem to match the dish, unless eating a stalk of broccoli is an antidote to the health effects of gooey, melted cheese.

The onion soup au gratin, ($5.95) was a rich, beef broth, served traditionally with french bread and melted Swiss cheese, a good version of the classic.

We also tried the homemade onion rings, which the menu declared were “marvelous.” They came in three sizes — a mountain for $8.95, a hill for $6.95 and a molehill for $4.95, but we found ours pretty ordinary, although we were impressed that the onion and its crispy fried shell held together.

On the main course side, the Ocean Grill aims to please everyone from meat lovers to vegetarians. All the beef is hand-cut in the kitchen, and if the finished product is served with béarnaise sauce, even better.

The prime rib ($30.95) was a thick slice that was pink all the way through its 14 ounces and had a nice, beefy flavor.

The restaurant’s roast duckling ($27.95) is another dish that has garnered fame. It was a half of a duck, cooked to tenderness and then broiled to crisp the skin. It was served with a not too sweet orange sauce, braised red cabbage and wild rice flecked with pecans.

Seafood is where the Ocean Grill shines and it is hard to choose between jumbo lump crab cakes ($29.95), fried oysters ($24.95), the famous crab au gratin, or the daily specials that include locally caught fish.

The local pompano broiled and served with a lemon butter sauce ($31.95) was delicate and delicious, while the Parmesan and panko-crusted snapper served with a lump crab and cream sauce ($28.95) was the standout.

And since two sides come with every entrée, we had an embarrassment of riches in choices of salad, creamed spinach, baked potato, cole slaw, french fries, sweet potato, homemade smashed potatoes or the spicy stuffed potato.

Little wonder that our excellent server seemed a little surprised when we ordered dessert. Among the many offerings of pies, cheesecakes, cakes and crème brulee, we decided to share the restaurant’s house specialty, the Schaum torte ($9).

A basket made of hard meringue held two scoops of vanilla ice cream, a drizzle of hot fudge and whipped cream on top, like a hot fudge sundae with a delightful sweet crunch that was almost electrifying to the taste buds.

On our way out, we stopped and gazed out at the ocean and the sky filled with stars. Yes, dining at the Ocean Grill is an experience, and one we hope to have for years to come.