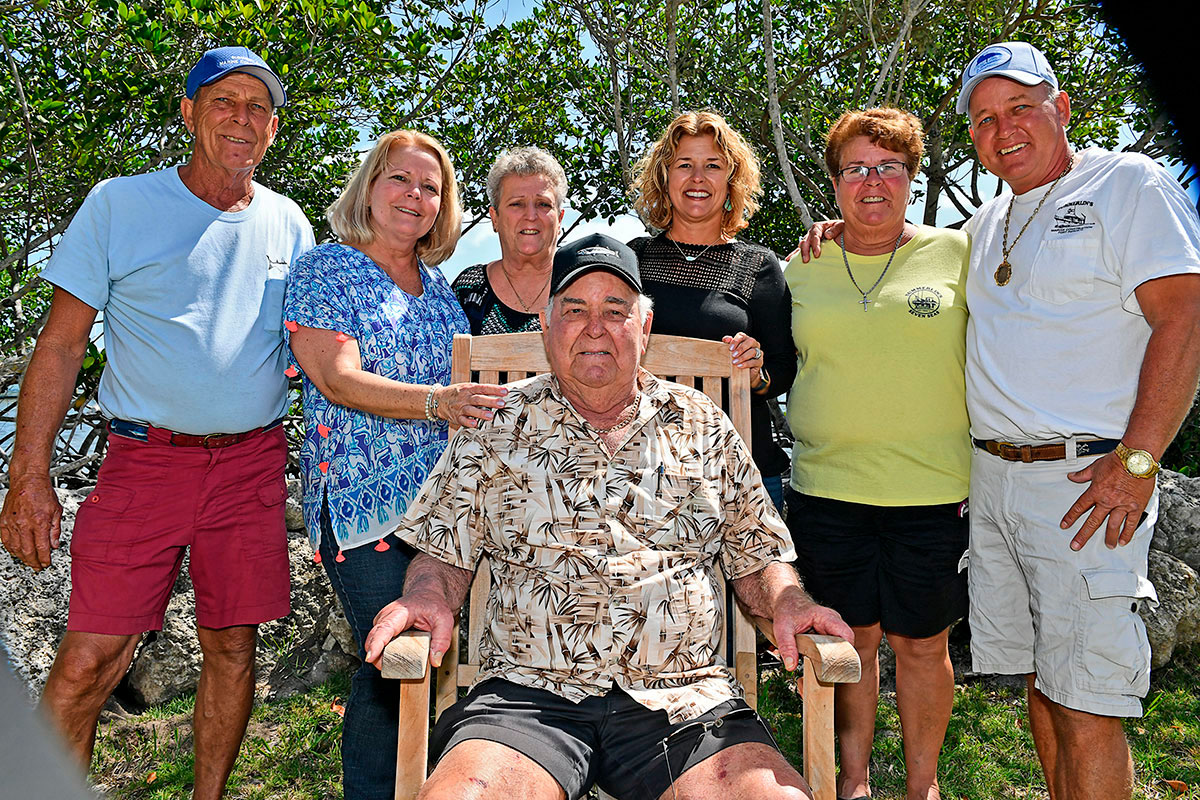 Fish fries are a labor of love for the Summerlin family

There are no secret spices like the Colonel advertises or special sauce like McDonald’s. The only things you find when you attend a Summerlin fish fry is honest-to-goodness fresh fish with all the fixings. This is the secret of the tradition Herman Summerlin has carried on in St. Lucie County for decades. He learned it from his daddy and his children learned it from him.

Carrying on family traditions is important to Peggy Summerlin Allen and her siblings. For that reason, they get together, thanks to the organizational skills of sister Jan Summerlin Hagan, to dish up some of the tastiest fried fish and hush puppies served on the Treasure Coast. Sister Susie Summerlin Quandt is always available to lend a helping hand. The number of people lined up for a great-tasting fried mahi-mahi sandwich during the Treasure Coast History Festival in January is a testament to that.

For these fourth-generation St. Lucie countians, it is a labor of love. No one has the time these days to go out and catch the load of fish needed for a community fry, so the fish is purchased, filleted and fried, just as Herman taught them.

Peggy, a cosmetologist and owner of Riverview Hair Design, grew up helping her father prepare and serve fish fries locally for many community causes. She figures she started before her teens.

“It was daddy’s way of keeping us busy as kids,” she says. “I always tell my new customers that I learned how to fillet a fish at age 10, so cutting hair is no problem,” she adds with a laugh.

EARLY BEGINNINGS
Herman, one of several children of Richard “Dick” Summerlin and his wife, Claudia, grew up on the shores of the Indian River. Dick was a fishing guide and, like many other men in those years after the Great Depression, earned extra money working for the Works Progress Administration.

Peggy and Herman chuckle as they remember the oft-repeated slogan: Work for the WPA for a Dollar a Day. Herman adds that in those tough days, almost everyone he knew worked for the WPA at some point.

Just like his children, Herman got his start as a youngster helping his father prepare for community fish fries in the 1940s and 1950s. People used the fish fries as a social event back then, Herman says, adding that in those days they would think of any excuse to get together to talk and eat as a community.

The men would catch the fish, cut them up and prepare them for cooking. Herman says one of his jobs was to go to Bell Bakeries to pick up the lard the company would donate for the frying.

“I loved to go to the bakery,” the soon-to-be 79-year-old says, “it always smelled so wonderful and sometimes they would give me a loaf of fresh bread. My daddy did a lot of them (fish fries) for the Parent Teacher Association. We did them at the old schoolhouse in St. Lucie Village.”

During his teen years, Herman worked nights at Baywood Fisheries on the South Beach Causeway filleting fish for the next day’s sales. At age 25, he opened Summerlin’s Seafood near Avenue D on North Seventh Street. Along with operating the fish market, Herman also had fishing boats and crews working to provide the fish for sale.

Often, church groups would come to him for help with their own fish fries. Never one to turn his back on a worthy cause, Herman would donate fish for the church events. A few years later, the owners of Baywood Fisheries wanted to retire. They approached Herman about buying their business. He renamed it Summerlin’s Baywood Fisheries, eventually moving the business from the causeway to the corner of Binney and Seaway drives on South Beach and entering in a partnership with his brother, Astor. As was the tradition, the kids helped with the businesses.

BUSINESS, FAMILY GROWTH
As his family grew, his sons, Herman Roy Jr., known as Roy, Sam and David, learned to operate boats and fish on days off from school. The girls: Susie, Jan, Peggy and Joy also learned to help in the family businesses. Married several times, Herman has seven children. They consider themselves siblings and work together to help their father carry on his work and the family traditions. In the 1970s, as growth in Florida was booming, Herman started a marine construction company, putting in docks and seawalls. He also opened the 7 Seas Fish Market on North U.S 1.

The children, with children and grandchildren of their own, have carried on. The fish market was sold years ago, but Roy, Sam and Joy took over ownership and operation of Summerlin’s Marine Construction. Joy, the youngest, is a licensed marine contractor. Her husband, Robbie Yancy, also works in the business.

“We are slammed,” Joy says, “but we stay small to put out quality work. There was a lot of damage when Hurricane Matthew skirted us and we have been so busy since then. I try to engineer the solutions to any problems with the dock building. It is getting trickier as the tides are coming up to a higher norm, which is affecting dock construction.”

Since its inception, the company has salvaged many vessels washed up on the beaches or sunk offshore. “Dad would do just about any job for an extra dollar,” Joy adds, with a laugh.

Roy, through the construction company, assists the State of Florida by replacing, erecting and maintaining the No Wake/Minimum Wake manatee signs on waterways around the state. This is something that started back when it was Summerlin’s 7 Seas Construction Co.

FEEDING THOUSANDS
Herman recalls a fish fry he set up for the 1963 dedication of the Banty Saunders Bridge on the North Beach Causeway where he fed 1,000 people. At another event in Vero Beach, 2,200 people were fed. The Summerlin family recently set up a fish fry at the Little Jim Fish Camp on North Hutchinson Island as part of the 60th anniversary of St. Lucie County’s Sandy Shoes Festival, where they fed about 150 people.

Herman was asked by his former classmates to do a fry for the 60th reunion of the former Dan McCarty High School Class of 1957 at the St. Lucie Village School, where many of the alumni started their educations back in the 1940s.

The fish fries were just one of many Summerlin traditions. The annual migration of Summerlins to the Bahamas every July is another. Due to the shortage of fish in the heat of the summer and the lower number of customers, Herman says he would close the fish market and the businesses for the month and take a number of boats and all of the kids to the Bahamas. This is something the family still does on a smaller scale.

Yet another tradition is the Christmas Boat Parade in Fort Pierce, which was first organized by Herman about 25 years ago in Fort Pierce. Son Sam has continued this community outreach by participating in the marine parade and maintaining a float for Fort Pierce’s Sights and Sounds on Second Street, a Christmas festival and parade organized through Main Street Fort Pierce. Peggy says Sam loves playing Santa Claus, sailing down the river in a sleigh drawn by lighted seahorses.

As the siblings love to get together, Peggy says everyone’s favorite tradition is gathering at St. Lucie Village for Thanksgiving. Herman has always brought them all together for the holiday. This gathering of the Summerlin clan can draw as many as 65-75 family members, she adds.

Which just goes to reinforce the old adage that a family that works and plays together, stays together.