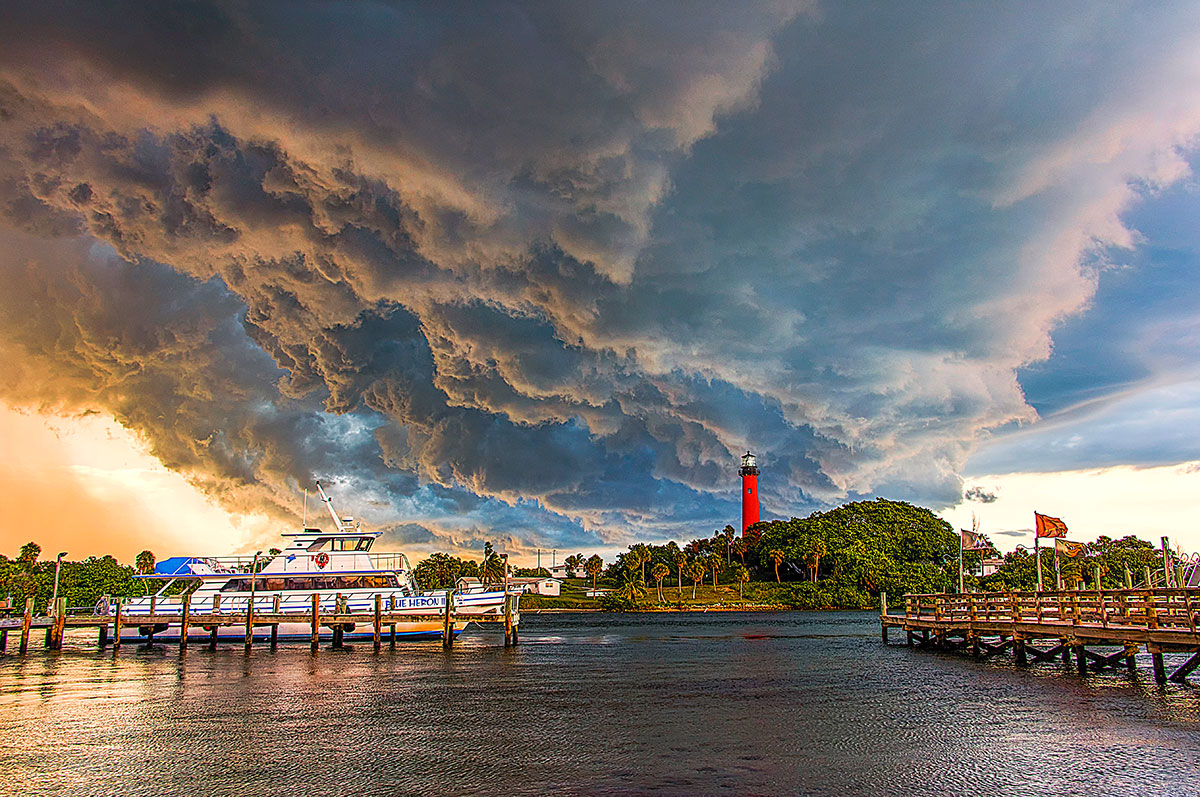 Ominous clouds over the Jupiter Inlet in the days before Hurricane Irma portend the storm’s fury. JIM MANDEVILLE PHOTO

Compared to the damage wrought by hurricanes Frances and Jeanne in 2004, Treasure Coast residents fared much better with monster storm Hurricane Irma, whose winds terrorized everyone in its predicted path before making it to South Florida.

Frances and Jeanne landed on Treasure Coast shores while Irma landed on the gulf side of the state.

The Fort Pierce Marina, where in 2004 boats were smashed into splinters, docks were torn out and it took about a dozen years to recover, sailed through in fine shape, manager Dean Kubitschek said. “No boats or docks were down, although two boats had to be pumped.”

Manmade islands designed and installed after Frances and Jeanne did their job and protected the waterfront, he said. The new fishing dock wasn’t damaged but the seawall by the dock was breached.

The city marina in Vero Beach did better than it had in previous hurricanes, said Joe Flescher, chairman of the Indian River County Commission.

The record-breaking storm’s path wobbled for days. But as people watched and prayed, horrified by the flattening of Barbuda with almost unimaginable 185 mph winds, followed by devastation of the Virgin Islands and the northern part of Cuba, the path began to change.

Though it first threatened to pulverize the east coast of Florida, it gradually crept toward the gulf side before making landfall on Sept. 11 at Cudjoe Key near Key West with screaming 140 mph winds that tore up or demolished buildings in their path.

After making a furious double landfall in Florida, first in the keys as a Category 4 hurricane and then near Naples on Marco Island as a Category 3 with 130 mph winds, it swung east and north across the state, hitting the Treasure Coast with tropical storm force winds as low as 55 mph but gusting higher, and low Category 1 hurricane force winds of about 75 mph in a some places. Gusts in those areas went to 100 mph, damaging trees, roofs and some docks.

Frightened residents across the state, Treasure Coast people among them, fled ahead of the storm in the biggest evacuation in the state’s history. Perhaps sensitized by the devastation of Hurricane Harvey in Texas shortly before Irma reared her ugly head, and perhaps energized and motivated by the pleas of Gov. Rick Scott and local officials, people packed up and left early, not waiting until the storm was upon them to decide.

Local emergency managers along the Treasure Coast said they thought residents and local governments were more prepared than they ever had been in the past.

“We were all ready for a Category 4 and we got a Category 1,” said Sam Amerson, interim city manager of Stuart.

Stocking up early left grocery store shelves empty earlier than usual, but stores also had time to restock. Although fuel supplies did run short, the state was prepared and tankers came in, some with security escorts. A new law requiring gas stations to have generators, helped, Treasure Coast officials said.

Many who stayed headed for shelters. St. Lucie County Administrator Howard Tipton said there were 3,300 people in that county’s shelters, with 250 people and their 150 caregivers in a special needs shelter, plus 65 pets in the county’s long awaited pet-friendly shelter. More people than usual left the barrier islands, he said.

In 2004, the county used its civic center for a special needs shelter, said county spokesman Erick Gill, but part of the roof collapsed. The civic center was demolished and the Fenn Center was used in its place this year. The county live-streamed its briefings for Matthew last year and Irma this year from the Emergency Operations Center to Facebook where TV stations could pick it up. The briefings had a sign language interpreter and were also given in Spanish and Creole. “I know our reach (for Irma) was more than 300,000 people,” he said.

MANY TOOK TO SHELTER

People were more prepared but so were their governments. Flescher said Indian River County had a new Emergency Operations Center replacing a leaky old EOC and the agencies involved were well coordinated. Howard Tipton said St. Lucie County’s agencies coordinated well and noted that it isn’t easy to find a way for so many agencies with so many different missions to pull together as one unit.

Fort Pierce was “very prepared for this storm,” Mayor Linda Hudson said. Structural damage was limited, compared to the destruction of Frances and Jeanne when many building roofs were covered with blue tarps, courtesy of the Army Corps of Engineers Blue Roof Program. That program is back and available if roof leaks are discovered.

“We have received much praise as a result of the constant flow of information to our citizens via social media, which was pretty much nonexistent in Frances and Jeanne,” Hudson said.

Port St. Lucie sent out more than 18 press releases detailing everything the city was doing to prepare and then to recover from the storm. Social media helped, said spokeswoman Sarah Prohaska. The flow of information far exceeded the city’s official communications during Frances and Jeanne.

Long cavalcades of linemen from power companies all over the country and Canada hit the highways in their trucks, headed for Florida where more than 6 million people were without electricity.

hile some local residents reported that they never lost electricity throughout Hurricane Irma, thousands of others did. Indian River County’s Flescher said 45,000 residents of his county were without power at the height of the storm.

Fort Pierce Utilities Authority had to restore power to more than 83 percent of its customers and did so by Sept. 18, using its own 14 linesmen and 22 from Michigan. Florida Power and Light, with 4.4 million customers affected across the state had 14,000 from around the country workers to assist with repairs.

There was some flooding, but nothing like there was during Tropical Storm Fay or hurricanes Jeanne and Frances, officials said.

In Fort Pierce, Sabal Chase Apartments, Orange Blossom Business Center (formerly Mall) and its parking lot, and Isola Bella predictably flooded. Skatetown on Orange Avenue flooded so badly that the skating rink’s floor was ruined. In Indian River County, there was flooding in Fellsmere and in Vero Lake Estates. Stuart and Martin County had minimal flooding.

Port St. Lucie, notorious in the past for flooding after heavy rains, escaped this time, Public Works Director James Angstadt said. A few years ago, the city embarked on an ambitious plan to fix the drainage in the eastern half of the city and it succeeded. Before Irma, the city began lowering the water in the canals that catch stormwater — it takes several days, he said. So even though water collected in swales, it drained to the canals very quickly. A backup pumping system was also installed so it could take over in case the primary pumps failed.

Officials in the cities and three Treasure Coast counties agreed that Hurricane Matthew last year did a good job of pruning off dead wood and as a result, Irma’s vegetative destruction was not as bad as it could have been. The cities and counties hired vegetation debris contractors to pick up the large piles that resulted from cleanups.

It could be a month or more from the time Irma hit until the trees and palm fronds are all picked up.

Overall, damage to Treasure Coast structures was less than in 2004. Martin County sustained $4.5 million in damages throughout the county, according to preliminary figures.

Stuart’s popular RiverWalk, a boardwalk structure on pilings above the river was damaged, Amerson said, but Irma was kind compared with Frances and Jeanne, which ripped the boardwalk to shreds. On the bright side, the rebuilt boardwalk was much better. Docks that stick off the boardwalk out in the river were damaged, though.

“Overall, I’m thankful,” Flescher said summing up the feelings of officials and residents in all three counties. “It could have been a Category 5.”

St. Lucie County: as of 9/22, still being estimated according to their spokesman.