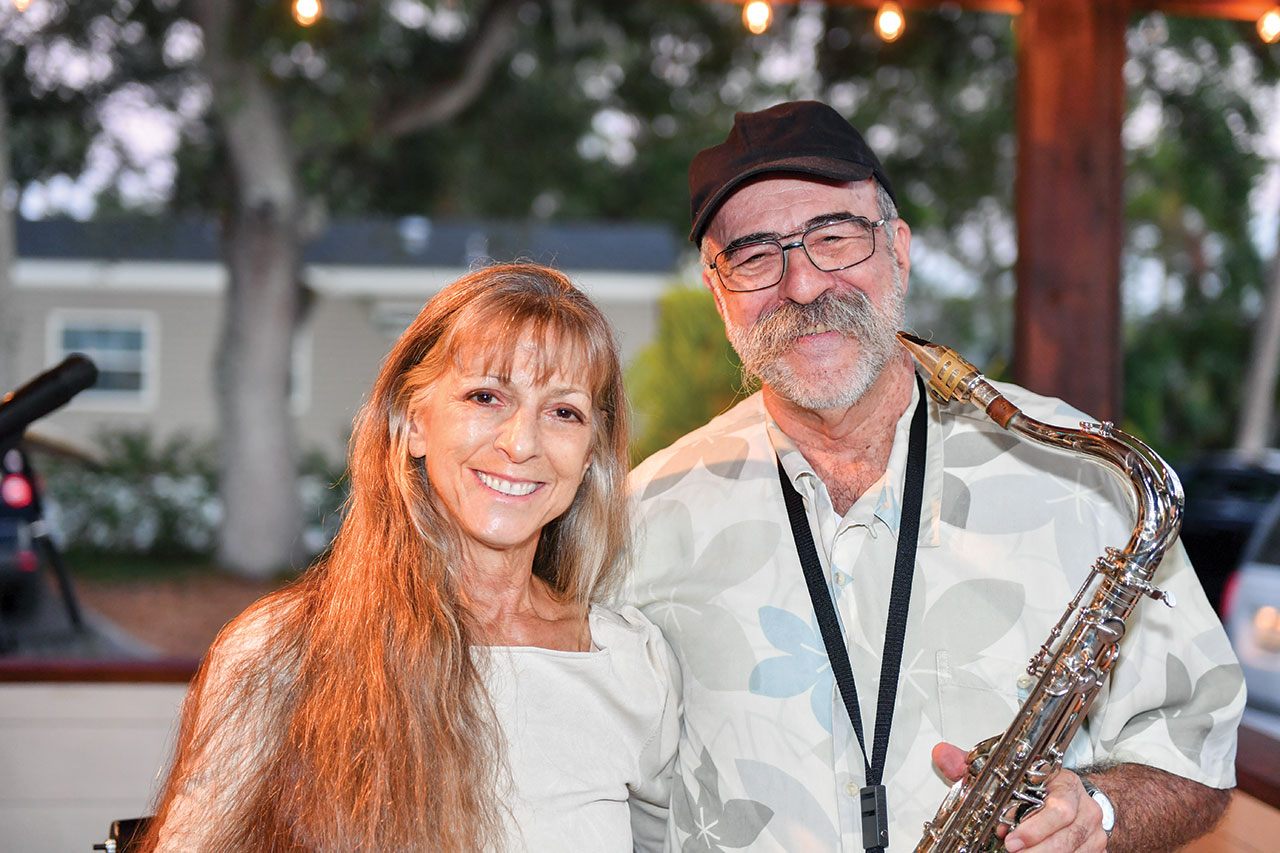 Leilani Chandler and Bob Norton met in 1978 and formed a partnership that has lasted musically and personally ever since. ED DRONDOSKI PHOTO

Their relationship began like the Frank Sinatra tune Strangers in the Night. Bob Norton was playing in a band at the Yellow Submarine lounge on North Hutchinson Island in the 1970s when little did he know that love was just a glance away as he looked out and saw a girl with the most beautiful smile he had ever seen. He was to remember that night and Leilani Chandler, the girl with the dazzling smile.

Years passed. It was 1978. Chandler, who had been married and divorced, was talked into going with friends to Seymour’s Inn in Jensen Beach (now Conchy Joe’s) to “see a cute guy in the band playing there.”

When the band took a break, Norton “walked by and gave me a smile, then he sat down and started talking,” Chandler recalled. “It was like we were just catching up and we’ve been talking ever since.”

To Norton, who had also been married and divorced, it was like those Sinatra lyrics: Something in your smile was so exciting, something in my heart told me I must have you. The two arranged to go on a date and have been in love ever since and making beautiful music as The Sophisticats.

“We warmed up for Motown bands and did studio tracks back in the 1960s, based out of the Bay City/Saginaw area,” Norton said. “Our band was going to sign with Motown, but the deal fell through when the finances didn’t come together. I moved back to Florida, with a wife and two kids, and worked for BellSouth, playing in bands on the weekends. My wife and I parted ways, and I started playing music full time.”

Over the years, Norton has mastered seven instruments, including the guitar, bass and drums, all of which he plays in The Sophisticats. Chandler, who provides vocals and plays the guitar, also got an early start in the business, playing her first professional gig at age 15.

When they first began dating, they were playing in different bands. They also played in the same band, but as “things got strange, as they often do in musical groups, we pulled out in 1985 and formed The Sophisticats,” Chandler explained.

They started playing in lounges and at private parties around South Florida before joining Carnival Cruise Lines, where they polished their act, adding songs to their repertoire that ranges from New Age to classic oldies and everything in between. They have 550 songs on their playlist.

“We learned a lot on the cruise ships,” Chandler said. “The longer you stand up there, the audience will tell you what they want to hear. We took requests written on napkins and built our repertoire.”

The duo spent nearly four years on the cruise ships and another four years playing on a dinner cruise that sailed out of Hollywood.

“We set all-time lounge records on the cruise ships,” Chandler said. “They take revenue to decide that. We even beat the disco one time.

“Hot, Hot, Hot was the song back then,” she said. “We would get the guests in our lounge to start a conga line and have them go to the disco next door and pick up people along the way and bring them back to our lounge. We learned to play straight through without a break.”

Chandler smiled as she remembered a time when they were playing in Stuart while a woman, who had been sitting at a table next to the stage, quietly watched them. Then Norton suggested they play Woolly Bully.

“This woman leapt out of her chair and shouted, ‘It’s a pony’ and took off for the dance floor doing the steps I remembered from high school.”

In their 30-plus years together, the couple has played throughout Florida, performing at restaurants and clubs, yacht and country clubs and private parties. And in Fort Pierce, they have a standing gig on Tuesday afternoons at Little Jim Bridge Fish Camp and a few nights a month at Coyote Grill in Road Runner RV Resort. Another favorite place to play is the Seminole casino at Brighton, west of Okeechobee. “Everyone is so nice there,” Norton said. “They jump at the chance to help you.”

The only time they practice, the two said, is when they are learning a new instrument or a new song.

“During slow times in the summer, we will play and sing in our living room just to keep ourselves in shape,” Norton said. “We make our own tracks on all instruments and then work on vocals.”

Norton’s other business helps get them through the slow season. He creates track fragments through a music processor and sells them on www.nortonmusic.com.