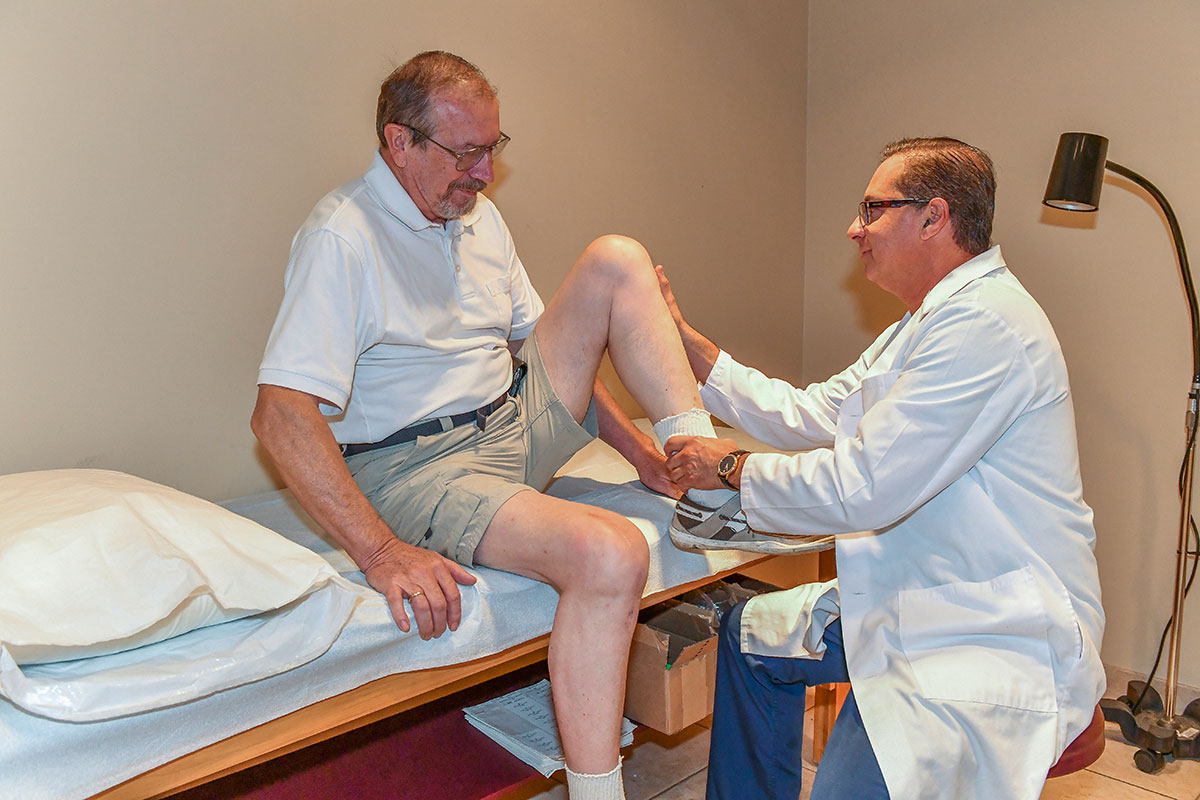 Surgical procedure fits a custom-made knee implant to the patient

Created by ConforMIS, the state-of-the-art knee implant used by Dr. Edward Rossario has eased the pain of replacement for many with damaged knees.

“I did the research and the science was there,” he explained. “I said to myself, ‘Maybe there is something to this.’ I had about an 88 percent rate of satisfaction with my knee replacement patients, but I wanted to get to 100 percent. With ConforMIS, my rate has gone from 88 to 98 percent satisfaction.

“Every surgeon wants all of the patients to be satisfied with their procedure.”

Rather than a stock off-the-shelf knee, which comes in sizes like small, medium and large, the pieces to be replaced in the knee are made to measure from a CT scan of the patient’s leg from hip to ankle. The full scan allows the parts to be sized to straighten the leg.

MORE CUTTING
The problem with the stock knee replacements, the Port St. Lucie surgeon said, is that there had to be a lot more cutting to fit the replacement to the patient’s anatomy. Sometimes, he said, they are a bit too big and sometimes a bit too small. There are not unlimited sizes. With ConforMIS, which is designed to fit exactly to the patient’s anatomy, there is a bit less time in the operating room with the saw and drill.

The implant is “the only implant that respects the patient’s anatomy,” he said.

There is also less bleeding than in the regular procedure, in which a rod is pushed into the bone marrow of the femur, causing a lot of blood loss. ConforMIS implants and instruments are designed based on the patient’s CT scan.

“An automated design process uses proprietary algorithms to map the articular surface of the joint in three dimensions. The software uses that information to design the implants and instrumentation that will match precisely to the 3D model of the knee, correcting the data entry for any underlying arthritic deformity such as bone spurs, cysts or flattening of the joint.

“Customized instrumentation reduces the number of required instruments and steps in the surgical technique. The disposable instrumentation also comes in a pre-sterilized box along with the implant, reducing the need for inventory and re-sterilization,” according to the company’s literature.

MENTOR AND TRAINER
A surgeon for 21 years, Rossario trains surgeons from around the country and the world in the surgical procedure. A graduate of the University of Miami Medical School, he mentors third-year medical students from Florida State University Medical School’s campus at Indian River State College as they rotate through orthopedic studies.

It reminds him of his fourth year in medical school when he went to Akron, Ohio, to study with Dr. Thomas Bear, who is now with the Crystal Clinic Orthopaedic Center in Cuyahoga Falls, Ohio. Bear recently came to Port St. Lucie to learn how to do this procedure from his former student.

When patients come to Rossario at Coastal Orthopaedics & Sports Medicine for relief from their knee pain and a replacement is recommended, the patients are referred to an imaging center for CT scan that is then sent to ConforMIS in Boston. After proprietary algorithms convert the scan into a 3-D model by mapping the surface of the joint, the measurements are sent to a laboratory. Using 3-D printing, a toolkit is created with all the parts made specifically for a patient.

“You are bringing the patient back to what a normal, anatomic knee should look like,” he said. “You are matching j-curves, you are matching patient slope. None of the other implants are doing that.”

Rossario further explained that with a stock knee, a surgeon lops off the end of the femur in a flat cut, but the femoral condyles are not flat, they are offset. With the stock knee, you are cutting off more than you need to. There is no adaptation for the j-curves of the knee. ConforMIS is the only replacement he has found that affords the patient full arc of motion from full extension to full flexion.

Rossario also thinks that some of the knee replacement failures might be an undiagnosed allergy to nickel.

“A few patients are allergic to nickel,” he said. “They can’t have any knee replacement except a totally titanium product. The allergy is rare, but if someone mentions it, they are immediately sent to be tested. The number is small; it’s only about 1 percent of the candidates for replacement.”

TITANIUM AND CHROME
ConforMIS parts are titanium on the tibia and highly polished cobalt chrome on the femur with polyethelene in between. The first-generation knees were too tight with not enough bone cut, said Rossario, who is now using the second-generation knee.

One of Rossario’s favorite patients, Henry Szmyt, a 74-year-old engineer, had both knees replaced due to rheumatoid arthritis. He had the surgeries done three days apart, then did six weeks of rehabilitation. Admitting that, yes, there was some pain involved, Szmyt said people whose daily functions are compromised like his were, need to check out the cutting-edge procedure. Szmyt was able to return to work at his manufacturing plant following rehabilitation.

The ConforMIS iTotal customized knee replacement procedure is no longer an experimental one, having been approved by the Food and Drug Administration in 2011. Since then, 50,000 patients have been treated with this technology, according to Elizabeth Best, vice president of corporate communications and engagement marketing at ConforMIS. She added that the implants are covered by Medicare and major insurers.

Although the price of the implants is costlier than an off-the-shelf knee replacement, related costs are lessened, leaving the insurer and patient with basically the same payout for each. Of course, patients should always check with their insurance companies before choosing a surgical procedure.

Rossario does 350-400 knee replacements a year, with a greater increase of patients during the winter season, when he might do eight to 10 per week. In his downtime, he hunts and plays guitar with The Showcase, a local band that plays once a month at Sailor’s Return in Stuart.

According to Rossario, ConforMIS plans to have a hip replacement out this year and after that is perfected, will work on a shoulder joint replacement.

Bogged down by rheumatoid arthritis and hobbled by knees that were no longer functioning, Henry Szmyt knew he had to take drastic action when a walker became his daily companion. An engineer with several demanding businesses, as well as a busy life, Szmyt started researching his health problems on the internet.

“I had pretty severe RA,” Szmyt said, “and my doctors had no solution except a referral for knee replacement surgery. The RA pretty much destroyed both knees. They were not just bone-on-bone; they were bone-in-bone. I am 74 now. This disease began about two years ago. I discovered that ages 72-75 is the window for attack by this form of RA.”

The owner of several companies, including a small manufacturing company in Port St. Lucie that produces hitches for RVs, Szmyt is used to spending long days at his plant as there are few employees. No matter how much it hurt, he had to get up and go to work. Painfully, he hobbled around the plant with the aid of a walker, swollen knees buckled out to the side.

He began to look into the prospect of surgery, but everyone was doing the off-the-shelf knee replacements and he was not interested.

“I am an engineer,” Szmyt said, “so I studied up on this. Then I saw this video on TV. I was going to go where I could to find this surgery.”

Further research brought him to the ConforMIS website where looking at this mathematical approach to knee replacement, he said to himself, “This is for me.”

He was willing to travel anywhere to get this type of knee replacement. Thinking he might have to travel to New England where the company is based, Szmyt was amazed to discover that there was an orthopedic surgeon on the Treasure Coast who was using this advanced procedure. He contacted Coastal Orthopaedics & Sports Medicine in Port St. Lucie for an evaluation. At his first appointment, Szmyt met with Dr. Edward Rossario’s assistant, Steve Sanders, who took the pictures then looked at them and said succinctly, “Two knees are bad. You need them both replaced.”

Szymt laughed as he recalled the visit. Even though he knew his knees were in bad shape, he was a bit stunned by Sanders’ short and to the point statement.

What interested Szmyt was that the ConforMIS knees would be customized for his body structure. “The replacement parts are different for each knee,” Szmyt said, showing off his badges of honor (the incision down the front of each knee). With mathematical precision, the parts are created from the measurements on the CT scan of each knee, something an engineer could admire.

“Each of my knees needed different-sized parts,” he said, “and they work very well,” as he got up to demonstrate that he can easily do squats with his new knees.

The frustrating part was waiting to schedule the surgeries. Medicine he was taking for his RA hindered his candidacy for surgery. “They had to wean me off the medication before the surgery could be scheduled,” he said. It took quite a bit of time, making Szmyt impatient.

“Once the two surgeries were done, I was back to work. I never stopped,” he said. “I just hobbled around with my walker and did six weeks of therapy. If anything, that is most important. I want to caution people: It is important to cooperate with these people (physical therapists). That is how you heal faster.”

After taking the time to recuperate fully, he still does exercises and maintains the 140-degree arc of movement he has with these new knees. It makes him feel like a younger man, he said. During the years he was able to move only with the help of a walker or an electric cart, the muscles in his legs had weakened and atrophied. Following the surgeries, having one replacement surgery followed three days later by the second surgery, he had to work hard to rebuild those muscles and his strength so he could stay on his feet for most of each day at the factory.

Having the goal of getting up and back to work might have helped Szmyt recover more quickly. But, again, he warns those facing the surgery not to fight against the therapy, but to accept it as it is the best and quickest way to complete recovery.