If the walls could talk 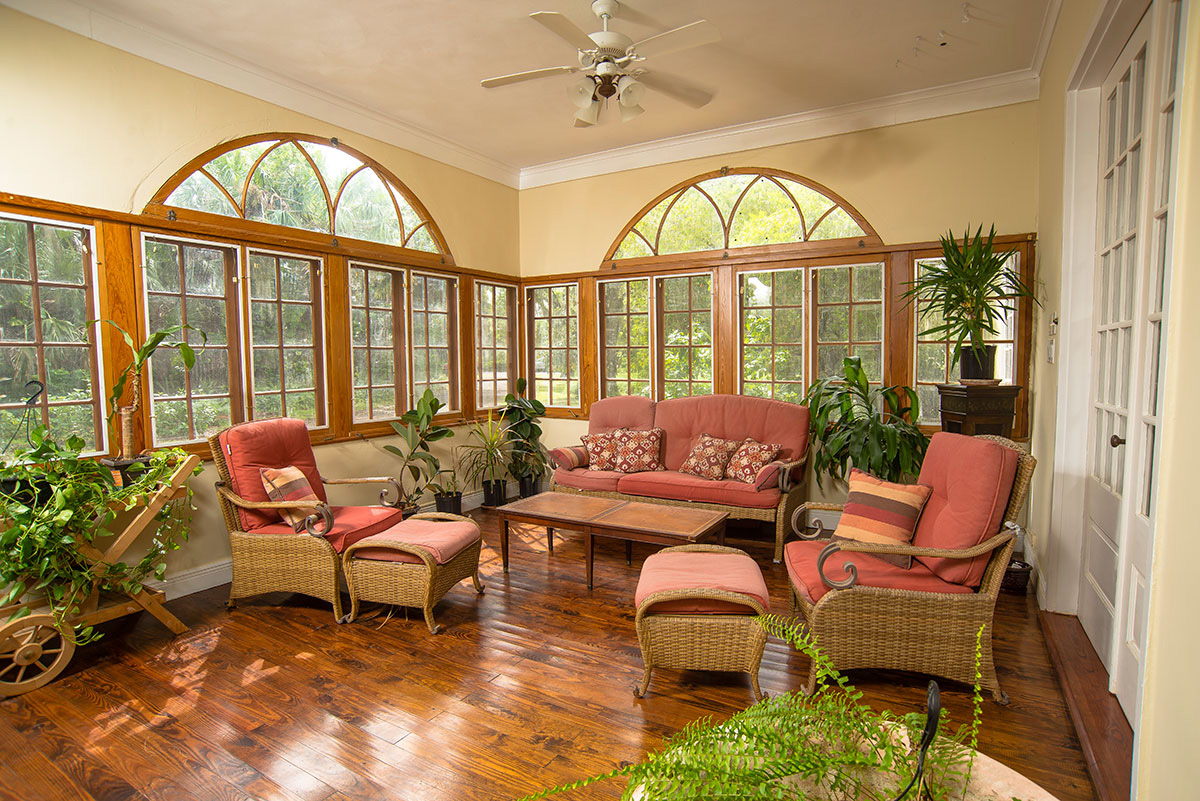 The Garden Room at the Crescent Moon estate is large, open and airy with custom-arched windows for views of the lush landscaping. PHOTOS BY ROB DOWNEY

Known today as Crescent Moon, the 95-year-old estate in western Vero Beach has been the location of secret liaisons during Prohibition and a fictional tryst between an American journalist and a Nicaraguan Sandinista rebel portrayed in a Hollywood movie.

The 4.2-acre estate has a legendary – yet largely undocumented – past and was added in 1997 to the National Registry of Historic Places. Built in 1922 by New York couple Theodore and Blanche Hausmann on the then 15-acre parcel, the home was “used as a winter residence and an informal nightclub, or ‘speak easy,’ ’’ according to the historical significance cited in support of it being named to the registry.

“The extent to which the residence served as a nightclub remains unclear,” according to the declaration. “Bernice Meyer, a local informant who lived across the street from the property during the 1920s, recalls the property used as a nightclub with patrons visiting the site during the evenings. Repeatedly admonished by her parents not to venture onto the property because of the illicit activities there, she recalls few specific details about the operation of the nightclub. Consequently, little is known of the character of the visitors, whether they were friends of the Hausmanns, or if the club was generally accessible to residents of Vero Beach.

“The Hausmanns, to help insure the protection of their personal property included in the legal documents a contents list of the house,” the declaration continued. “The dining room, library, living room, mistress bedroom, master bedroom, guest bedroom, pantry and kitchen were carefully inventoried. Although on the surface many items appear to be the possessions of wealthy seasonal visitors bent on indulging their desires, a closer review of the inventory reveals details that indicate the dwelling probably served as more than a private residence. Personal property amounted to some $20,000, which aside from the typical beds, linens, dressing tables, floor lamps and davenports, included 50 chairs, 40 folding tables, an assortment of mahogany and walnut tables, buffets, and serving tables, and a $300 generator. During the period, electric lines did not extend from Vero Beach’s electric plant to the unincorporated areas of Indian River County. 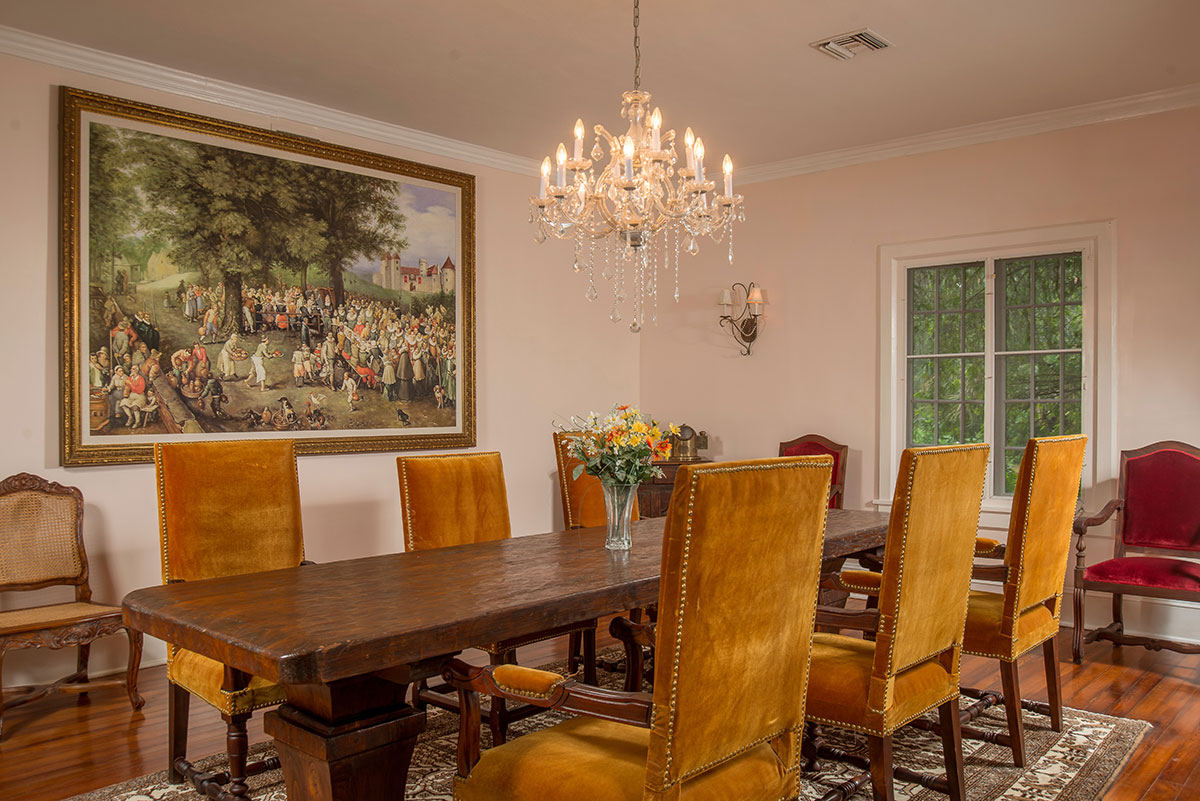 The chairs and tables in the formal dining room are replications of furniture found in the castle seen in the painting.

Interestingly, the kitchen inventory helps corroborate Meyer’s testimony about the property used as a nightclub, for it includes 60 dinner plates, dessert glasses, and assorted whiskey and cocktail glasses.

NO ARRESTS REPORTED
“A similar review of jail docket books in the Indian River County Sheriff’s Office reveals no arrests of the property owners or lessees. The use of the building facility as a nightclub apparently remained discreet during the 1920s, or was conveniently overlooked by local authorities.”

Isabelle Beuttell Dayton, 76, the oldest of nine children to grow up on the property, said she and her siblings heard from adults that its previous name was Paradise Inn, but they always called it The Big House. The siblings, their children and many great-grandchildren often visited the estate before it was sold in 2001.

Dayton said there were stories about roulette wheels in the gathering room. It was a “road house. Liquor bottles were found in a wall during remodeling,” she said. When she first lived in the house as a child, a man walked up and asked for a drink. “I wish now we had asked him in for a drink to ask him some questions.”

Some longtime residents remember stories about the house being used for gambling, but they don’t believe the myths and rumor that it was a house of ill-repute. They confirm stories of people buying liquor there and secretly going there to drink and enjoy themselves.

The truth will likely never be known.

PROPERTY CHANGED OWNERS
In 1928, Fort Pierce Bank foreclosed on the property and it was vacant until Dr. T. Chiffenden bought it in 1931 and built the above-ground swimming pool that is recognized under architectural significance as “an unique structure and one of the oldest examples of its type in Indian River County, (it) retains its architectural integrity to a high degree. Raised high above the surrounding grade, it has unusual presence compounded by a formal entrance loggia that includes changing rooms.” According to the declaration, Chiffenden discontinued its use as a nightclub.

Wealthy Illinois Realtor Helen Pollock bought and kept the property as her residence until she sold it in 1946 to Gerard Tameling Jr., a broker specializing in sugar industries and trading. Among other inherited business ventures, he would open a realty company in Vero Beach. 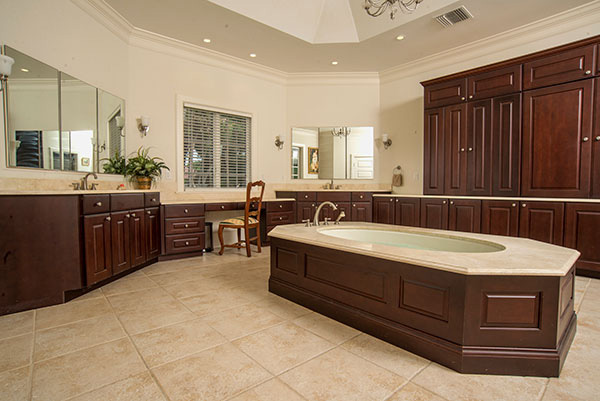 The addition of a large master bathroom provided room for a whirlpool bathtub and two vanities.

Dayton’s parents, Richard and Isabelle Buettell, bought the property in 1951 and lived there for 50 years until selling off all but a small parcel east of the original estate. Today, a wall separates two sides of the property from a single-family development that was built to the north and west atop former orange groves.

“The house is among the largest and best preserved examples of Mediterranean Revival style in Indian River County...,” the declaration says. “The house retains a high degree of original architectural integrity. An unusual contributing swimming pool possessing special architectural merit and a citrus grove add unique charm and ambiance to the property,” the declaration concluded.

Dayton’s brother George Beuttell, 72, grew up when State Road 60 was two lanes and the neighborhood was citrus trees and few houses. The largest rattlesnake ever killed in Indian River County was found in the north groves, Beuttell said, adding that family and friends rode horses and hunted dove on the property. “My father once pointed and said, ‘Look at that tree. It produces 40 boxes of grapefruit.’ ”

NUMEROUS SCENES FILMED
The tropical vegetation, main house and pool was deemed suitable to substitute for a mountainside hacienda in Nicaragua in the 1983 film Last Plane Out, starring Jan-Michael Vincent. Filmed locally in 1982 at Vero Beach Airport and at the Beuttell property, numerous scenes were shot around the estate.

Beuttell said family members were not allowed on the sets during filming. But they did have lunch with director David Nelson, son of Ozzie and Harriet Nelson, the 1950s TV sitcom stars. Vincent rarely came out of the trailer parked on the property, Beuttell said. His sister recalls crew members left the doors open while they were filming and rats came inside.

Aside from the main house, there are two other historical structures tucked into the lush landscape. The former bomb shelter from the 1950s was converted into an apartment and a one-room efficiency. Behind the pool is the carriage house with a two-story guest house attached to a three-car garage, converted from horse stables. It was always a guest house for family and friends. On the opposite side of the property, the tennis court has been gone for years, but the light still shines on the grassy yard where it once stood.

Typical of the Spanish influence of the period, the spacious home has casement windows, French doors, high ceilings, large interior spaces and arched doorways. Dade County pine flooring can be found throughout the original sections of the house.

After the Buettells sold the property, the new owners added a study and master bathroom at the end of the home. When the property was purchased two years ago, $400,000 was put into upgrades and renovations. The kitchen was completely remodeled with new cabinets, flooring, granite countertops and appliances. The master bath was also remodeled entirely with the addition of a whirlpool tub. A screened enclosure was added to the porch. Today, the home is 6,517 square feet with 5,234 under air conditioning.

Hector Jimenez lives at Crescent Moon and is the general manager of Aero Shade Technologies, owner of the property. “I work in a factory all day and this location is very quiet,”

Jimenez said. “It is paradise during the day and night. It is very enjoyable here and I like to watch the birds that come and visit.”

For 95 years, this house has seen people come and go. If only the walls could tell tales.

Crescent Moon is listed for sale by Vance Brinkerhoff with Coldwell Banker Paradise for $1.295 million.