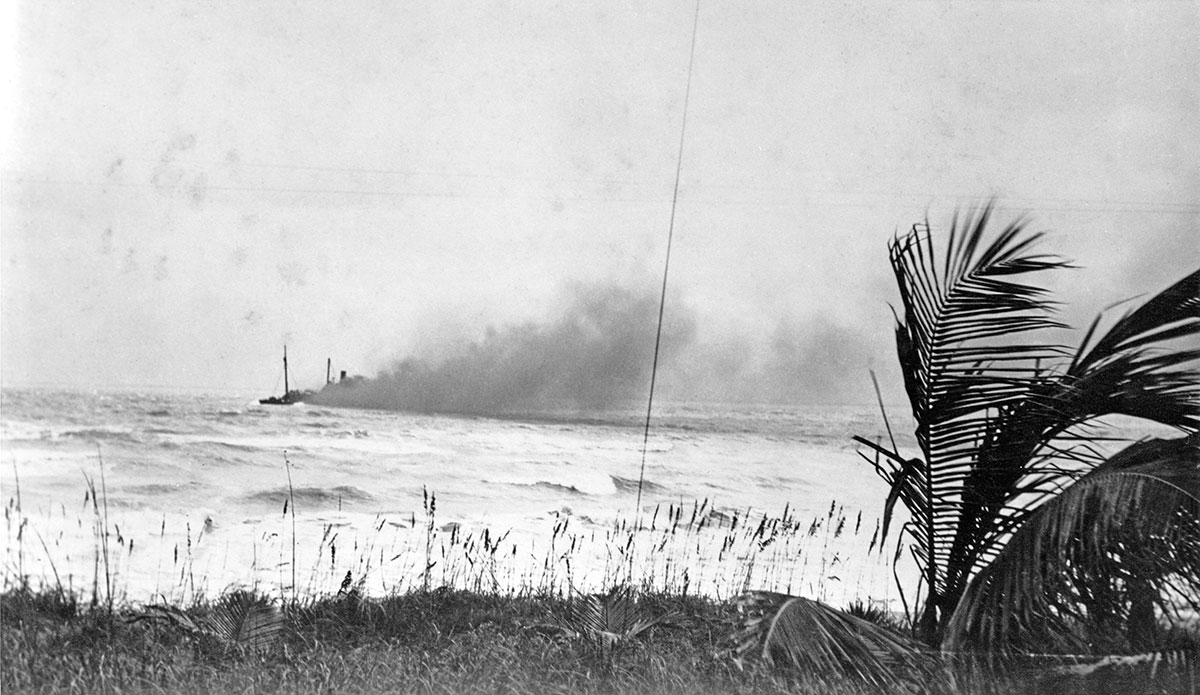 When World War II brought German U-boats to the East Coast, ships were suddenly imperiled and often ablaze just offshore from both accidents and attacks. This photo taken from Hobe Sound in 1942 shows a ship that had been damaged in an accident at Jupiter Inlet. State Archives and Library of Florida

“Came to attack course of 60 degrees … have the steamer now lying at 0 degrees against the bright horizon at dusk ... Steamer zigzags to course 310 degrees … range now about 3000 meters … steamer has now turned and lies again bow left, therefore switched to a stern shot.”

The horrid explosion shook the Treasure Coast and took the lives of 35 sailors. Another ship, the Walter Jennings, reported the explosion and fire offshore but said it couldn’t assist or it would risk being the next victim.

World War II was at the country’s doorsteps with the arrival of German U-boats, which in 1942 found easy prey in the ships that plied the coast. This was so early in the war that Florida wasn’t bustling yet with soldiers and sailors; it was before blackout restrictions were enforced and before rationing was enacted.

Despite the creation of nearby Murphy Field, where the Southern Signal Corps School would open in June 1942, and the Fort Pierce Naval Amphibious Training Base, the war had been easy to dismiss until then. Unless someone’s son enlisted, the news was from the Pacific or Europe, not these quiet coastal towns.

MANY SIGHTINGS NOTED
But at least one German U-boat had been lurking offshore for several days. The Anderson had reported sighting a periscope earlier on the day it was attacked. Likewise, an Eastern Airlines plane saw a submarine between two freighters 7-10 miles off Fort Pierce at 3 p.m. and reported it to the Eastern Sea Frontier, the Navy command center for the East Coast.

The command center’s diary for early 1942 is peppered with submarine sightings and reports of ships ablaze at sea, but there was little that could be done because the Navy and Coast Guard lacked defensive capabilities to protect the vast coastline against the stealthy invaders.

The Germans ultimately wanted to cripple American shipping in order to topple Great Britain, and they came close to achieving that goal. In the first four months of 1942, the U-boats were deadly effective, sinking 173 ships on the East Coast and sending hundreds of merchant mariners to their deaths. That was the case on Feb. 22 when the W.D. Anderson was enroute from Corpus Christi, Texas, to Philadelphia with a full load of crude oil.

Local residents are unlikely to know the name of Hans-Georg Friederich “Fritz” Poske, the commander of German U-boat U-504, but his legend lives on in the wrecks he left along the Florida coastline. Poske recorded his observations when hunting down the W.D. Anderson, which was desperately trying to evade the U-boat by zigzagging along the coast.

“After 45 seconds hit center, with an immediate violent detonation of the gasoline cargo,” Poske wrote. “In seconds the ship is broken and in flames from forward to astern. After 12 seconds a second explosion in the stern that breaks off. The disappearance of the particular parts is not distinguished in the flaming sea.”

ONLY ONE SURVIVOR
Aboard the ship was 23-year-old Frank Leonard Terry, a Pennsylvanian whose job was wiper; he was alone on the fantail when it exploded. He jumped into the water as flaming oil spread from the wreckage. None of his fellow crewmen escaped the flaming wreckage, and all of them died. A fishing boat found Terry and brought him to the Coast Guard in Stuart.

The day before, Poske had sunk the Republic, another tanker ship, much closer to shore. He described the attack in his log: “The speed was carefully matched, the steamer runs … quite close under land. Medium visibility otherwise somewhat hazy and bright moonlight. Shot from tube III and IV. After 150 seconds, two detonations, hit under the bridge and aft of the engine room, where sparks were flying in the air. When the steamer is seen again the stern is already under water. He settles quickly by the stern.”

In that attack, three members of the crew were killed instantly, two drowned and 23 others got to shore safely, most landing on nearby Jupiter Island where they were welcomed at the beach house of Mrs. Worthington Scranton (others were picked up by a passing ship and taken to Port Everglades).

A colorful account of the sailors shucking off oil-soaked dungarees and donning donated clothing like silk robes and Scottish tweed jackets was written by a local newspaperman, Ernest Lyons, 50 years after the event. Lyons said government censors wouldn’t allow newspapers to publish information about U-boat attacks in 1942, so the story remained local lore for decades.

As Lyons remembered it, residents of Jupiter Island and Hobe Sound gathered to offer what they could to the shipwrecked sailors, including whiskey and caviar. Safe and warm in clean duds, they relaxed and began to enjoy themselves in the beach house until their captain burst in and put an angry end to the revels. The men stepped back into their soiled shipboard clothing and left on Navy trucks within a few hours.

In his 1992 article, Lyons asserts that a third torpedo missed the Republic and exploded on the reef, shaking him out of bed. That was repeated by Josh Liller, historian at Loxahatchee River Historical Society at Jupiter Lighthouse. “Pretty much everyone of any age who lived between Stuart and Jupiter at the time recalls being shaken out of bed from the attack, the cause being attributed not to the ship exploding but because a torpedo missed the ship and exploded against the offshore reef, causing a small earthquake.”

But Poske’s log does not reflect that another torpedo was fired. In fact, U-boats rarely spent three of the precious shells on a ship, often relying on deck guns to open holes at the waterline if two torpedoes didn’t sink the target.

CAUTIOUS COMMANDER
Poske was in fact rather restrained compared to other U-boat commanders. He’d arrived near Jupiter Inlet on Feb. 19 but didn’t fire on a ship until he sighted the Republic two days later. “I intend to spend the entire day submerged to observe traffic and in so doing run to the south about the level of Jupiter because there is deep water close under the coast and traffic is forced into a narrow strip,” he wrote on Feb. 21. He was clearly nervous about aircraft finding his U-boat in the shallow water, as he described the conditions, water clarity, phosphorescence, and shoreline extensively as he watched potential targets sail past.

Other U-boat commanders were far more daring: Harro Schacht and his U-507 ventured into the mouth of the Mississippi River in early May 1942, contending with shallow water and turbulent currents as well as frequently dodging patrol boats.

And a memorable attack took place within sight of hundreds at the Jacksonville Beach Resort when U-123 under Reinhard Hardegen torpedoed the Gulfamerica on April 21, 1942, causing a fiery explosion. He sailed the U-boat between the burning ship and the onlookers ashore to administer the coup de grâce with his deck guns, silhouetting the menacing submarine against the flames. In all, U-boats sank some 46 ships around Florida and Cuba in 1942-43, but the many airfields and improvements in sub hunting technologies turned the tide against the Germans by late 1942.

Indeed, Poske might have done much more damage along the Treasure Coast if he had desired. His log reflects many ships that passed without pursuit, “tasty morsels” he called them. And there was one — somewhere near the Jupiter Inlet — which he mentions in his log on Feb. 22, just after his successful attack on the Republic and before he blew up the Anderson.

The moon had set, Poske noted, so he tried to moderate the U-boat’s speed to reduce phosphorescence that might give him away. He fired two torpedoes, reporting that detonations were heard when they found their mark. He estimated the ship to be large, a 10,846 GRT steamer, and reported it had stopped in the water after the torpedoes hit. Then something strange happened: when Poske brought U-504 close to where he had seen the ship, he couldn’t find it.

“Nothing more is seen of the steamer!” he wrote in his log. “It is impossible with the good visibility conditions for that he ran off so suddenly, instead it is certain that our up to the neck fully loaded freighter … sank like a stone in a short time. Wreckage is not distinguished in the complete darkness. Under these circumstances I can report the sinking as observed.”

At the end of the war, Poske was fortunate to be one of the few U-boat commanders still alive, as his comrades had a 25 percent chance of surviving the improved detection capabilities of Allied bombers by 1943, when more than 250 U-boats were sunk. He may also be fortunate that nobody looked too closely at his war diary, because there is no record of this phantom ship being torpedoed and sinking near Jupiter Inlet on Feb. 22, 1942.

Alison O’Leary co-authored So Close to Home: A True Story of an American Family’s Fight for Survival During WWII with Michael J. Tougias (Pegasus Books, 2016). www.alisonoleary.com