How we became the Treasure Coast

Long known for our world-famous citrus, St. Lucie, Martin and Indian River counties became known as the Treasure Coast after the discovery of riches off our shores in the 1960s

There was a time when our three counties had no special name other than, perhaps, Indian Riverland. St. Lucie, Martin and Indian River counties were defined by their principal towns, which also served as their county seats – Fort Pierce, Stuart and Vero Beach. There were no other towns of any consequence in the region. Fort Pierce, Stuart and Vero were distinct, mostly self-contained communities linked mainly by U.S. 1 and high school football rivalries. Vast amounts of undeveloped land lay between each city, and since the turnpike and I-95 were still on the drawing board, there wasn’t much commuting. The only region residents considered themselves to be part of was South Florida for those in Martin County and east central Florida for those in Indian River County. Fort Pierce, a retail hub that attracted shoppers from Vero, was betwixt and between. Port St. Lucie, now the most populous community in the region, had barely a subdivision or two in the early 1960s.

It had been rumored for years that there was sunken treasure off our coast, and occasionally, you’d hear of a beachcomber finding a gold coin or two after a storm. Then, in the 1960s and 70s, organized and well-equipped treasure salvors started finding huge amounts of gold and silver that they brought up from the wrecks of a fleet of Spanish galleons that sank in a hurricane in 1715. It began with Kip Wagner’s Real 8 Company and Mel Fisher’s Treasure Salvors enterprise. A gold rush was on, and the sleepy communities of Vero, Sebastian, Fort Pierce and Stuart were transformed. It wasn’t long before folks started calling the region the Treasure Coast. 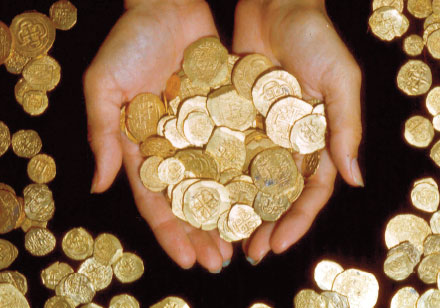 These are some of the doubloons recovered from the 1715 Plate Fleet recovered off the shores of the Treasure Coast. PHOTO PROVIDED BY MEL FISHER TREASURE MUSEUM