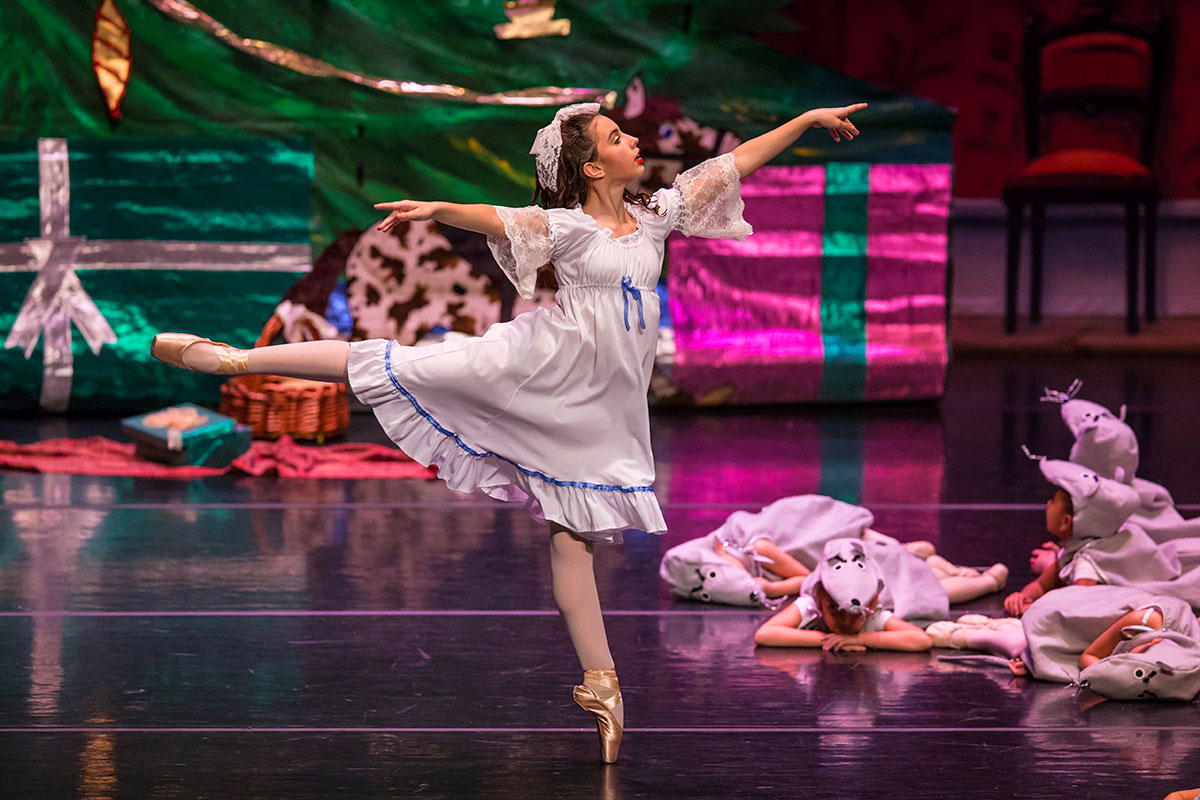 Alicia Frazier dances the role of Clara for Vero Classical Ballet, dancing with the mice in the first act.

Ballet troupes bring The Nutcracker to life along the Treasure Coast

Remembering childhood dreams of sugar plum fairies or dreaming up a new holiday tradition to treasure, The Nutcracker, with the familiar score by Pyotr Ilyich Tchaikovsky, very likely is on the list. For generations of kids and former kids, it wouldn’t be Christmas without at least one performance of that magical ballet. On the Treasure Coast, there’s no shortage of performances, all telling in dance the well-known story that began with The Nutcracker and the Mouse King by Prussian writer E.T.A. Hoffmann. It’s taken many forms through the centuries.

ST. LUCIE BALLET/TREASURE COAST YOUTH BALLET
The ballet, as we know it, didn’t become a staple in holiday celebrations until 50 years ago, according to Lydia Oquendo Corrales who, with her husband, Rogelio, directs the St. Lucie Ballet in Port St. Lucie. “It’s performed by almost all the major American ballet companies and has become a tradition in most major cities.”

This is season 12 for its Nutcracker. From the outset, ballet was an inevitable choice. “It is the most popular ballet,” Corrales said. “The music is famous and the characters are well-known by children everywhere.”

The St. Lucie Ballet School’s production of The Nutcracker is presented by its performance company, Treasure Coast Youth Ballet, a nonprofit sister organization that raises funds for scholarships and facilitates community outreach.

Dancers, who can be as young as 3, audition for the many fun roles in the production. They come from the Treasure Coast and Okeechobee for the chance to be part of the tradition. They’ll share the stage with almost a half-dozen professionals from Sarasota Ballet, Ballet Palm Beach and Minnesota Ballet in four December performances.

It isn’t all about performance at St. Lucie Ballet, however. “Students get a history lesson by learning original choreography by ballet masters from the past such as Lev Ivanov, Arthur Saint-Leon, Marius Petipa, and others,” Corrales said. “This kind of education is very special and St. Lucie Ballet takes pride in being able to pass on the 400-year-old tradition of ballet to its students. It is very important for the classical ballet dancer to know of its history, dances, and music. Some dancers might go on to perform in a major ballet company someday and must be familiar with this ballet.”

St. Lucie Ballet is a seriously ballet-based school in Port St. Lucie, Corrales said. “All styles of dance have good ballet training as their base. A great dancer must also be trained in most styles of dance, as well.”

FLORIDA ARTS & DANCE CO.
For three performances at the Lyric Theatre in Stuart, Florida Arts & Dance Co.’s Nutcracker is traditional, with its lively activity, bright lights and energetic music. There’s one special performance, however, geared toward an audience that would prefer a less boisterous production. Joann Gallagher, president of FADC, said the company is trying something new this year by offering The Gentle Nutcracker, a sensory sensitive performance on Dec. 10 at the Lyric. This shortened performance of 75 minutes will feature subdued lighting and sound. Guest artists from Russian Ballet Orlando will not participate in this performance.

This is the 21st year of The Nutcracker for FADC. “The show is a hometown favorite and a tradition for residents across the Treasure Coast and appeals to audiences of all ages,” Gallagher said. Being a tradition doesn’t make the performance the same every year. The FADC instructors mix it up a little with variations on some of the elements, Gallagher explained. That includes choreography, scenes and props “to keep the performance fun and exciting for the audience and performers,” she said.

Performers range in age from 4 to over 50. In addition to FADC dancers and instructors, the cast includes families of students and volunteers.

“Many people come together to bring this show to life, so you will see families dancing together on stage and may not even realize it,” Gallagher said. “Some of the FADC students have been performing in The Nutcracker for 10 or more years, starting as baby mice and cupcakes!”

Florida Arts & Dance Co. is a teaching company that offers classes in everything from ballet, to hip hop to Irish step, believing that everyone who wants to dance should have that opportunity.

VERO CLASSICAL BALLET
Even when a production of The Nutcracker is considered traditional, there’s room for interpretation.

This is the 10th anniversary of VCB’s Nutcracker. “We love the libretto and score and love the fact that so many children can be incorporated into the production,” Trammell said. “Everyone auditions for the many roles and everyone who auditions gets a part.”

With the exception of two professional dancers from Orlando, all the roles will be filled with local performers from 4 to 77 years of age.

Trammell is thrilled to have the Vero Beach High School Orchestra, with the addition of 10 professional musicians, playing Tchaikovsky’s classic score. Matthew Stott will conduct the orchestra, playing from the Performing Arts Center’s orchestra pit.

Vero Classical Ballet is a performing and teaching company, with classes held at Leisure Square in Vero Beach. Trammell’s wife, Amy, teaches Ballet Magnifique, a class for special-needs students. “We believe every child deserves the chance to dance,” he said.

When it comes to traditions, it’s the personal touches that make them our own. And just like other Christmas traditions, The Nutcracker takes on the personalities of the presenters, and they are plentiful on the Treasure Coast.

BALLET VERO BEACH
When you simply cannot fit one more vision of dancing sugar plums into your head, picture instead manatees and dolphins twirling and pliéing in Ballet Vero Beach’s innovative The Nutcracker on the Indian River.

The story behind the ballet remains the same in Ballet Vero Beach’s version — sort of. Adam Schnell, artistic director and CEO of the region’s only professional ballet company, thinks outside the jack-in-the-box when it comes to The Nutcracker.

“I am pretty sure there has never been a version where the second act is set in Florida,” he said. “Our production uses the Tchaikovsky score and the classical ballet idiom to tell a unique version of the classic tale. Nutcracker on the Indian River moves the action of the story to 1919, the year Vero Beach was chartered. Rather than a candy palace, our heroine journeys from New York to Florida and is entertained by all manner of local flora and fauna.”

While the story, based on Hoffmann’s long-ago fairy tale, has been tweaked and modified through the two centuries since it was written, it wasn’t always successfully presented.

“The original ballet from Russia borrows very loosely from that source material and was a total flop on its premiere,” Schnell said.

Schnell believes The Nutcracker’s staging is open to interpretation.

“There is no one librettist for what I would call either the traditional ballet or any modern version,” he said. “At this point (even myself) all choreographers tend to borrow some from the source material and also other versions of the ballet that exist. How original any choreography is at this point is anyone’s guess.”

This partnership of Ballet Vero Beach and The Indian River Land Trust will spotlight the delicate balance required to keep the Indian River thriving. Walk-through exhibits will be installed at the theater for the two performances.

“So many people in our community are not even aware of the peril our environment is in, let alone what the Land Trust is doing to preserve and protect it,” Schnell said.

Schnell and the Land Trust took it up a notch when it decided to give the students involved in the production a deeper look into the relevance of this Nutcracker by taking them where the action is — the Indian River Lagoon.

“We thought it was super important to get the kids out into the nature that our production is trying to protect,” Schnell said. “Getting the kids out on the lagoon exposes them to the beauty that surrounds us and helps them understand why we chose to set our Nutcracker on the lagoon. It is all part and parcel with the fact that we believe a production like this has a tremendous amount of potential to inspire citizens toward environmental stewardship.”

SUNRISE THEATRE
Nine years ago, The State Ballet Theatre of Russia first brought its dazzling production of The Nutcracker to the Sunrise Theatre in Fort Pierce.

“The audiences have been delighted with this production over the years and appreciate seeing the difference in the dancers from Russia vs. seeing other local or national companies’ versions,” said theater executive director John Wilkes. “Audiences have been strong in numbers over the years and it continues to nearly sell out the Sunrise.” He said families enjoy the magical toys, falling snow, growing Christmas trees and world-class dancers, all from Russia.

The Sunrise Theatre adds two additional offerings for the holiday. It wouldn’t be the Christmas season without Charlie Brown, Snoopy, Lucy, Linus and the rest of the gang discovering what Christmas really means. This performance of A Charlie Brown Christmas is a fully staged adaptation of the animated video that’s on television every year.

For something a little different, the theatre is presenting a singing and dancing extravaganza of holiday sounds with Santa leading the parade. There are even high-kicking chorus girls and decades worth of familiar Christmas songs and carols. Wilkes calls Christmas Wonderland Holiday Spectacular pure holiday magic.

SOUTH FLORIDA DANCE CO.
Also at the Sunrise, a different take from a local dance company. Christmas stories aren’t all about nutcrackers. South Florida Dance Co., based in Port St. Lucie, brings another tradition, Charles Dickens’ A Christmas Carol to the Sunrise for two performances early in December.

Bonnie Spector, owner and executive director of the teaching and performing company, said it was six years ago that the idea of “an annual holiday tradition to share with our dance families and our community” took shape. The cast, with the exception of Scrooge, is made up of students at the school, all between 7 and 18. Scrooge is portrayed by an instructor.

To dress the dancers, Spector said, they have to pull from several sources. “The costumes are a compilation of costumes gathered over years from other performances, ordered from costume companies, and custom made costumes from some of our parent volunteers.”

Scrooge’s famous line, “Bah. Humbug,” is overshadowed by what Spector described as “a beautiful lesson for both young and old that brings to our remembrance what is really important during the holiday season and in life.”