Hallstrom Home for the Holidays

Like the Festival of Trees at Riverside Theatre and the Christmas parade on Ocean Drive, the St. Lucia Swedish Christmas Festival at the Hallstrom House has become a familiar harbinger of the holidays in Indian River County.

The Swedish festival, named for an early Christian who was martyred in Rome in A.D. 304, will take place Dec. 8 in the distinctive brick house on Old Dixie Highway built by Swedish immigrant Axel Hallstrom in 1918. Admission is free, but guests are asked to bring a food item that will be donated to a local food bank.

The house will be decked out in Christmas finery, with each of the nine rooms displaying a tree trimmed with Swedish flags and ornaments and, hopefully, a Florida sand pine on the front porch to signify Hallstrom’s pioneer roots. Swedish treats and refreshments will be served.

The procession led by a local girl in the role of St. Lucia always ranks as the afternoon’s highlight. The girl will wear a white robe, red sash and headdress with six candles, and she’ll be followed down the staircase by several other similarly attired girls. The candles represent the traditional Swedish symbol of bringing light to the longest night of the year.

The St. Lucia tradition was centuries in the making in Sweden. Monks who introduced Christianity to the Scandinavian country told stories about a young girl, Lucia of Syracuse, in Sicily, who was killed for her faith while aiding Christians in Rome in the fourth century. The first St. Lucia feast day in Sweden is believed to have taken place in 1764.

“The most common story told about St. Lucia is that she would secretly bring food to the persecuted Christians in Rome, who lived in hiding in the catacombs under the city,” Agneta Lilja wrote on the Swedish Institute website. “She would wear candles on her head so she had both her hands free to carry things.”

Al Smith, volunteer coordinator for the Indian River County Historical Society, which owns the Hallstrom House, said in many Swedish families, the oldest daughter takes the role of St. Lucia on Christmas morning and while wearing the candles on her head, serves breakfast to her parents in bed.

In Sweden, a pagan festival of lights had been celebrated on the winter solstice, Dec. 13 on the old Roman calendar, which is the day with the least amount of sunlight. The date later was observed as a Christian feast day in honor of St. Lucia.

“Here at the Hallstrom House, we always celebrate St. Lucia Day on the Sunday closest to Dec. 13,” Smith said. 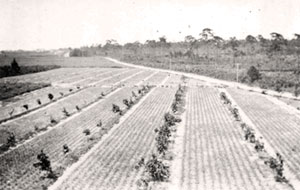 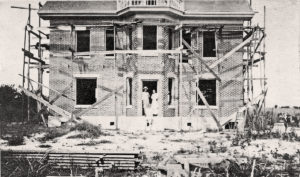 Axel Hallstrom used brick from Georgia to build the house. He and his daughter, Ruth, and his sister, Johanna, who had come from Chicago to take care of Ruth when Axel’s wife died, moved into it in 1918 and lived there for the rest of their lives. INDIAN RIVER COUNTY HISTORICAL SOCIETY 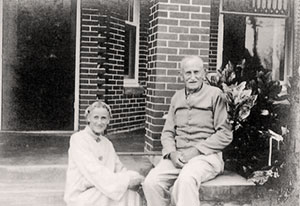 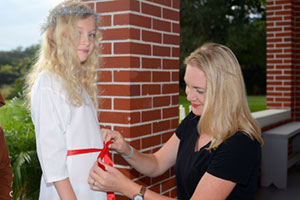 The Hallstrom House stands as a memorial to a resourceful and hard-working pioneer family. Hallstrom, the youngest of 10 children, had only a sixth-grade education when he dropped out of school and went to work on the family farm. He learned how to grow vegetables and flowers at a young age, Smith said.

After immigrating to the United States, he worked in Chicago and St. Paul, but then, a few years into the 20th century, he was drawn to Florida by the lure of opportunity. Henry Flagler had extended the Florida East Coast Railway down the peninsula, which enabled growers to ship produce to northern markets faster than by steamboat. In 1904, Hallstrom bought land in the Viking settlement near Indrio Road in St. Lucie County for a pineapple plantation. When his wife, Emely, died a few years later, he sold the land and moved north to the Oslo community of Norwegian settlers in what is now Indian River County. There, in 1908, he planted 40 acres of pineapples on the sandy Florida ridge 100 yards west of the railroad tracks. He later planted citrus, and he built the farmhouse, using bricks from Georgia and the help of local craftsmen, many of whom were, like him, Scandinavian immigrants. The house was completed in 1918.

Hallstrom, a past president of the Indian River Producers Association of Vero Beach and a director of the St. Lucie County Bank in Fort Pierce, lived in the house with his daughter, Ruth, until his death in 1966 at the age of 96. Ruth Hallstrom, who taught at a one-room school on Orchid Island for one year and later managed her father’s citrus business and served as his caregiver, lived in it until her death at 95 in 1999. She bequeathed the house and five acres to the historical society.
Axel Hallstrom seemingly kept records of every aspect of his life and businesses. When the historical society took over the house, members found — in nearly every room as well as the third floor attic — documents stacked up in file cabinets, hat boxes, packing boxes, bookcases and old-fashioned satchels, from typed bills and receipts to journals and handwritten letters. Smith saw an invoice from a Fort Pierce doctor to a Hallstrom relative that was dated in the late 1940s.

Some of the correspondence between Axel and Ruth Hallstrom and relatives in Sweden was written in Swedish, so the historical society has brought in a number of people who know the language to translate. Students from Indian River State College are converting the material to a digital format. Now, Smith is looking for more volunteer docents to give tours of the house so that it can be open more than three days a week (Wednesday, Thursday and Friday). He also hopes to find someone who knows “Old Swedish,” the language that grew out of a Norse dialect in the Middle Ages. Gradually, it was supplanted by the less complex “New Swedish,” but hundreds of years later, at the dawn of the 20th century, some of the Hallstroms’ relatives and associates still corresponded in “Old Swedish.”

Ruth Hallstrom was born in the United States in 1904. When her mother was dying four years later in St. Lucie County, Axel promised he would take the girl to Sweden to meet her relatives.

“They maintained a steady correspondence over the years,” Smith said. “The Swedish bond was very strong with Ruth.”

Ruth went to finishing school in Sweden after graduating from Fort Pierce High School in 1924. She would be delighted to see Swedish customs continue at the house her father built, Smith said.

“She was very much a traditionalist,” he said. “She liked the old ways.”