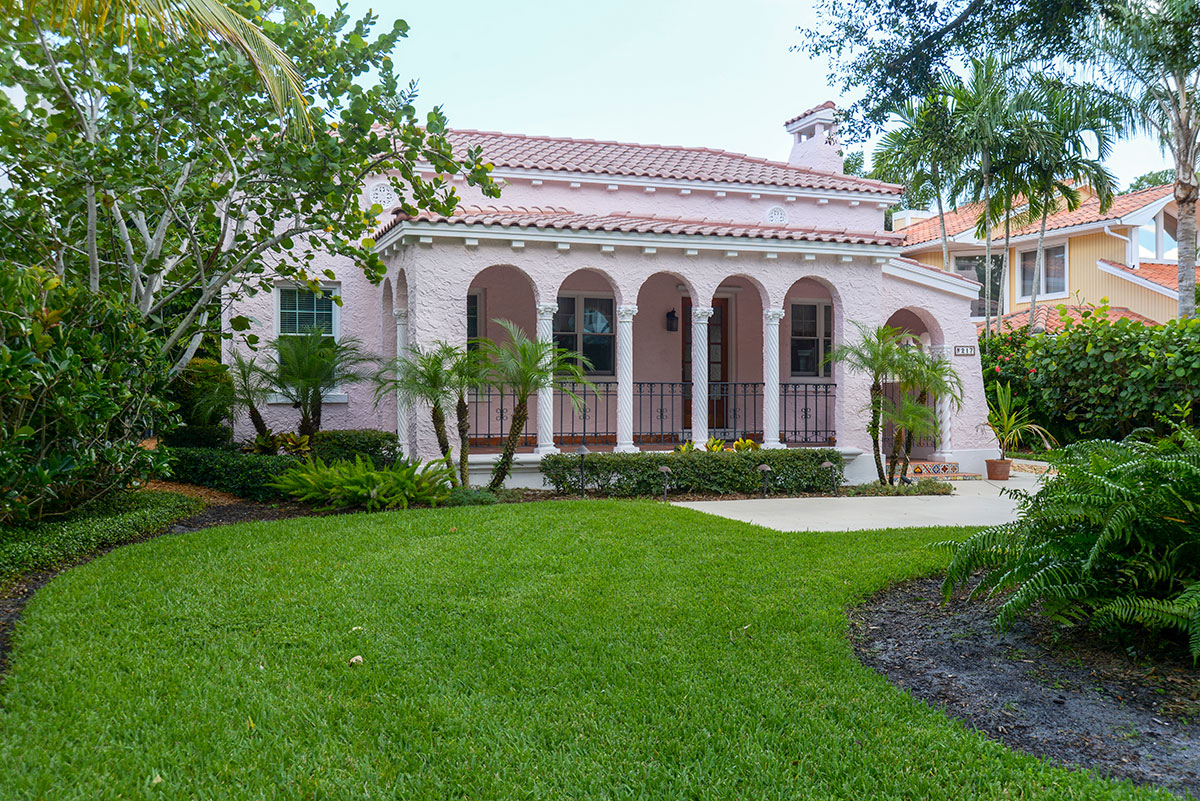 Mediterranean Revival was a popular architectural style in St. Lucie Estates and other coastal South Florida communities during the 1920s and 1930s. A number of these houses remain in the development today, including this example with its terra-cotta tile roof and elegant colonnade. ROB DOWNEY PHOTOS

The heart of one of Stuart’s earliest developments remains unbroken

Hundred-year-old mango trees shade the terracotta barrel-tile roofs of Mediterranean Revival houses. Coconut palms, waist-high ferns and Allamanda shrubs with their buttery yellow blossoms grow along trails that wind through the middle of the streets.

Welcome to St. Lucie Estates, one of Stuart’s earliest and most beautiful subdivisions. Its sandy acreage was once a pineapple plantation — and later mangos after competition from Cuba hurt the local pineapple industry. Before this property was subdivided, houses were a half-mile or more apart, and the only other structures were board-and-batten sheds.

We recently moved back to Don’s beloved childhood neighborhood after spending 20 years living in Auburn, Alabama, where I taught journalism at Auburn University and Don taught architecture at nearby Tuskegee University.

Before moving to Auburn, Don was one who spearheaded the revitalization efforts of downtown Stuart in the late 1980s. He also founded Stuart Heritage and the Stuart Heritage Museum, and as an architect did the first major renovation of the Lyric Theatre, which placed the building on the National Register of Historic Places.

Don’s family history coincides with the history of St. Lucie Estates and Martin County. Both his parents came to Stuart as children in 1925, the same year Martin County and St. Lucie Estates were formed. His father, Donald Armstrong Sr., moved here from Arkansas and that year Don’s mother, Frances Armstrong, arrived with her uncle, Edward Joseph Smith, who was raising her.

Smith came to Stuart to serve as Martin County’s first county judge, appointed by Gov. John Martin. The Smiths built two houses in St. Lucie Estates, and the one built in the 1920s still stands on 213 SE Alamanda Way.

After serving as an officer during World War II, Don Sr. studied architecture at the University of Florida on the GI Bill and returned to Stuart to establish Martin County’s main architecture firm.

“Home for me was the house I grew up in during the 1950s and 1960s,” my husband recalls, sitting in the living room of our St. Lucie Estates house, whose picture windows overlook the ancient mango trees he climbed as a child. “Our house sat in a lush jungle of mango, guava, cherry, orange and other fruit-bearing trees that grew wild on the property my father purchased right after World War II.”

“That explained the straight rows of equally spaced mango trees, and why everywhere I went I saw the same variety of plants,” Don says. “And it explained the dilapidated caretaker’s shack and old windmill that pumped water from the ground to irrigate.”

When the first sections of St. Lucie Estates were developed in 1925, this was the peak of Florida’s decade-long “land boom.” St. Lucie Estates was created that same year to appeal to the fantasies and aspirations of Northerners looking to enjoy the fruits of Roaring Twenties prosperity in a warm climate.

PINEAPPLES AND PIONEERS
By the 1890s, several of Stuart’s pioneer families were growing pineapples in the Stuart area. By 1894 a new wave of settlers arrived, thanks to the extension of Henry Flagler’s railroad to Stuart.

Among these newcomers were John and Katharine Dunscombe, who in 1907 purchased property and began growing pineapples on land that became St. Lucie Estates. Their son, Carroll Dunscombe, was just 23 when in 1922 he founded Florida Growers that cultivated 520 acres of pineapple fields.

Before Martin County was formed, Stuart had been part of Palm Beach County. Locals wanted their own county, so in 1924 a committee was formed to push for it, and in 1925 a bill was passed to create Martin County. On the committee were Carroll Dunscombe and others who had established St. Lucie Estates the same year.

The newly formed county gave the city of Stuart greater autonomy. As proof of their faith in the new county, Dunscombe and a few of his fellow committee members created a development corporation called St. Lucie Estates Inc. Between December 1924 and July 1925, the corporation platted the first four sections of St. Lucie Estates and built roads and other infrastructure.

Lots were sold exclusively through Lyons, Atkin & Innes of which Harry Lyons was a partner. Lyons was part of the campaign to create the new county and the father of Ernie Lyons, a notable author and editor of The Stuart News.

Also a member of St. Lucie Estates Inc. was landscape architect Gerald O’Reilly, who approved the building designs for the new subdivision and also served as Stuart’s city planner. O’Reilly was a partner in the noted Miami architectural firm Pfeiffer & O’Reilly, which had opened a Stuart branch office in 1925.

The development of St. Lucie Estates was part of a greater building and migration period in U.S. history, when millions of Americans moved to Florida during the 1920s. During that “flapper era,” people had money to travel and invest in real estate.

So, why not pack up your cares and move to the balmy Sunshine State?

Like similar boom-time subdivisions in Palm Beach, Coral Gables and other South Florida communities emerging at the time, St. Lucie Estates represented a tropical version of the City Beautiful movement, an early 20th century idea that advocated the beautification of American cities. Frederick Law Olmsted — best known for designing New York City’s Central Park — was a champion of the movement.

“After I became an architect like my father, I developed a newfound appreciation for the neighborhood I grew up in,” Don recalls. “Having been schooled in New Urbanism, which was influenced by the City Beautiful movement, made me see how St. Lucie Estates embodied the principles of these two movements.”

He identifies three tenets that contribute to its livability. First, St. Lucie Estates is based on a street grid with traditionally sized blocks that makes it easy to navigate from place to place. With the exception of Riverside Drive, which follows the winding bank of the St. Lucie River, there are few curving roads common in later suburbs.

Second, the landscape design enhanced walkability, created a strong sense of place and encouraged public interaction. The primary streets are boulevards with lushly landscaped medians that serve as linear parks with paths and benches.

Third, the designs of the early houses were shaped by a simple architectural code that created visual harmony, designs based on the revival styles popular in South Florida at the time St. Lucie Estates was created. Revivalism in architecture is the use of visual styles that mirror those of a previous era. 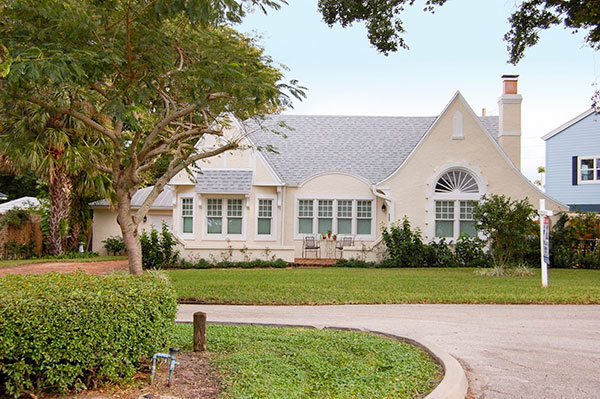 A smaller and simpler version of Tudor Revival is the storybook style, inspired by the English cottage. This stucco storybook house was likely designed by architect George L. Pfeiffer of Pfeiffer & O’Reilly, a Miami firm that opened a Stuart branch office in 1925 when St. Lucie Estates was first developed.

FANTASY ARCHITECTURE
Several revival styles were used in 1920s subdivisions. One that left its mark on St. Lucie Estates and other coastal South Florida communities is Mediterranean Revival-style architecture. Popularized by Palm Beach architect Addison Mizner, the style started in 1919 with his design for the Everglades Club in Palm Beach.

Mediterranean architecture’s predominant influences originated from Spain and Italy — an idealized aesthetic evoking exotic seaside villas for those who wished to escape the conventions and cold of the North and Midwest.

An early fanciful ad for St. Lucie Estates featured another house style that also reflected boomtime optimism. It appeared in the March 1926 issue of South Florida Developer, one of Stuart’s first newspapers. The ad depicts a Gatsby-like couple with a Tudor Revival-style house in the background. Though Mediterranean Revival was the most popular, a number of Tudor and Pueblo Revival houses — inspired by Spanish missions in New Mexico — were also built in St. Lucie Estates during the 1920s and 1930s.

Many of these original houses are still standing and contribute to the neighborhood’s historic character. St. Lucie Estates continued to expand with much of the subdivision located directly off East Ocean Boulevard, a busy thoroughfare that connects Stuart’s downtown with the Atlantic Ocean.

In 1926, when St. Lucie Estates began its second year, a brochure called “St. Lucie Estates on the Beautiful St. Lucie River in Stuart” was distributed nationwide. The brochure enticed readers with the abundance of tropical trees and foliage, boasting that more than one million plants and trees grew in a nursery to supply St. Lucie Estates.

An excerpt reads: “One street, shaded by the dense foliage of ancient mangos, has become one of the show spots of Stuart” — a reference to one of the boulevards lined with giant mango trees that remain a hallmark of the subdivision.

An era of prosperity after World War II brought a new wave of development to St. Lucie Estates, driven by returning soldiers and the baby boom demand for new housing. Unfinished streets were paved and a new building type — the ranch house — joined the older revival-style houses.

Now considered historic, these ranch houses broaden the inventory of early properties in St. Lucie Estates. It’s one of these mid-20th century modern gems that we recently moved into, the house that Carol Forster grew up in, built in 1955.

As it neared completion, Carol remembers her home being described in The Stuart News as “state-of-the-art with all the modern conveniences,” including jalousie windows and terrazzo floors that were modern in their day.

“Looking at our house as an architect, its most striking modern feature is its open plan,” Don says. “The living, dining and kitchen areas are all one space, an innovative feature of modern architecture, as is the large expanse of window openings that let the outside in.”

Indeed, it is the “outside” that makes St. Lucie Estates so appealing, as Carol observes:

“It was outside that held the magic for me — the line of mango trees was my private jungle, where my imagination was free to soar as I played, and where each tree had its own character and provided different climbing challenges.

“I spent my days with my cat Thomas, exploring, riding my bicycle, climbing and coming home with my pockets bulging with the guavas, rose apples and tangerines that grew in profusion on the neighborhood trees.” 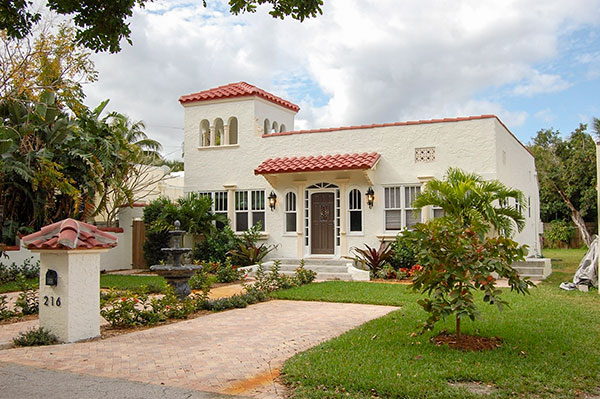 ST. LUCIE ESTATES TODAY
St. Lucie Estates Inc. continued to operate until early 1931 when Carroll Dunscombe gave up land development and became a lawyer. He practiced law in Stuart and died in 1976.
The legacy of St. Lucie Estates is largely its historic architecture and landscaping. Original houses are lovingly maintained, some dating back 90 years or so. Landscaping remains diverse and lush, including the colossal mango trees from Dunscombe’s plantation.

In You Can’t Go Home Again, Thomas Wolfe’s protagonist finds that too much has changed in his hometown and attempts to relive his youth are doomed to fail. But the essence of St. Lucie Estates remains intact. Enough to trigger long-ago memories and make it feel once more like home.