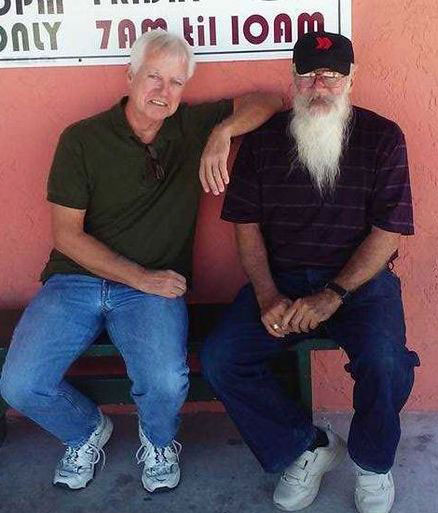 Siblings of Jimmy Willis are headed to the Florida Keys today in hopes of discovering what happened to their brother, a former Fort Pierce man who has been missing since Hurricane Irma sank his boat near Key West.

With the reopening of the Keys today to traffic, Michael Willis of Jacksonville and Eileen Snow of St. Lucie West are en route to Key West. They plan to stop first at the morgue for the Monroe County Medical Examiner to determine whether the body of a man found last week in a partially submerged boat is that of their brother, a Vietnam veteran who grew up in Fort Pierce.

Jimmy Willis, 70, had been living in the Keys since the mid-1970s, mostly on boats. Most recently, he had been living in a boat off Stock Island near Cow Key Channel. Authorities last week recovered a body in a partially submerged boat in the channel.

The body — a man in his 60s with long gray hair and a beard — fits their brother’s description, but a confirmation could not be established by family members because the Keys until today had been closed off to traffic.

“First stop is the morgue,’’ said Michael Willis. “If it’s not Jim, then we head to Key West to search.’’

Family members were hopeful after an acquaintance on Sunday identified a dinghy along the shore as Jimmy Willis’ — a sign that their brother might have made it to shore and a shelter before the storm hit.

Jimmy Willis is a member of the prodigious Willis clan that ran Tom’s Furniture store in downtown Fort Pierce in the 1960s and 1970s. Jimmy was one of 12 children of store owners Tom and Catherine Willis, who died in 1970. When Tom Willis died of drowning in 1974, the Willis children, some still in elementary and high school, were left orphans. Grown siblings stepped in to help raise the younger siblings.

Jimmy Willis was a stand-out football player at John Carroll High School in Fort Pierce. The Fort Pierce News-Tribune described him as a “hard-hitting halfback.’’

“He was so shy and quiet,’’ recalled Patricia O’Neill Durham, a member of the Class of 1966 at John Carroll. “He was a wonderful guy and really good looking."

Jimmy was later drafted in the U.S. Army and saw combat in Vietnam in 1969 and 1970. The family has a long history of military service. Their father served in the U.S. Navy, as did three of Jimmy’s brothers.

Michael Willis said the war forever changed his brother, a kind and simple man who valued his independence and solitude. Because Jimmy had no phone or electricity, family members would occasionally drive to the Keys to make checks on their brother. Such a check was planned by sister Eileen Snow Sept. 9 but was canceled as Hurricane Irma set its sights on the Keys.