Eden on the River 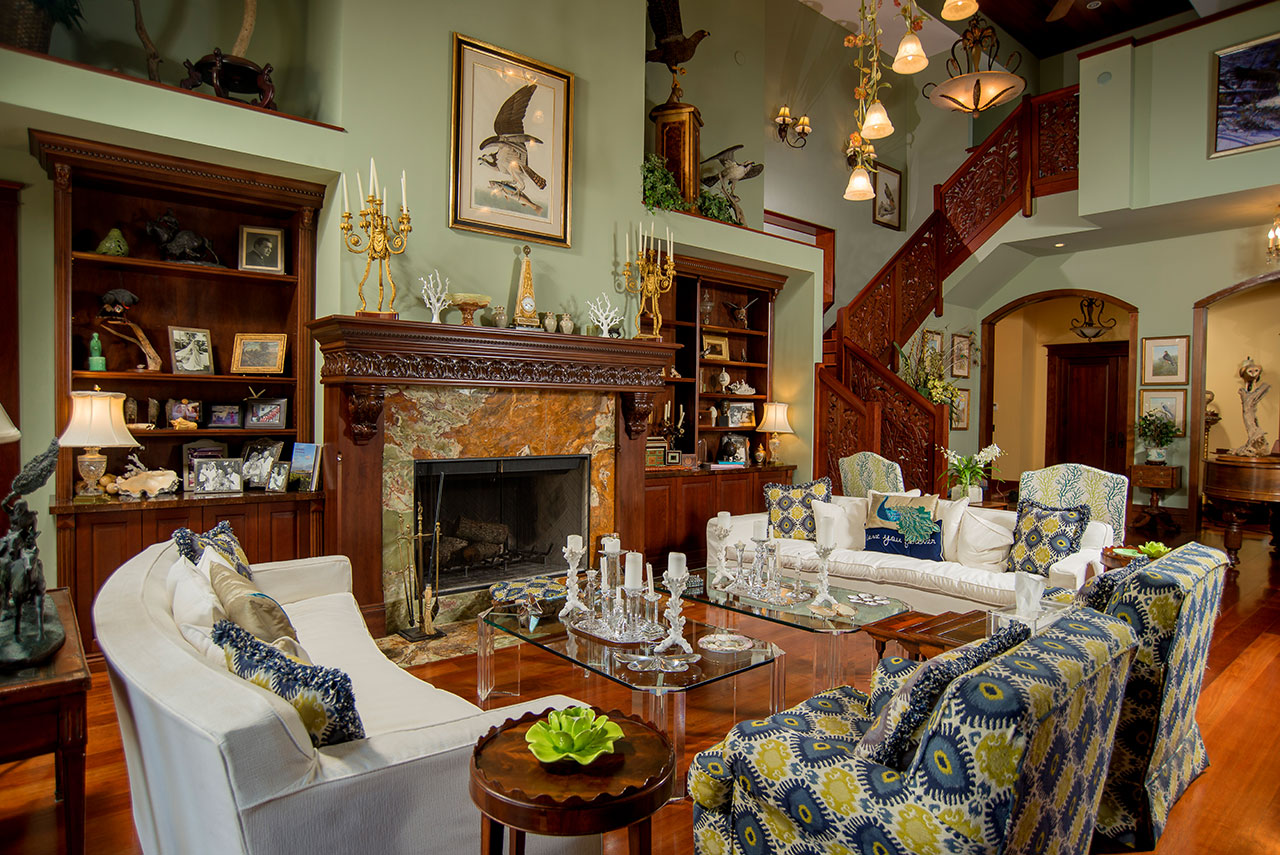 The motif for Rufus and Melynda Wakeman’s living room is Florida wildlife with a host of treasures collected during their travels around the world. PHOTOS BY ROB DOWNEY

The Hammock is Melynda and Rufus Wakeman’s private Caribbean resort-style estate with panoramic views of downtown Stuart and the Roosevelt Bridge.

Built on 2.2 acres in Rio 10 years ago, the 15,000-square-foot home is surrounded by mature, lush tropical landscaping and a stunning pool you might see in Costa Rica. Several hammocks offer different views of the property, an oak hammock itself.

The Wakemans moved a few houses down from where they were raising their three children when he realized they couldn’t play in busy Alice Street. “I bought two lots, increased the size of mine and sold the other one,” said Wakeman, a conservationist and record-chasing fisherman who has fished all over the world.

“I grew up in Palm Beach, so I want boats in my driveway and I dohttps://indianrivermagazine.comn’t want to live in a gated community,” said Rufus, a direct descendant of John Deere, the blacksmith, inventor and manufacturer of agriculture and farming equipment. “I probably overbuilt for the neighborhood, but oh well.

“This is a great space. We had to move so the kids could play football and volleyball. They had their own private Idaho. This is a nice, flat piece of land. Our pool is spectacular. It is not a square pond. There is a little more maintenance and upkeep, but that is the price you pay for recreating a tropical paradise.”

The undulating pool has a grotto with a waterfall, slide, swim-up bar, diving platform and an island that you walk the plank over water to sit in a hammock. 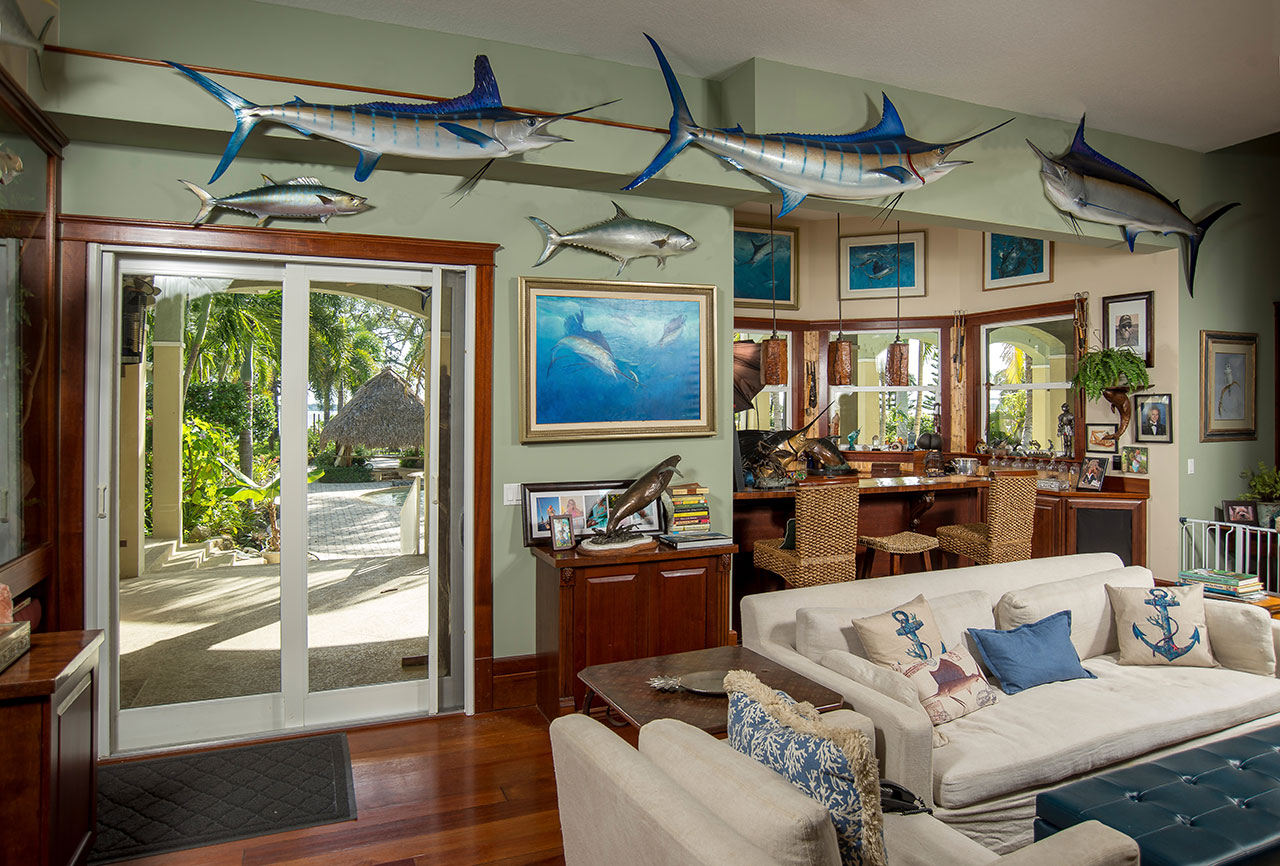 The family room has a nautical theme with mounted replicas of billfish Rufus has caught over the years. The lamp shades over the wet bar were made out of cactus from the Galapagos Islands.

INTERNATIONAL DECOR
The inside of the spacious house is like a museum with commissioned carvings everywhere of Florida birds of prey, so intricate they look like stuffed birds. Relics from the Wakemans’ travels to Africa, Central and South America have been used as design elements in the living and family rooms.

The kitchen island has a granite countertop from Spain that has a fossil in it that looks like an alien’s head. Melynda made the lamp shades over the family room wet bar from cactus shipped from the Galapagos Islands. The bar is made of coconut shells and cinnamon wood.

Extremely dense suar wood, also known as monkeypod, was used for the main level flooring, shelves and cabinets and all of the heavy wooden doors. The wood from a sustainable forest in Bali was pruned from trees that will grow back.

CELEBRATED ANGLER
Rufus, who has owned the River Palm Cottages and Fish Camp in Jensen Beach for 20 years, is also a semiretired charter captain. He holds the record for landing a 53-pound dolphin caught on 16-pound Tippet line in Mexico, the only one of 10 world records he once held. In 2015, he narrowly missed being just the third person to complete the Royal Billfish Slam in one year, catching eight of nine species of billfish with a fly rod in waters off Australia, Hawaii, Mexico, South America and the Dominican Republic.

Rufus keeps his flats boat in his gated driveway, which he calls the motor court that has room for up to 15 cars in addition to two four-car garages. One garage has an unfinished man cave on the second floor, he said.

The basement is an enormous 5,000-square-foot game room with pool, ping pong and air hockey tables, TVs, couches and a workout area. The first floor is the master suite, living room, library, formal dining room, family room with a wet bar next to the kitchen and breakfast nook.

Everything opens out to the large covered patio, summer kitchen and two mammoth suar wooden tables with seating for 30 people. The second floor has three bedroom suites with full baths and decks overlooking the pool and the river. A detached guest house was moved 40 feet from its original location to preserve oak trees. 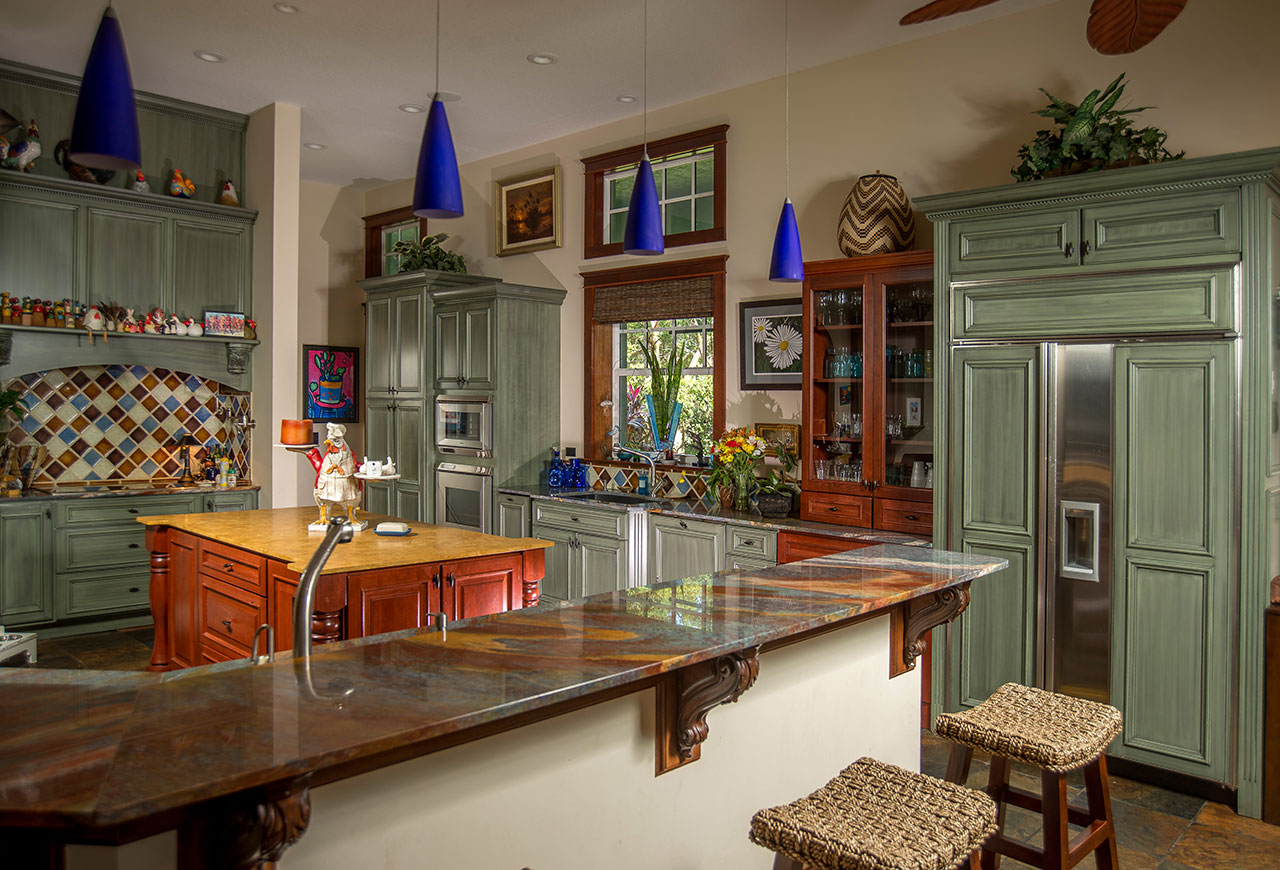 The spacious kitchen with plenty of counter space has been the site of many Thanksgiving buffet dinners at the Wakeman house.

ECO-FRIENDLY HOME
When the Wakemans built The Hammock, it was the largest certified green home in Florida. As a conservationist, Rufus wanted to build as green a home as he could, but the choices to earn the green rating were prohibitively more expensive then than they are today, he said.

“We had a great time and a lot of fun working with Rufus and Melynda. It was quite the undertaking,” said Gary Kelly of Kelly and Kelly Architects in Stuart. “They like to entertain and they wanted the house and the outside to be a place where their kids and their friends would want to go there and enjoy it.

“It was the first certified green home in Martin County and it was the largest game room we ever designed,” Kelly said. “We made all the living room walls so Rufus would be able to display his rod and reel collection.”

Marlin Wakeman, 18, is a high school senior and his sister 20-year-old Jazie is in college. Maryna, 24, has begun a career as an emergency room nurse following in the footsteps of her mother, who was an ER nurse at Jackson Memorial Hospital in Miami.

BUTTERFLY SANCTUARY
Melynda has a green thumb and is constantly planting and replanting around The Hammock. “I am the jungle mama. My mother was a Master Gardener and my grandmother grew everything we ate,” she said. “The only thing we went to the store for was flour, sugar and frosted flakes. I spent my summers shelling peas and picking plums.”

A self-taught butterfly expert, Melynda has built a butterfly hatchery and plans to travel to Mexico to see the migration of Monarch butterflies. She breeds 10 different species by growing the plants that provide nectar and other plants that will serve as hosts for butterflies to lay their larva. “I am Mother Nature in there,” she said.

“Here we are like the (Beverly Hillbillies) Clampetts,” Melynda said. “We had a duck who raised her ducklings here for six years. We have four cats, two dogs and we get visits from possum, raccoons and birds. We had a wild turkey come through one time.”

On the Fourth of July last year, more than 300 people enjoyed the Stuart fireworks show from the yard, but the couple is more comfortable entertaining 20 family members and friends for a southern-style outdoor Thanksgiving feast. 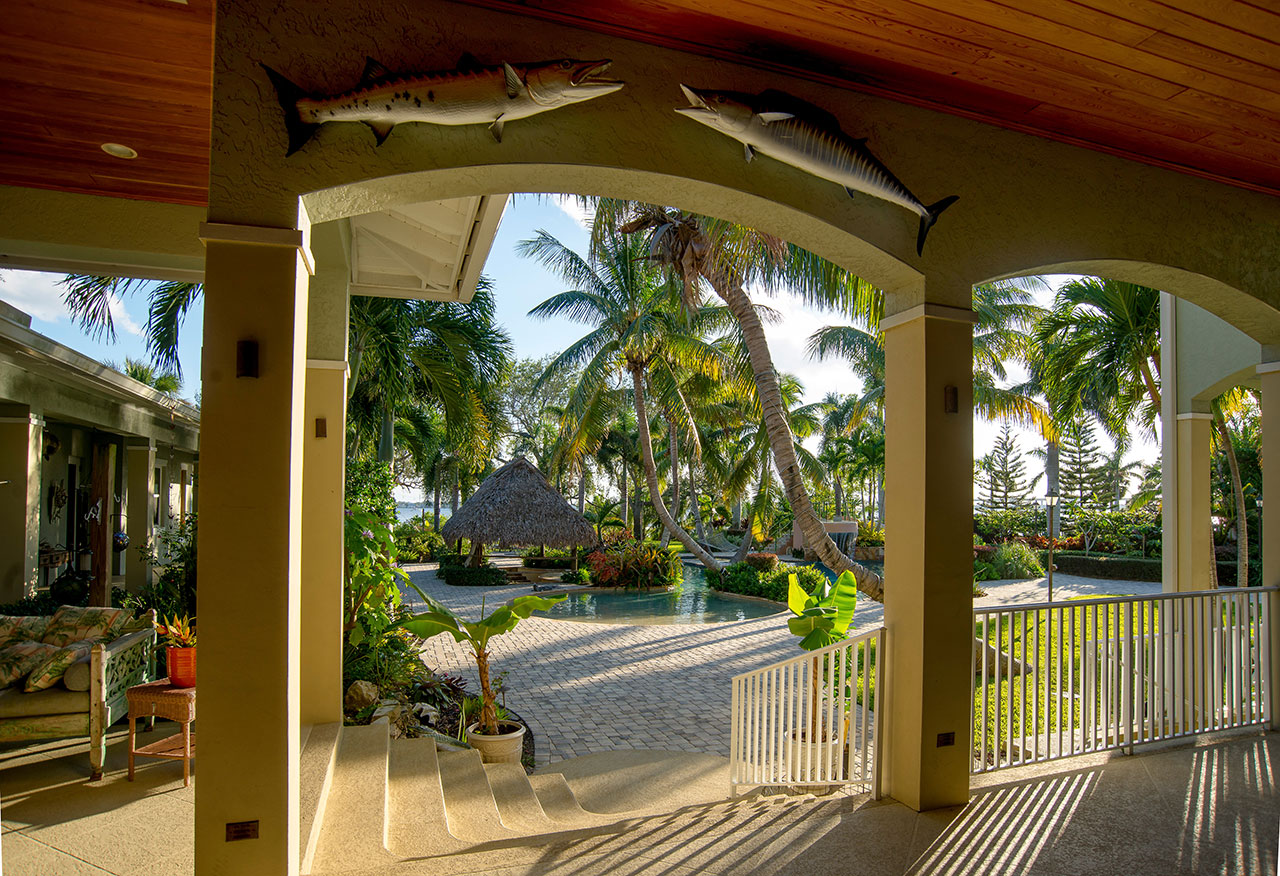 Some of the design ideas for the Wakeman’s tropical pool came from the Si Como No Resort and Wildlife Refuge in Quepos, Costa Rica.

RIVER CONSERVATIONIST
Looking north across the St. Lucie River toward Rio, the house is the only one that can’t be seen for the foliage. The Wakemans’ paradise was threatened two years ago with the appearance of harmful blue-green algae.

“We live here on the banks of the St. Lucie River and we lived in the aerosol plume of that disaster,” said Rufus, a Florida Institute of Technology graduate. “I hate to see the political injustice. The everglades need fresh water. And the EAA (Everglades Agricultural Area) used to be the everglades. We have to move the water south of the lake and we have to save the estuaries. The water is still in crisis.”

Always a waterman, Rufus is active in efforts to save Florida rivers and has testified at hearings in Tallahassee. For 18 years, he has been the president of the Martin County chapter of the Coastal Conservation Association, a fishermen’s advocacy group. The couple also open their home on occasion and the River Palm facilities to benefits for environmental causes.

“This is an easy house to live in,” Rufus said. “It is informal. I love to look outside every day and see everything natural and aesthetically pleasing. When the kids are grown and gone, we will probably have to downsize.”

Until then it is another day in paradise at The Hammock.