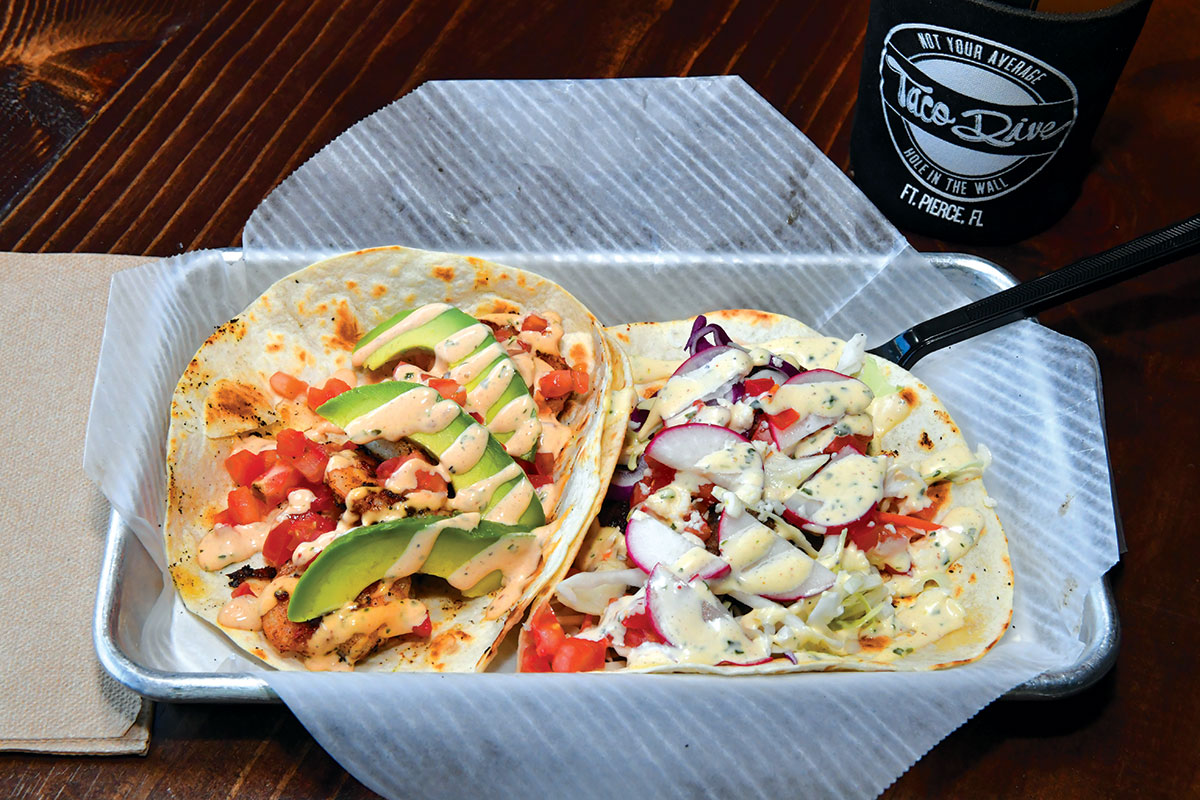 Delicious fare, such as the shrimp taco on the left and steak taco on the right, are served with special sauces at the Taco Dives in Fort Pierce and Vero Beach. ED DRONDOSKI PHOTO

Taco restaurant is not your typical hole in the wall

In 2007, two teachers/coaches traded their textbooks for aprons to enter the chaotic culinary industry. Nearly 10 years after their head-first dive into restaurant ownership, the two have returned home to test their hard-earned skills by opening the highly popular Taco Dive Downtown Fort Pierce and the newly opened Tace Dive Downtown Vero Beach.

Bonnie Turk and Allison O’Connor, who met as coach and player at Port St. Lucie High School, sought out a franchise opening with the popular Hurricane’s Grill and Wings restaurant group. They approached the owners of the restaurant on South Beach to see if there were an opportunity to buy a franchise.

“They looked at us,” O’Connor says, “and said, ‘Two teachers running a restaurant? No way. You won’t make it.’”

Discovering that a franchise was open in Jacksonville, they uprooted themselves from their community of family and friends and took up the challenge.

“It was very difficult at first,” O’Connor says. “We were living like a couple of college students, counting our coins and working long hours. There were a lot of difficult, and expensive, lessons to learn. But, we survived and the restaurant thrived.”

O’Connor and Turk sold the Hurricane’s franchise and opened a new place in Jacksonville, the Saucy Taco.

A couple of years ago, they decided to move back to the Fort Pierce area, bringing with them a faithful employee, Kelly Greiner, who is now one of four co-owners. The fourth co-owner is O’Connor’s cousin, Joel Rucker. Together the four, who range in age from the 20s to the 50s, offer input on serving potential customers in their respective age group. This gives them a well-rounded approach to serving people from various walks of life.

In February 2015, the four opened Taco Dive Downtown Fort Pierce. Touted as “not your average hole in the wall,” the small eatery has become very popular with the downtown lunch crowd and as a casual place to eat and have a drink in the evening. Located in a little strip of shops on the east side of North Second Street, there is often a wait for a table; a wait well worth the time.

O’Connor credits their quick rise in popularity to a couple of factors: the number of friends and family they have in the area and the amount of work that goes into perfecting the food.

Noting her perfectionist tendencies, O’Connor adds that the group is a strong team that works well together and gets along.

“I think that helps us keep the continuity of the service,” she says. “It is hard work, and we all want to be consistent and, at the end of the day, we are striving for perfection.

“One thing we take special pride in is that we don’t just make customers; we make friends.”

O’Connor, Greiner and Rucker are working daily at their new location, Taco Dive Downtown Vero Beach. The restaurant has the same kitschy decor, with O’Connor explaining how much time and effort they put into the unique light fixtures, countertops and restroom decorations. The group even constructed the tables for their eatery. It’s the kind of job where you work hard and hardly get a day off, O’Connor quips. The restaurants are closed on Sundays so they have one day for rest or outdoor activities.

Over the years, she says, they have learned that the lunch crowd wants fast food, but that they prefer it to be fresh and fast. They have worked to perfect the timing and service to accommodate the lunch group.

For those who have a larger appetite, the Drunken Burrito will fit the bill. Made with either ground beef or shredded chicken, the burrito is priced at $9. Tacos range in price from $4.50 to $5, with offerings of veggie, pork, cilantro chicken, ground beef and steak. On the menu, customers also will find the Irish Taco and Taco Bella, among others.

Chips and various dips, including guacamole, which is made fresh daily, are available as appetizers. Turning a taco into a black bean and rice bowl, for an additional $4 charge, is a possibility. And for those who prefer a less spicy lunch, there is a burger on the menu, along with a barbecue pork sandwich, both at $7, and various salads, priced at $6-$8.

To wash down the excellent, fresh food, the restaurants offer a selection of craft beers, along with standard beers, wines, iced tea and Coke products. Bottled water is also available.

Taking everything they have learned from operating their various enterprises, the co-owners have worked to make the two dives popular spots on the Treasure Coast.