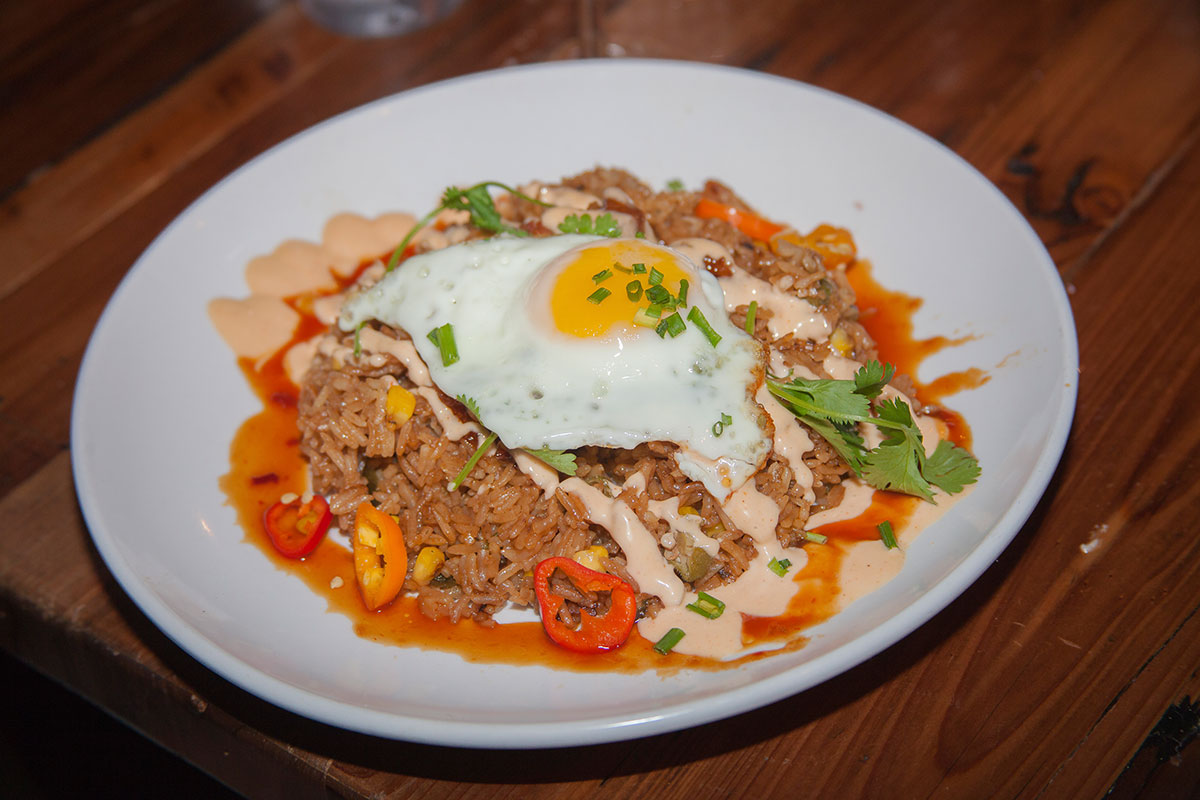 Topped with fried egg, one of the popular dishes at Southern Social Kitchen and Bar in Vero Beach is the Southern Ramen, which brings some sweet heat to the pork brisket topped by the noodles. GREG GARDNER

Patrons are encouraged to pull up a chair and share delicious food, lively conversations

In the Historic Arts District in Downtown Vero Beach restaurant-goers will find a restaurant devoted to southern cuisine and hospitality.

Southern Social Kitchen and Bar, which opened in 2016, draws a following that includes fans of craft cocktails and progressive twists given traditional southern recipes. The tables are positioned to allow conversation and there are no TV screens or live music. A pleasant mix of blues and light country wafts softly in the background.

The main walls were covered with wood from pallets, giving it a rich barn feel. In the main common room, Be Social is emblazoned along the wall in 3-foot-tall letters. In the other dining room and bar, Hog Heaven is lit with dozens of bulbs and it looks like a marquee on Broadway. Large art pieces give both rooms a rural, farming motif. Accent walls are semigloss black with simple sayings, accompanied by folksy yet fascinating chalk work.

Co-owner John Scharr, in addition to being a hands-on restaurateur, is also quite an artist having created the whole piece that weaves throughout Southern Social. It is worth a visit to admire the craftsmanship. After it was complete, the artwork was sprayed with a sealant to preserve the chalk.

Southern Social is the creation of Scharr, his best friend Nick Novak and his wife Angela. The two men grew up as neighbors and are like brothers. The Novaks also operate the first craft cocktail bar in Vero Beach, Filthy’s Fine Cocktails and Beer, a few blocks away. “Three heads are better than one,” Scharr said.

A SOUTHERN VIBE
“We want to bring back that family feeling to the table where people talk,” Scharr said as he took a short break from preparing the restaurant for the nightly opening.

“We locked in on this place, but it was 100 percent transformed from the previous restaurant. We want to have that southern vibe. We don’t want to be the bar so we have our funky playlist for music. The table is a place where people talk and chat and be social.”

The menu has a variety of dishes prepared in different ways. While the atmosphere is slow food, service can be fairly quick depending on how many people are in the 135 seats. The communal room has an island high-top table where people are often seated in small groups until it is full. White cloth napkins contrast nicely with the worn sturdy wooden tables.

“The cumulative vision is executed by our executive chef Brandon Basista,” Scharr said. “It is traditional southern fare elevated. It is art on the plate. It is how you plate and present it. People eat with their eyes first. I love to see the looks on people’s faces when we bring food out.”

Close to 20 sauces are made in house and all desserts are homemade. The restaurant uses some locally sourced vegetables and buys meat from farms across the country, Scharr said. No one will roll an eye if you ask to put a fried egg — for $2 — on just about any dish including chicken and waffles. Scallops, shrimp and chicken can also be added to any meal or salad.

CORNBREAD WITH A KICK
Servers first bring to each table jars of water and a basket of the famous fresh, steaming jalapeno corn bread. “We take the seeds and the veins so all you have left is the beautiful chili flavor,” Scharr said.

Appetizers include three deviled eggs with candied bacon and chives in an impressive presentation. Smoked chicken wings come with several sauces including apricot ginger. Diners come back for the fried avocado wedge appetizer. From the garden, the Bubba Bowl is a big mix of field greens, avocado, jasmine rice and summer vegetables to be topped with one of several homemade dressings.

Ever popular is the Company Burger, which always commands attention as it is delivered to the table. The two house blend patties, buns, bacon jam, American cheese and Bama BBQ sauce stand almost 6 inches tall.

Southern Ramen is an asian-style dish with smoked pork shoulder, marinated egg, mushroom and cilantro in a chili sauce. This dish has some heat, but is a wonderful mix of flavors with the marinated egg as the grand prize.

GO BANANAS FOR PUDDING
A shareable dessert, made from Angela Novak’s family recipe, comes in a small mason jar with banana pudding and crushed vanilla wafers that melt in your mouth. The dessert menu is always changing, but a recent offering was intriguing. The Campfire Buckeyes dark chocolate brownie is filled with peanut butter, fried in a graham cracker tempura and served atop charred marshmallow.

“Our menus are carefully thought out and we rely heavily on input from our customers,” Scharr said. “We have an evolution of menus. We are working on a fall menu and we will have another menu for mid-season. We are elevating southern comfort food to give it more of a contemporary feel and taste. This is not your grandmother’s kitchen.”

While Southern Social is known for its food, many people come in to sip one of the 14 crafted cocktails, with the most expensive just $9. Bartenders use liquid nitrogen to chill glassware or freeze ingredients. Nitrogen also creates a smoky effect when added to drinks. A large centrifuge is used to make instant fusions.

“Nowhere in this town can you find more legit hand-crafted cocktails than here,” Scharr said. “Our Chartreuse is made by alpine monks, but we make our own syrups.”

The first Wednesday of each month is the kickoff for “Cocktail for a Cause.” For the rest of the month the proceeds from a specific drink is donated to a local charity. In October, it was a pink lemonade drink to fight breast cancer. There is also a special blend of orchard gin and small batch tonic on tap. The Slow and Low Manhattan and Company Old Fashioned mixes are bottled in-house and served with a frozen glass and garnish.

A very tasty specialty drink is the How Tea Should Bee. A blend of milk-washed tea vodka, honey syrup, lemon and salt, the cocktail is smooth and you can taste the honey, tea and lemon. The Perfect Pear Margarita is a careful mix of Partida Blanco Tequila, Thatcher’s Prickly Pear Liqueur, agave nectar and lime juice. Mixed with salt on the glass, the slightly sweet rather than sour taste is refreshing. For rum lovers there is the Black Pearl made with Black Magic Rum, Mandarine Napoleon, Orgeat (almond) syrup, pineapple juice, lime, and coconut cream.

“We try and make people feel comfortable and at home like they were at the home of a family member,” Scharr said. “We want them to feel that sense of belonging.”

Hours: Open daily 5 -10 p.m., and until midnight Friday and Saturday