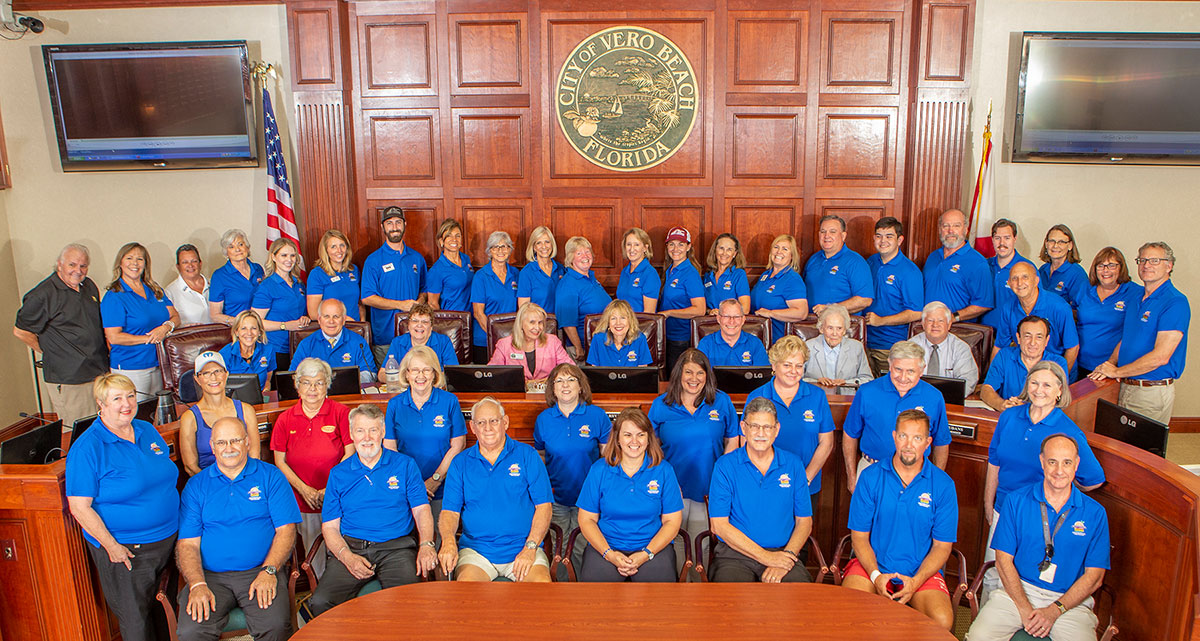 It began as a casual conversation nearly 16 months ago between City Clerk Tammy Burick and Councilman Tony Young. The two had worked together on Vero Beach’s 75th and 90th anniversary celebrations and thought the city’s centennial celebration should be bigger and better.

So they met with Rob Slezak of the recreation department and came up with a list of ideas. Young presented their plans, which the city council approved, and they were off and running. A committee of dedicated residents, business owners and politicians came together to prepare a year of varied activities for this once in a lifetime opportunity to share the city’s history, accomplishments and people.

“We honestly never dreamed it would evolve into this huge yearlong event,” said Bursick, a native Floridian and city clerk for 33 years. “This community is so proud of their hometown and so emotionally charged that volunteers and sponsors came out of the woodwork. We now have over 50 committee members, literally thousands of volunteers and about 25 sponsors broken into a dozen or so subcommittees. It’s literally exploded and it’s going to be so much fun.”

Young, a Vero Beach native, is a councilman with long family ties to the community. His grandfather, A.W. Young, was Vero’s first mayor who was elected in 1919 and served an additional term in 1935. Tony had a long and distinguished career in the Army that allowed him to travel the world, but when it came time to retire he chose to come home to Vero Beach.

“I love this town,” he explained. “Coming home was the only option.”

Young worked with the Veterans Council of Indian River County and was instrumental in spearheading the redevelopment of the city’s Memorial Island Sanctuary.

“The best part about working on the centennial is discovering how phenomenal the people of this community are,” he said. “Everyone has come together with a common goal of preserving the past for the future. I believe that whatever time and effort the volunteers invest will be taken forward for the rest of their life. It is truly an honor to be part of such an extraordinary event.”

Beverly Paris, co-owner of Paris Productions and Vero resident for more than 35 years, has taken on the monumental task of updating the ever-changing calendar.

“Events are filtered to me through a marketing committee and then I put it out to the public,” Paris said. “I honestly don’t think any of us thought it would grow this quickly. It’s so exciting to see the entire community come together to celebrate the special place that we call home. The calendar is posted on the Vero Beach Centennial website at www.verobeach100.org so everyone should check it often.”

Paris is very familiar with Vero Beach history having served on the 90th anniversary committee and as one of the founders of Downtown Friday and the Hibiscus Festival for Mainstreet Vero Beach.

The excitement is sure to mount as the events unfold. While it’s taken more than a year to plan the festivities, it’s taken literally a century to plan such a beautiful city. Vero Beach has become an enviable model of forward vision and careful planning by our forefathers. It’s unique blend of oceanside serenity, lush tropical landscape, exquisite architecture, and controlled growth has created this jewel on the Treasure Coast. So, whether you call Vero Beach home, you’ll find something for everyone during the 100th birthday celebration.