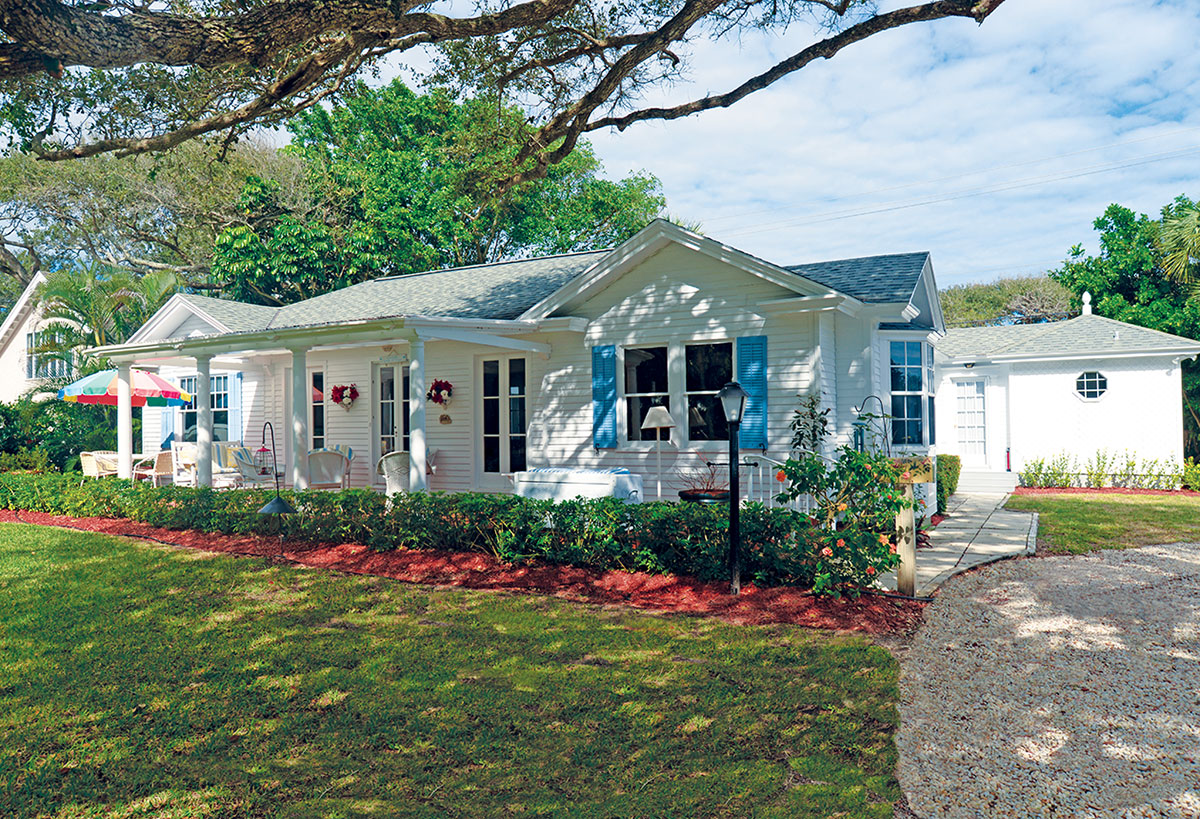 The Bellis home came over on a barge and was a prefabricated Hodgson House, very popular in its day. ROB DOWNEY PHOTOS

Riomar home harkens back to a more genteel era

Long before there was John’s Island, Windsor or The Moorings, there was Riomar. Nestled just north of Vero’s South Beach neighborhood,the streets are lined with lovely live oaks, giving it a decidedly Old Florida feel.

In the early to mid-20th century, Riomar was a village unto itself. Everyone knew everyone and many of the residents were people of means who were well-known outside the village. There was the Grumman family, co-founders of Grumman Aeronautical Engineering (now part of Northrop Grumman), and the Brashears, former owners of the Drake Hotel in Chicago.

Such families were attracted by the understated character of Riomar and of Vero Beach, in stark contrast to the flashy opulence of places like Palm Beach. One couple, Blair and Jim Bellis, remember this era well. Their home on Painted Bunting Lane is a testament to a simpler time, a time when good conversation was valued and could always be found in the Shell Room at the Riomar Country Club — the epicenter of island life for residents. In those days, everyone who lived in the village was a club member.

On Club Lane in a handsome Mediterranean revival building, the club itself was simple. “It had a nine-hole golf course, and the pro shop was just this mobile home. It wasn’t much, but we all loved it,” Jim says.

Built in 1919 before the barrier island had electricity, the golf course may have been small, but its location along the Atlantic Ocean made it stand out then, as it does today.

NO LOCKED DOORS
The Bellises started going to Riomar as a young couple during winter vacations from their home in Oradell, N.J. They stayed with Blair’s parents, who bought the house on Painted Bunting in 1953 after having rented it for several years. “There was an aura about Riomar then,” Jim, 93, says. “It was a much tighter community. No one locked their doors and the friendships were much closer knit.” 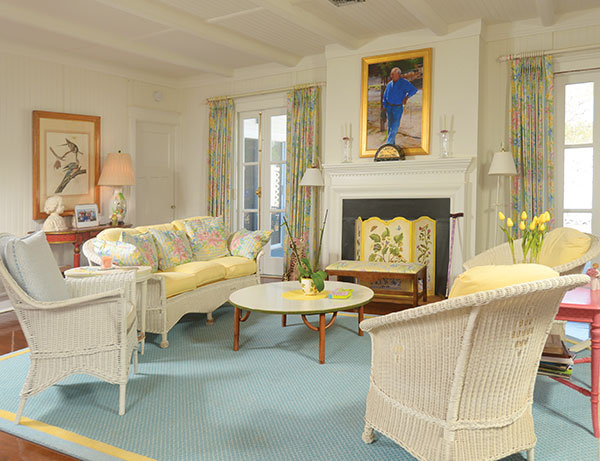 The addition of French doors created a light-filled room that is complemented by wicker furniture left by a former owner.

Blair, 89, concurs. “There was always someone to have dinner with at the club and after dinner we’d all go to the Shell Room. Someone would play the piano and we’d sing and have a ball,” she says, reminiscing.

In the 1930s and 1940s, the club owned several houses and rented them to members during the winter high season. One of those houses was the Bellises’, which was coveted as it was a corner lot with Painted Bunting on one side and Ocean Drive on the other.

Like some other homes on their block, their house was a Hodgson House, a well-respected brand of prefab homes hailed for their craftsmanship in the early 20th century.

UNDER CONSTRUCTION
The house was brought over on a barge in 1903 in a series of wood panels that were bolted together on site. At that time, the house had a sun porch that opened onto a small living room. On either side of the living room were two bedrooms connected by a bathroom for a total of four bedrooms and two bathrooms. There was no kitchen. Families were expected to eat their meals at the country club or its beach club, which is still across from the Bellises on Ocean Drive.

But the home did include a separate carriage house for a car and an upstairs apartment for a butler, which everyone had in those days. Today, the carriage house has been renovated and the Bellises’ cook and housekeeper, Becky, lives there.

By the time Blair’s parents bought the house, a kitchen had been installed and one of the bedrooms had been turned into a dining room. The Bellises use the master bedroom and have turned the other two bedrooms into a den and Jim’s office. 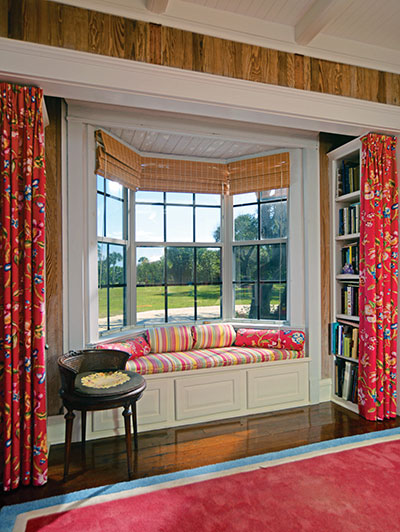 The den, which is infused with an array of beautiful coral colors, has a great view of Ocean Drive.

When Blair’s parents died, she and her sister inherited the property. Blair and Jim bought her sister out in 1975 because they loved the house and Riomar so much. Their main residence was still in New Jersey, but they came down with their four children during winter breaks.

Today, the Bellises spend most of the year here, except for the summer, which they spend at their home in Michigan. But their Riomar home is where their heart is. “We love it, absolutely love it. That’s why we try to preserve it as much as possible,” says Blair.

At times, preservation has proven to be challenging because of the home’s one defect: It was noisy. This was caused by issues like doors that didn’t quite close. Finally, the Bellises decided to move the house due west on their three lots and build a new home on the original site.

“But the strangest thing happened,” Blair says. “Once we moved it, everything fell into place. Doors that wouldn’t close now close. It was so pleasant we decided to stay put.”

This created a light-filled room complemented by the white walls and white wicker furniture, which Blair’s parents had inherited from the previous owners. 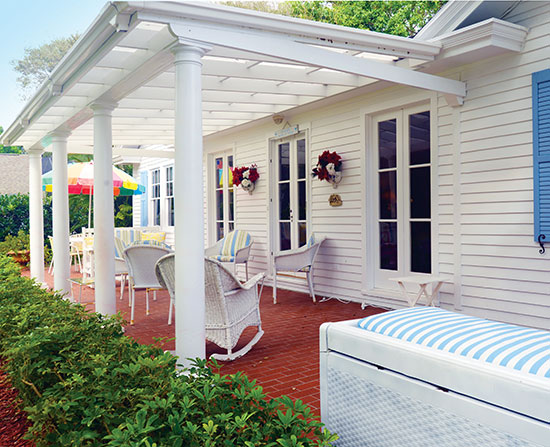 One of the Bellises favorite spots is the front porch where there’s always a breeze and they can watch their neighbors walk their dogs.

But what imbues the Bellis home with its cozy feeling is the hues of the rainbow that fill the house, from the pale blue and white striped curtains decorated with pink and yellow flowers in the living room to the coral curtains in the den. We love color,” Blair says.

Helping choose materials and the overall look was Brenda Levitt, an interior designer in Vero Beach. “She has helped me with a lot of this. She has a wonderful eye and I like her personality, and it’s just worked,” Blair says.

SPLASHES OF COLOR
The decor is also whimsical, hinting at a keen sense of humor. The guest bathroom is a good example of this with its playful mural of a girl’s pink bathing suit; straw hat with daisies and blue ribbon; and a red, yellow and aqua umbrella on the white clapboard wall. And so is the beach mural with a kite flying willy-nilly that decorates the kitchen cabinets, or the two bears donning dapper hats sitting on a pink wicker chair in the living room. “Those bears have been lurking around forever,” Blair says.

The master bedroom, which is done up in soft yellows, is a bit more subdued. And recently, the master bath was renovated. The original claw-foot bathtub was replaced by a modern shower enclosed in bright, white tile with two red stripes. “That’s my bathroom,” Jim says.

They moved the claw-foot tub into what is now Blair’s bathroom, a new addition to the house on the other side of the master bedroom. “I wasn’t going to let that tub go, I love it,” she says with a smile. 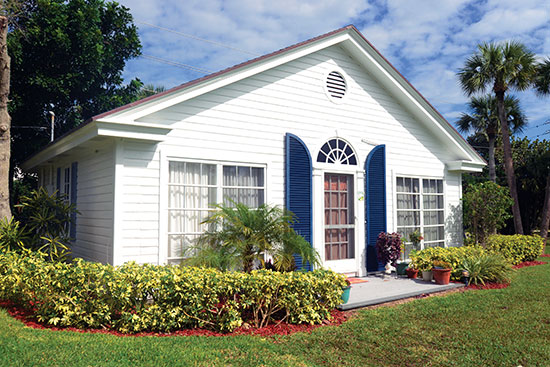 The former carriage house is the guest cottage for the couple’s cook and housekeeper, Becky.

Another change was the installation of sliding glass doors in the master bedroom and dining room, bringing tons of light into the rooms as well as making it easy to walk onto the back patio, which was originally just a grassy area.

Not that they spend much time there, however. They prefer the front porch. “We just love it out here,” Blair says. “There is always a breeze.”

And they also enjoy the view of the beach club across the street on Ocean Drive, or their neighbors walking their dogs on Painted Bunting, many of whom stop to visit with the Bellises’ dog Rocky.

The Bellises continue to be members of the beach club, which is still part of the country club, but a lot has changed since they first joined. Today, there are more members and they hail from all over the island, not just Riomar. And there is a different club building, although it’s still on Club Lane a few 100 yards south of the original building, which was sold to St. Edward’s School in the 1960s. A few years ago, St. Edward’s sold it to a developer who razed it and is building 10 luxury homes in what is ironically called Old Riomar.

In addition, nine golf holes were added in 1963 and the club recently underwent a major face-lift. “I know most people want an 18-hole golf course. But back then, when it was just nine holes and we wanted to do 18, we’d just go around twice,” Jim says wistfully. “But we still enjoy the club. It’s always nice to take the golf cart there for dinner or a drink. It’s still a special place.”