Perhaps one of the most durable connections to heritage is a home and a neighborhood, one that is built up, lived in and occupied by succeeding generations.

This is what has happened with Kit Fields. Five generations of her family have come to Painted Bunting Lane, in the Riomar neighborhood of Vero Beach, and made it their home. The latest iteration is her parents’ beach cottage, which Fields and her husband, Lundy, reimagined and reconstructed. It’s just down the block from where her great-grandmother began spending the winters in the 1930s, where her grandparents also lived, and where Fields visited as a child.

Fields and her husband were living in London when they decided to purchase her parents’ home. They owned a house in Central Beach on Holly Lane that they used as a home-base while Lundy’s job took him all over Europe. But when his work brought him back to the U.S., they couldn’t resist the prospect of purchasing and rebuilding the family home and continuing the Painted Bunting connection and tradition.

The modest Riomar cottage, just two blocks from the ocean, was purchased by Rody Johnson and his wife, Katharine, in 1997. Katharine, a talented artist whose work was well known in Vero, died in 2008. But her art work lives on, displayed throughout the Riomar home.

UNEXPECTED PROBLEMS
As the couple began the rebuild, they discovered there was work that needed to be addressed at every step. New septic, plumbing, electrical, which eventually led them to take the structure down to a few concrete walls and slab. They added only 2 feet onto the footprint in the back, and on the west side of the house.

“It was just a stripped down shell,” Roseland says.

An architect in Vero for 30 years, Roseland built numerous homes in Windsor while with the architectural firm Clemens Bruns Schaub. He considers the style of the Fields home as minimalist Anglo-Caribbean.

He became very familiar with the style from the Windsor projects and worked with the couple to create a less ornate version.

“I presented the idea to Kit and Lundy, and they loved it,” he says. “Kit has a good design sense and they were easy to work with. Both of them understand design and enjoy the process.”

Reconfiguring the 1960s vintage cottage included opening the floor plan, which was achieved by taking down walls and raising the pitch of the roof.

FAMILY HOMESTEAD
No longer a modest cottage, the 2,700-square-foot home is new but reminiscent of the house once occupied by previous generations.

“If you walk through the house you can see the original floor plan,” Fields says. “We kept the old galley kitchen in the same place but opened it up, and there’s a beam where the kitchen wall is as a reminder.”

The kitchen serves as the hub of the house, according to Roseland. “If you’re cooking in the kitchen, you’re not sequestered or off to the side,” he says.

His design preference is to minimize the wall appliances. “Walls get in the way,” Roseland says.

But Fields wanted a wall oven, so the architect created an L-shape kitchen with a peninsula and an island, facing each other, with the oven around the corner.

“Using an oven is not something most people do every day in Florida,” he says.

And consequently, setting it further away from the rest of the kitchen, “doesn’t heat up the entire central part of the home,” she says.

“Lundy is a water bug,” Fields says. So, they built an enclosed outdoor shower space, accessed through the backyard, which connects directly to the master bathroom and serves as a perfect convenience after surrendering to the temptation of the surf just down the block.

Other outdoor components Roseland suggested were a fireplace and covered dining area.

“When I do a full house construction I always float the idea of an outdoor fireplace,” he says. “We get crisp nights during season, and you can light up a fireplace outside which you probably wouldn’t inside.”

And then there are the garages; two single-car garages, one on each side of the house. It’s an unusual configuration but solves one of the major challenges.

“We’re pretty close to the road and needed the setback, so we couldn’t figure out how to get a two-car garage,” she explains.

She and Roseland came up with the idea from another Central Beach home she’d seen. Placing one garage on each end of the home brought the exact results they needed. Lundy’s east side garage enters into the laundry room, while Fields’ west side garage connects to a hallway that leads into the kitchen.

ART IN THE FAMILY
The generational connection in the house is more than simply walls and location. The home is filled with art from deep within the family talent pool.

“My mother’s art is everywhere,” Fields says. The current master bedroom was once Katharine’s studio. “It had racks and railings that held her artwork. We painted them white and they’re in the living room/kitchen area now where we display the art.”

Katharine’s art includes pieces she’d given her daughter over the years, including portraits of her children. There’s also a piece, by well-known Vero artist Rene Guerin, of Katharine working on a painting at the beach nearby.

More family art continues the generational link. Fields’ daughter, Caroline Hilson, an illustrator who studied art at the renowned Central Saint Martins College of Art and Design in London has her art on display in the home. As does her nephew, Will Johnson, a freshman at Dartmouth, known locally for his nature art, including his bird illustrations.

Exterior elements as well are holdovers from Fields’ parents. A great oak tree still dominates the backyard and clinging to it is the same staghorn fern her mother attached to the tree.

“It got sad looking during construction,” Fields says. “I would come by and give it a banana peel and a bottle of water, I wanted to maintain it.” The now robust fern thrives alongside her mother’s vintage orchids that hang in baskets from the trees. Fields describes them as old and ratty but they still bloom. Two came into flower this year and, she says, “the whole family came over to look at them.”

TRADITION CONTINUES
Another familial connection is a tribute to the Fields family having spent 20 years, on and off, living in England. According to Fields, it’s a British tradition to put a name on a house. After her parents visited them in England her mother had a plaque created for the Painted Bunting house that reads: Mullet Mansion. The nameplate hangs on the back patio.

The house has bestowed memories on its occupants over the years, including welcoming a new family member. Fields’ father, Rody Johnson, a well-known local author and contributing writer to Indian River Magazine, fell in love and married again after his wife, Katharine, died. It was in the Painted Bunting house that he proposed to his new wife, Tommye.

A reimagined home passed on from one generation to the next, eventually got a blessing from its former owner. When the renovation was finished, Johnson told his daughter, “Your mother would have loved it.”

Fields believes that the connection is there, but so is a new quality helping to link past and present. “Before it was a cottage, now it’s a home, it’s our home. There are things I love about it that bring me back, but there are certain aspects that I love that make me think about my family.”

From the time when a young girl visited her grandparents on this same street where their mother had settled before them, to a father handing the home off to his daughter, the family and neighborhood linkage go on. The latest clan now taking up residence in Riomar, on Painted Bunting, bears the torch and welds the family to the place, with a nearly 90-year history of living on this street and possibly, for future generations yet to come. 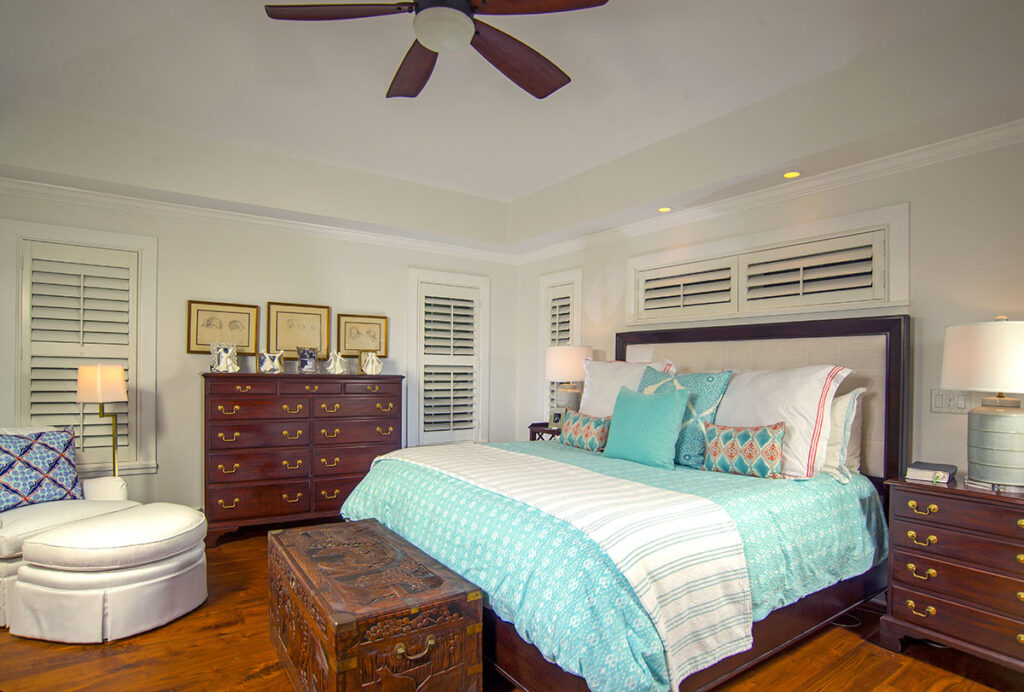 The master bedroom is where Kit Fields’ mother’s art studio once was. The chest at the foot of the bed belonged to Fields’ great-grandmother, who came to Painted Bunting in the 1930s. ROB DOWNEY 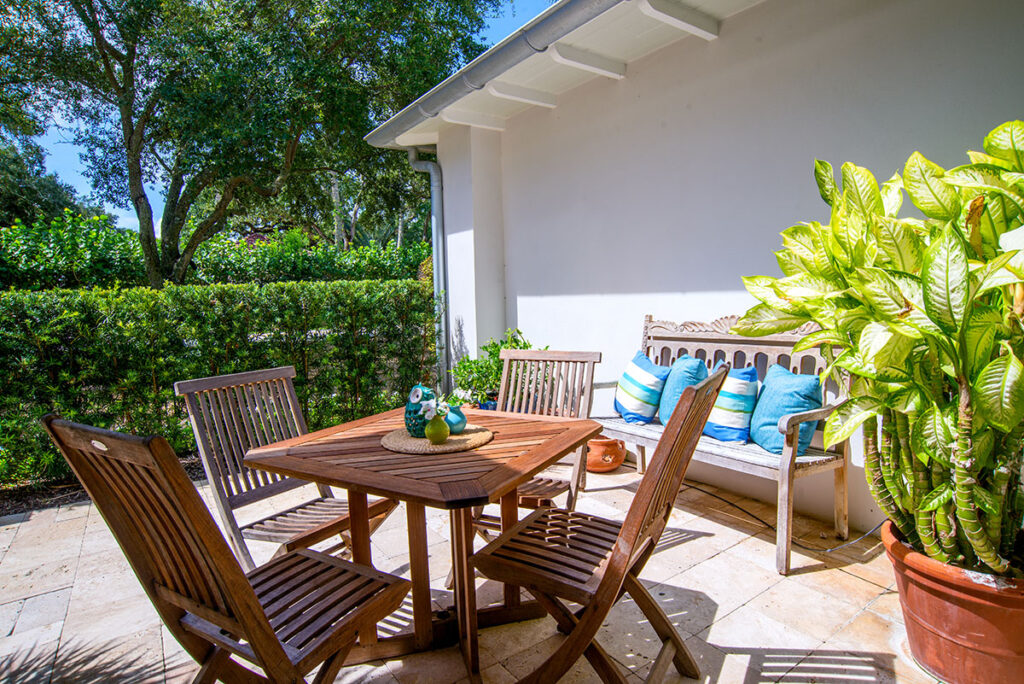 Covered and uncovered outdoor space allows the family to completely enjoy Florida life with the smell and sounds of the surf from the beach nearby. ROB DOWNEY 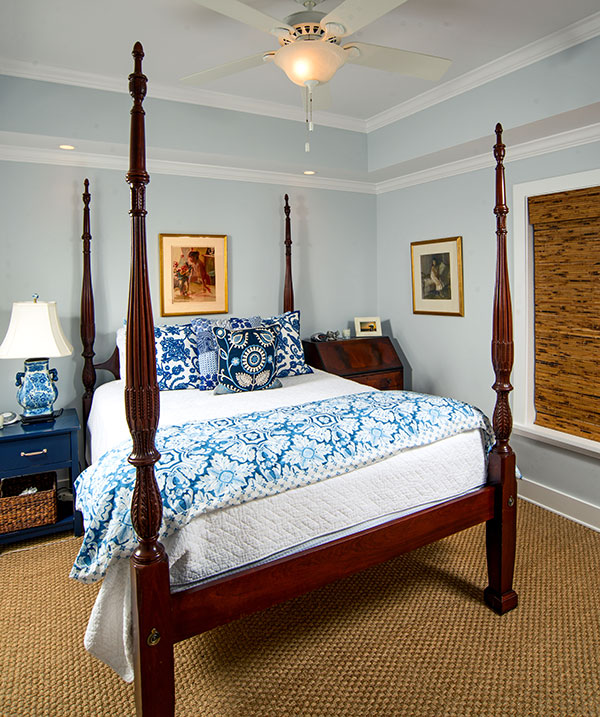 A guest room on one side of the house is where the original master bedroom used to be. The secretary alongside the bed is one of many that Kit Fields brought home from England. ROB DOWNEY 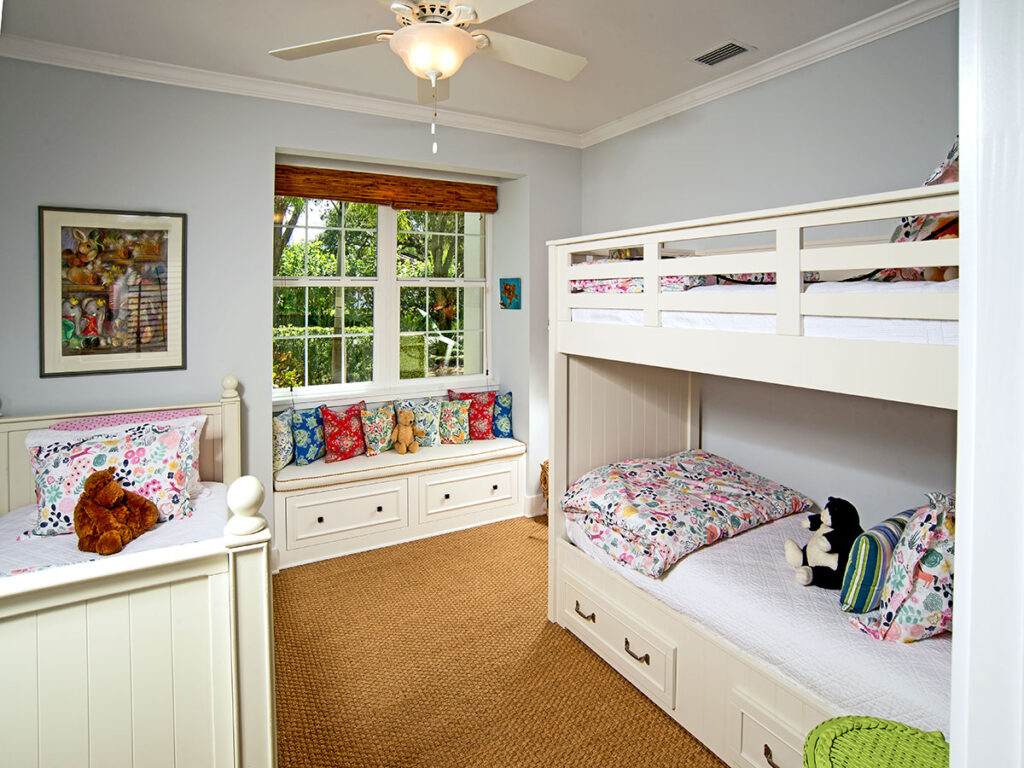 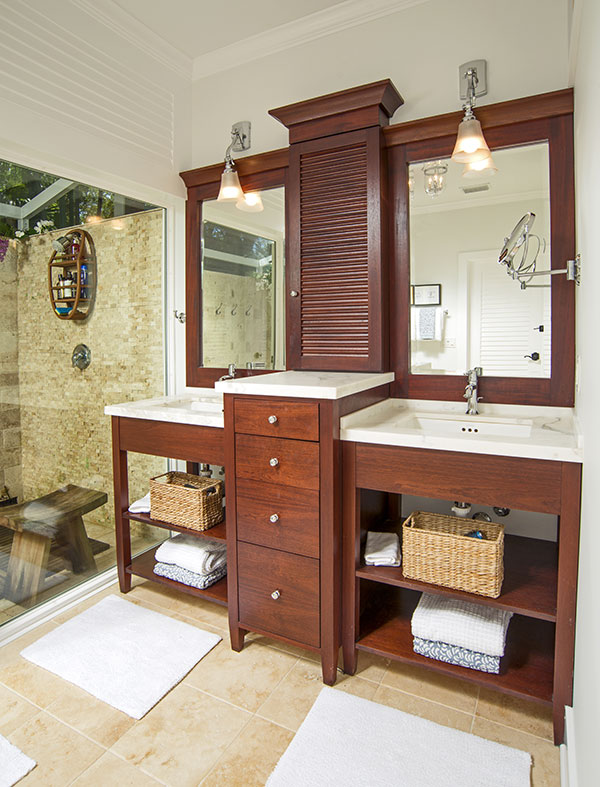 The master bath maintains the indoor/outdoor feel of the entire house. ROB DOWNEY 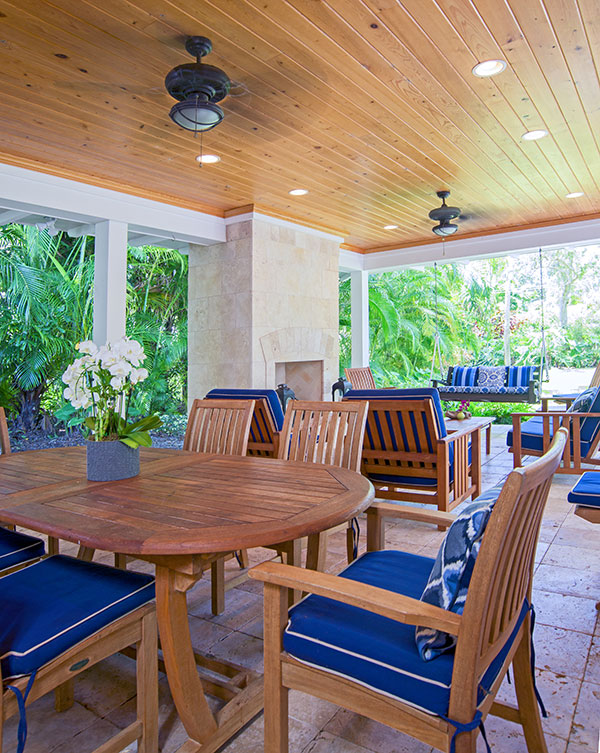 Roseland is passionate about the usefulness of an outdoor fireplace to warm the occasional crisp winter night and dine alfresco. ROB DOWNEY 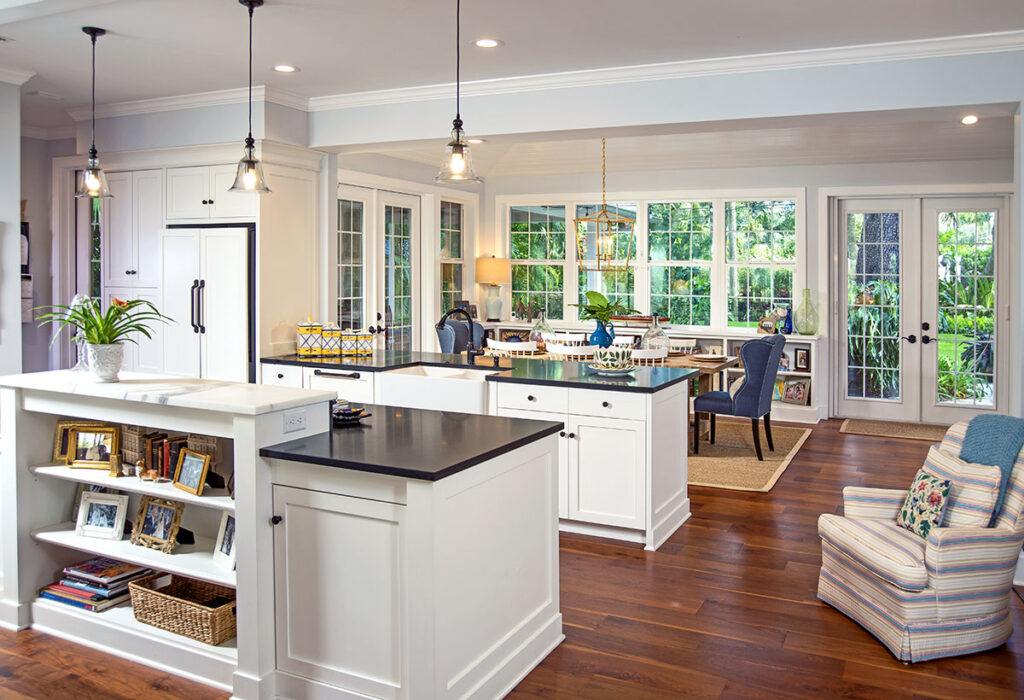 Roseland created an L-shaped kitchen, opening up the adjacent rooms and placing the kitchen at the center of any gathering. ROB DOWNEY
Please follow and like us: