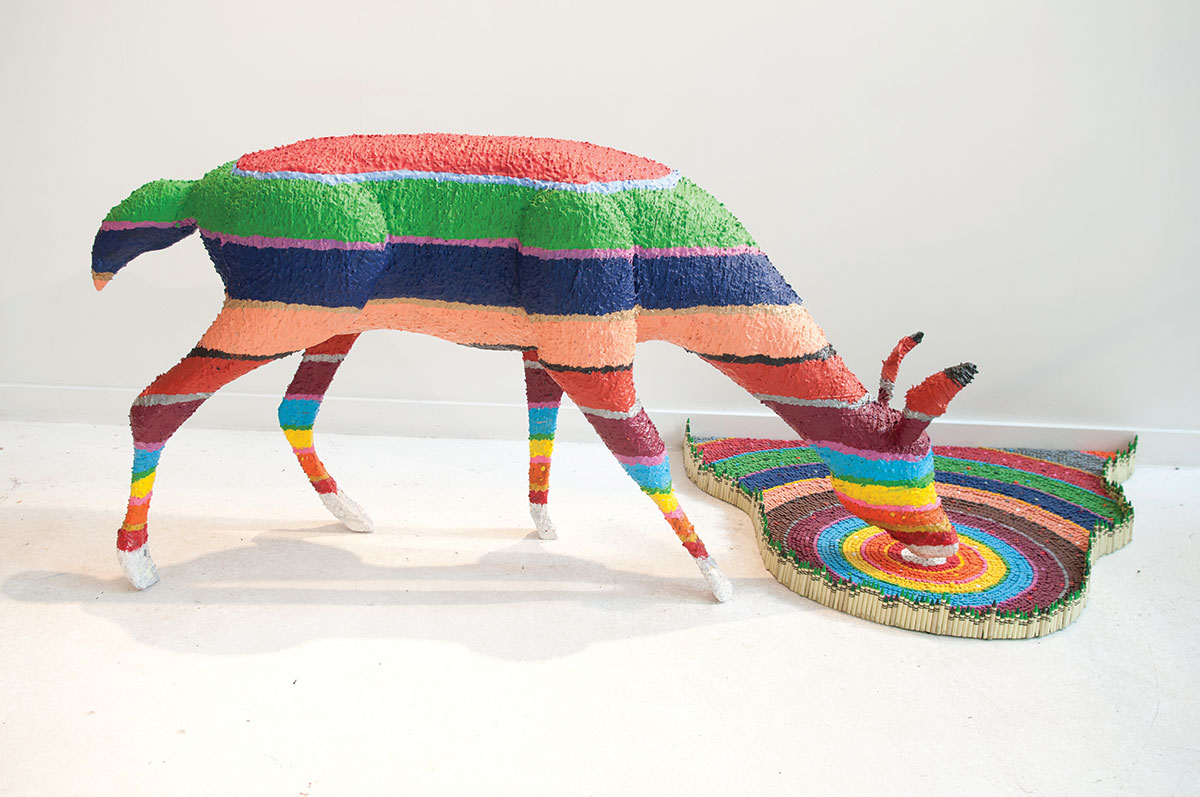 Nashville sculptor Herb Williams’ work made from hundred of thousands of Crayola Crayons is the premier exhibition, Wax Menagerie at the Backus Museum and Gallery. His sculptural subjects include a multihued deer drinking as shown in Ripple Effect. The show runs from March 17 through May 5.

Renowned sculptor waxes on about his unusual medium

Nashville sculptor Herb Williams has spent the last 15 years playing with crayons, but not in the way you would imagine. His sculptural medium is the iconic Crayola Crayon, that paper-wrapped stick of pigment and wax that is the first artistic tool of every child.

But instead of putting crayon to paper, he uses actual Crayola Crayons — thousands of them — to make eye-popping, three-dimensional sculptures of everything from a life-size Marilyn Monroe to forest creatures and fish. His internationally renowned works will be on display at the A.E. Backus Museum and Gallery for its premiere exhibition, Wax Menagerie, beginning March 17.

The fact that Williams’ sculptures consist of Crayolas, the 1903 invention of Edwin Binney who figured prominently in the early history of Fort Pierce, is not lost on the artist or the museum.

Sponsoring the exhibition are Fort Pierce residents Jack and Sally Chapman, who is the great-granddaughter of Binney.

“That’s is a lot of speculation on my part, but I think he would be thrilled to death to see his product used in a whole new way in the art world,” says Chapman when asked what her great-grandfather might think of the creations.

Williams is equally enthralled by the kismet. “I love the irony of it. When they told me the connection, I was floored. It makes perfect sense,” he says.

Georgina (George) Love, who is the museum’s exhibition coordinator, says she learned of Williams’ sculptures through an online arts newsletter and immediately realized that they would be a perfect fit for the museum. Independently, Williams had also become friends with the Chapmans’ son, Steve, who also lives in Nashville after he had visited the artist’s studio several years ago.

“It was fortuitous,” says Love. “The Binneys were patrons of Backus and we had in our last year’s Tribute to Backus show a work he did in crayon of the Binneys’ house, so it is now full circle.”

Williams, 42, did not come by his out-of-the box sculptural medium easily, though.

He grew up in Montgomery, Ala., and at age 7, his father was killed helping to rescue a friend. “We lived in very modest means,” he remembers, but he always wanted to be an artist. “I was that poor little child that carried dozens of broken crayons I kept in a fruitcake tin wherever I went.”

He earned his Bachelor of Fine Arts in sculpture from Birmingham-Southern College. Determined to be a sculptor, he says he played with different media, even working at a bronze foundry in West Palm Beach where he was involved in casting the final piece by hyperrealist sculptor Duane Hanson.

After a move to Nashville, Wiliams says, “I got to the point where I just could not find my own style. I was starving, angry and bitter.”

On the verge of giving up, one night he dreamed of a sculpture made of crayons. When he woke up, he sketched it out. At first, he used generic crayons and even tried molding his own.

He notes that there is a disconnect between the saturated color of the Crayola and what it transfers to paper. He wanted to capture that bright, pure color stick of color.

Since his sculptures require about nine Crayolas per square inch, it did not take long for Williams to realize that buying them the conventional way was not going to work. After a helpful woman at the Crayola company told him, “Honey, bless your heart, you’re buying more Crayolas than a Wal-Mart,” he began purchasing them in bulk — 50-pound boxes that hold 3,000 of a single color in the 120 colors the company makes.

He makes molds of fiberglass or wood and affixes the Crayolas to the surface with an archival quality adhesive, but finding the method to accomplish that was also difficult.

It was another Nashville sculptor who opened his eyes. “I was watching my friend, Red Grooms, using a hot glue gun and if he can do it, it gives it some legitimacy,” he says. Grooms is known for his mixed media installations and his work is found in the Museum of Modern Art and the Metropolitan Museum of Art, among others.

Behind the playfulness of his work is a message, but Williams is not one to preach.

“The crayon is the threshold for them to step over,” he says. “It takes a lot to capture someone’s attention and I don’t want to do art that is stuffy and full of itself. I want it to have joy and a sense of humor, even if there is a deeper meaning.” One piece he just finished is of a map of the United States using the spectrum of red, blue and purple Crayolas. Three of his works are in the permanent collection of the White House.

Williams says he finds inspiration wherever he goes. He was in Shanghai for an exhibition when he saw a woman dressed in white stepping out of the Hermes store with a Standard Poodle that had been shaved, painted and cut to look like a Bengal tiger on a diamond-studded leash.

That led him to explore the animal kingdom with his Call of the Wild series that includes a rainbow-hued deer. His latest series is the Call of Couture that features dogs emblazoned with Burberry plaid and Chanel logos.

Another of his sculptures, done for an event for the City of Nashville that celebrated the release of the Sports Illustrated swimsuit issue there, involved creating a 6-foot by 8-foot rendition of the bikini-clad model using 250,000 individual Crayolas. That piece will be on display at the Backus Museum.

Usually, his pieces need to be indoors because of the delicate nature of the Crayola, but he designed one specifically to melt. To bring awareness to the destructive force of wildfires, he create a group of 8-foot high flames that began to change shape in the Texas sun where they were installed outside the Lubbock Ranging Heritage Center.

If the viewer is entranced by the pure color of the pieces, there are also other senses working as well. For one thing, that distinctive smell of the Crayola has an immediate nostalgic effect on viewers.

“Everyone remembers that smell when you have just opened that brand new box of 64,” he says.

For another, people want to touch them, and he says he feels a piece is successful if that is the viewers’ first inclination. “Sometimes, I will make plexi-boxes for a sculpture if it is going to be on display, but that is the good thing about owning one — you can touch it.”

Lately, Williams has been involved in making street art, spray-painting murals at places like the Wynwood Arts District in Miami. As part of the Backus exhibition, Williams will be painting a mural on the building’s north wall on Saturday and Sunday, March 18 and 19. Viewers are invited to come and observe as the mural takes shape.

But Williams says he will always come back to his first love, the Crayola, a love he has passed along to his daughter, Maggie, 12, and son, Clay, 9.

When Maggie was born, he says, he filled tubs of one of his favorite colors, Carnation Pink, and photographed his daughter covered in Crayolas.

The exhibition runs through May 5.