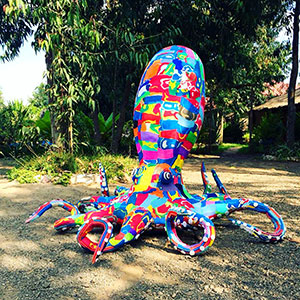 Immerse yourself in the green beauty of McKee Botanical Garden in Vero Beach. Follow its winding paths to the enormous bamboo pavilion. Relish the flicker of sun and shade as you walk, keeping your eye out for surprises alongside the path.

The garden has a long history behind it. It opened in 1932 as McKee Jungle Gardens and attracted more than 100,000 tourists a year. Eventually it became McKee Botanical Garden, with an outstanding collection of waterlilies, native plants, tropical plants, ponds, streams and trails.

Two features, the Hall of Giants and the Spanish Kitchen, were restored meticulously to the way they looked when co-founders Waldo E. Sexton and Arthur G. McKee opened McKee Jungle Gardens.

The garden has been written up in numerous national publications including National Geographic Traveler. It is listed on the National Register of Historic Places and endorsed by The Garden Conservancy as a project of national significance.

McKee always has something new for visitors to enjoy. This year, two very unusual exhibits are on tap. The first is Ocean Sole Sculpture, 40 brightly colored whimsical marine creatures created by artisans in Kenya. They are made of pieces of discarded flip-flops that were cleaned and cut into pieces and then assembled into starfish, an octopus, a sea turtle, a shark and lots more.

The second is Stickwork, first seen at the Garden in 2016. Patrick Dougherty will build a structure from flexible willow branches harvested from a farm in upstate New York. 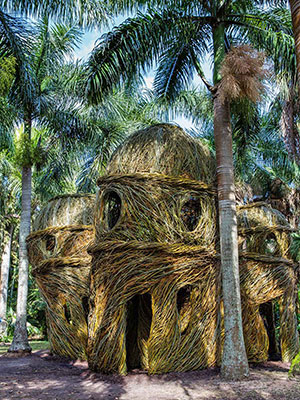