A legacy of family and faith 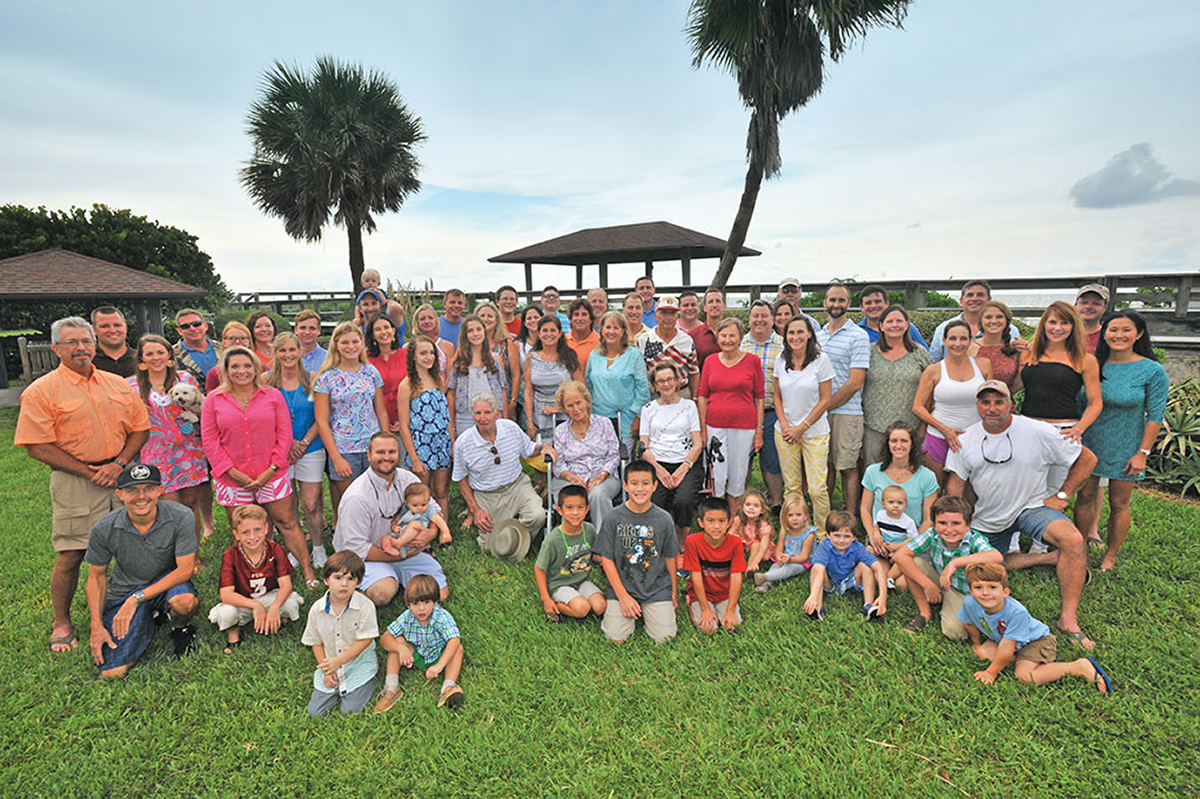 This is just a portion of today’s Schlitt family of Vero Beach. Here, the family members stand at Jaycee Park, which the Schlitts helped build.

It’s a catchy family motto that embodies the numerous branches of the Schlitt family that reach into every facet of the community. Since 1918, the Schlitts have worked, played and supported Vero Beach.

More than 100 members of the entrepreneurial family live in Indian River County, and if they’re old enough to work, they probably have some kind of business related to the home industry. Their names grace buildings, are signed on thousands of architectural blueprints and appear as signatures on checks that make things happen. Many Vero residents have dealt with a Schlitt, even if the name was Barth, St. Pierre, Gonzalez or others.

THE ROOTS
The family tree begins in Germany with the Schlitts and the Millers. The families both came to the United States in the mid-1800s; the Schlitt branch became farmers in Missouri and the Millers settled in neighboring Illinois. In 1918, Ludwig (Louis) Schlitt moved his family to Vero Beach because his wife Mary (Anna) had respiratory problems and needed a warmer climate.

Louis and Anna had six children: Christine, John, Leo, Alphonse, Cornelius (Corny) and Alma. At the time of the move south, John and Leo served in the U.S. Army during World War I, but they joined the family after the war.

The Schlitts came as farmers, but their Catholic faith, strong work ethic and a deep belief in service to others dominates the family history and have established many important firsts for Vero Beach.

John started Schlitt Brothers Painting with his brothers Leo and Corny in Vero in 1921. John passed the business to his son Frank who passed it to Richard and now Richard’s son Paul has joined him to continue the legacy of his great grandfather.

The first Catholic Mass was held at Louis and Anna’s home on 22nd Avenue in June 1919, soon after St. Helen’s began construction. Cornelius built the first trailer park — Schlitt’s Trailer Park & Texaco. Florine Schlitt Martin was the first female bank teller with Indian River Bank. Florence Schlitt started Sunshine Physical Therapy with Bill Graves. Ed Schlitt helped build the first condominium in Vero (Ocean Chateau). Bob Schlitt was the first charter Grand Knight for the Knights of Columbus. The Schlitts provided much of the volunteer labor for the building of Jaycee Park and John Schlitt designed Bethel Creek House. Many members of the family were instrumental in beginning the first Harvest Festival and remain very involved to this day.

For the Heritage Center’s Pioneer Dinner honoring the Schlitts, family members were asked to place push pins on an Indian River map to mark each of the Schlitt development properties. The quantity of work amassed over a span of 60 years is amazing, a testament to their reach in the community.

The hands of the hard-working entrepreneurial family are everywhere and they helped change the face and feel of the county.

MEMORIES OF FLORENCE
Florence Miller married John Schlitt (son of Louis) in 1923. They were one of the more active family branches in Vero Beach and parents of Florine, Frank, Edgar (Ed), Dolores, Jean, John, Louis and Robert.

Barth Construction owner Phil Barth (son of Dolores Schlitt) says that so much of the reason the family has retained its connection comes from their grandmother Florence.

“She was an only child and did not like that very much,” says Barth. “She wanted to fill her house with children, so she had eight of them and they had a lot of children too.”

Florence’s house was constantly active and she stayed fully involved even in later years by making each grandchild feel treasured with individual luncheons for birthdays and gifts for every child at Christmas. She also started the tradition of an annual Easter egg hunt that continues today with a short hiatus until Barbara Schlitt Ford took it up again.

Barth says his grandmother actually gave him his first tutorial in money management. “She took me to the A&P one day and I spied a penny candy machine. I asked her if the dime I had would work to get me a gum ball and she told me ‘no.’ I took my dime over and put it in and out popped a gum ball. When I proudly told her that it did work, that is when she gave me my first lesson in economics,” says Barth laughingly.

“She filled plastic eggs with slips of paper which were redeemable for change,” says Schlitt Ford. “Some of the more mischievous boys would ‘recycle’ the slips she threw out and turn them in again. She was always confused about why she ran out of money.”

THE FAMILY CONNECTION
The family keeps in touch constantly through work and play, even vacationing together or working as business partners.

“We do not use family exclusively but we do always try to have them be in the mix if possible,” says Barth.

Many have family-owned businesses in insurance, electrical, family planning, real estate sales, real estate law, interior design, accounting and construction, which they have built and passed on to the next generation. The entrepreneurial spirit that began when the families made the adventurous trek from Germany to America in the mid-1800s for a better life was continued when Louis and Anna moved in 1918 from Missouri to the then sparsely settled area that is now known as Vero Beach. Their children joined them and they carried with them a spirit of self-reliance and independence that continues to be passed down to their offspring. Many Schlitt teens began by working for their Uncle Frank at Schlitt Brothers Painting before branching out to other home or construction-related businesses of their own.

“It’s really great that when you have a question on almost anything there is someone in the family who you can pick up the phone and call,” says Schlitt Ford. She works with siblings Steve Schlitt and Linda Schlitt Gonzalez as well as other family members — Andrew and Melanie Gonzalez, Joseph Schlitt and Joseph O’Neill — at Coldwell Banker Paradise Real Estate. Their father, Ed Schlitt, first established the real estate firm as Ed Schlitt Realtors. Schlitt Gonzalez says she feels a sense of responsibility for the community which she got from her father who served on many economic, zoning and business committees.

“He had a vision to keep Vero more like old Florida and worked to reduce building densities, height limits, encourage cooperation between development companies and various government planning divisions and much more,” says Schlitt Gonzalez.

EXTENDING THE FAMILY
Many of their annual family reunions were at Florence and John’s homestead but as the family grew, necessity kept them moving around. Currently, the family Easter egg hunt is held at Schlitt Ford’s Vero Lago clubhouse and the Thanksgiving FSU/UF Rivalry reunion is a block party in McAnsh Park where even the neighbors show up.

Bob Sr. and his wife JoAnn had nine children yet took in more than 400 foster kids for temporary emergency housing or longer. At first they took in a neighbor’s child in need, and then five more followed. “Other kids brought home stray dogs and cats but ours brought kids whose parents were not there for them,” explains JoAnn.

Eventually a social worker “drafted” them officially for the State of Florida because no one else was willing to take in teens.

Now, many of those foster kids come to the reunions each year bringing their own families, and enjoy a Christmas trip together every other year. Bob says his extended family filled up more than half the cabins at Silver Springs last year.

“My mother would drive all of us back and forth to school, game practices and church activities so much that she used to say she sometimes thought she saw herself on the road that day coming and going,” says Dolores Schlitt Barth laughing. “There were so many of us that half the church congregation was either related by blood or marriage.”

Their community involvement is evidence of their belief in being of service to others. The list of charitable organizations they either founded or volunteer with is astounding: Future Builders of America, St. Helen’s Harvest Festival, Youth Guidance, Youth on a Mission, Habitat for Humanity, Visiting Nurses Association, Boy Scouts of America, Exchange Club, Pilot Club, Substance Recovery Community, Jaycees, United Way, and more.

THE SCHLITT DIFFERENCE
Many large families suffer from in-fighting because of ego or jealousy. Not the Schlitts. “No one is out there trying to be anybody else but themselves,” says Craig Schlitt. “I went to school with most of my cousins, and all of us cannot wait to get together since we really do care about and enjoy being with each other.”

That is a good thing since in the course of a day it would be almost impossible to avoid at least one family relation.

“Home, family and faith are our key values and we all have a good German work ethic,” says Schlitt Ford. “We have a great love of community and an appreciation for being able to raise our families here.”