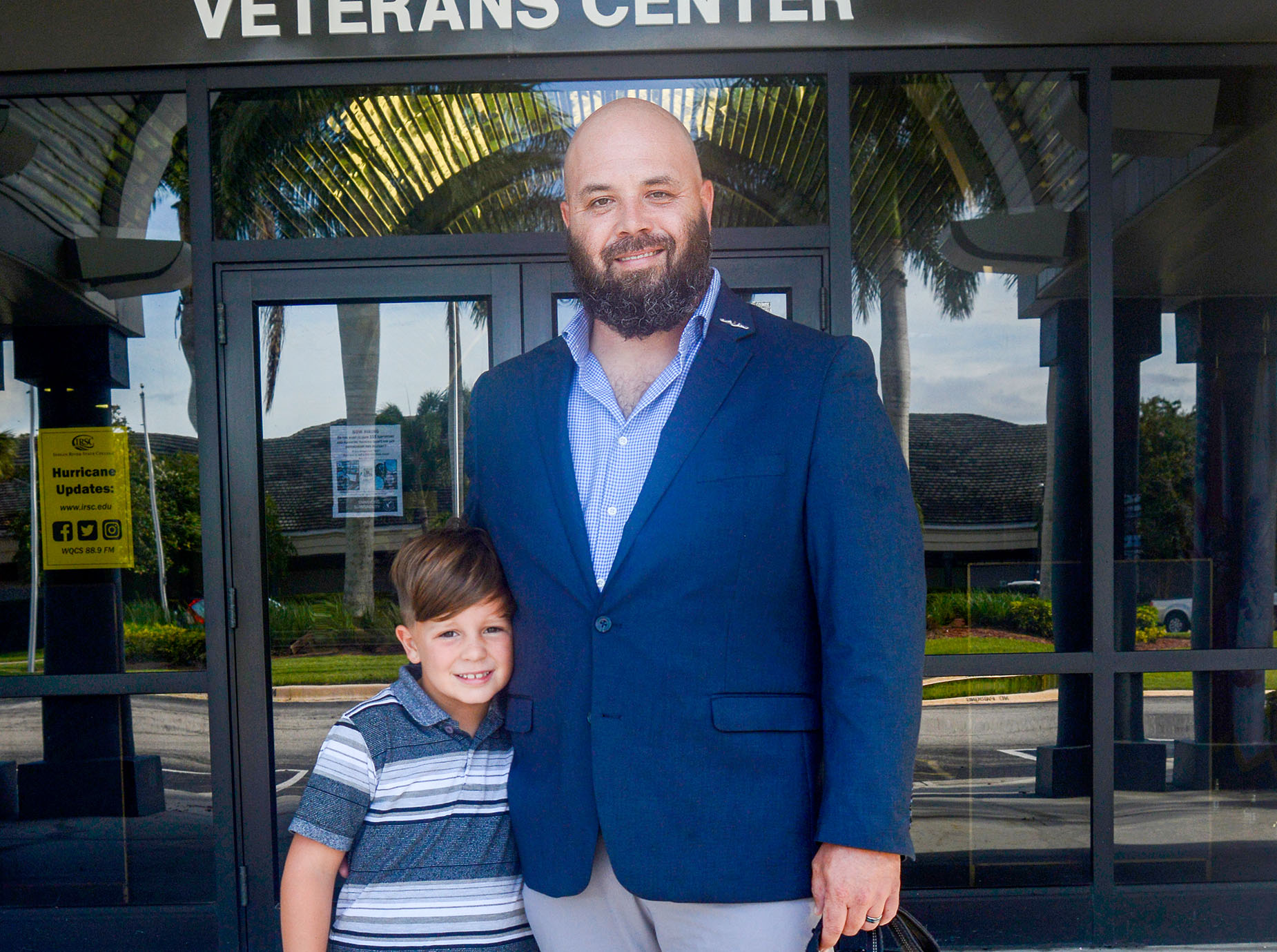 Jordan Kahle was born at the Naval Submarine Base in Groton, Connecticut, but his father’s postings kept the family moving.

Three years in the Melbourne/Palm Bay area was long enough for high school — the longest stretch he’d lived at one address.

A single dad since Jordan was young, his father playfully called him Nub, Navy slang for a new crewmember, a non-useful body. One night, he sat the boy down inside the radio room of his sub.

“He said not to touch anything but as soon as he walked out, my fingers were on every button and switch in the place,” Kahle says.

At Melbourne High School, Kahle was in “every club there was” — National Honor Society, Beta Club, Key Club — and also Junior Reserve Officers’ Training Corps. He volunteered at a soup kitchen, receiving a Golden Rule award from President Bill Clinton.

Although nominated by Sen. Connie Mack, Kahle did not get a U.S. Naval Academy appointment, attending Rensselaer Polytechnic Institute in Troy, New York, on a U.S. Army scholarship instead. When he learned that he would be assigned to light infantry in Bosnia, however, he rescinded his scholarship and enlisted in the Navy.

Kahle earned the highest GPA in his class, learning signals, flags, knots, insignia and swimming while marching everywhere. Once he was stationed on a submarine, and he remembered certain lifesaving drills as comical.

“If something goes wrong that deep down, there’s a good chance you won’t live.”

He almost didn’t get on a sub at all.

Kahle’s contract gave him a submarine designation ifhe was medically qualified, but he was assigned to an aircraft carrier.

“I’d already spent a year and a half at nuclear propulsion training school [informally called prototype],” he explains. “I called Dad. I called my Uncle Mike, just retired. ‘Stand your ground,’ he said. I was sure I’d either be laughed out of the master chief’s office or get my ass beat.”

Kahle respectfully presented his logic: He was medically qualified. Unless he was reassigned, the Navy was in breach.

“I sweated bullets while the master chief conferred with others for what seemed like hours. In the end, he said, ‘What sub do you want?’ ”

During his first two years after basic, Kahle spent 600 days at sea. He crossed the Arctic Circle 11 times and saw the world — France, Crete, Bahrain, Dubai — but living conditions were challenging. Hot racking refers to a three sailors-to-two beds ratio, with one rotating off in six-hour shifts.

Later, as chief, conditions improved but even then, “You’d get yelled at if you showered longer than three minutes.”

Kahle also taught prototype in South Carolina, where he met his wife.

After injuring his shoulder while stationed on his submarine, he was treated with surgery, therapy and injections. Preparation for an upcoming deployment required a more thorough medical examination.

“The last thing you want is to have to do a medical evacuation during a mission.”

The exam not only changed his plans, but also his life. Expecting another shot, Kahle was placed on light duty.

“I couldn’t deploy with my guys,” he says. “It was depressing, demoralizing.”

Eventually, Kahle was medically separated from the Navy. After a stint with Naval Legal Services, Kahle transferred to the Florida Department of Veterans’ Affairs employment team for the Treasure Coast.

Kahle also put his nuclear capabilities to work for area power companies but currently works to empower individuals and businesses. He’s a Six Sigma black belt [the organization teaches techniques for process improvement], an equity partner with Rock You Academy — a panel of experts helping others succeed — and also owns 4DV’s Consulting, a team of disabled veterans that identifies gaps in excellence and areas of waste or inefficiency for businesses.

“Sometimes the lowest person on the totem pole can save a company. You have to listen; what bothers an employee impacts your bottom line,” Kahle says.

One of Kahle’s mentors was the late Senior Chief Ron Zimmerman who encouraged veterans to figure out “how to serve, after their service.” In that spirit, Kahle volunteers with several nonprofit organizations.

As president of T.C. Sandlot, an organization that teaches kids to play — and love — baseball, he says, “We focus on the fundamentals but break into sandlot-style teams and let kids be kids. Some of them have never played; some love it but can’t afford league fees.”

One of the projects Kahle is passionate about is Stabilize Revitalize Fort Pierce, patterned on the 30-year success of Detroit Blight Busters, a group revitalizing that city. And before his death in May, Zimmerman gave his blessing to the formation of a foundation in his name.

“Many veterans organizations don’t know what the others are doing,” Kahle says. “This foundation will create synergies throughout the community and connect the resources.”

Kahle leans down to scratch the ear of his service dog, Nova, as he explains that “trauma is trauma,” whether experienced by children whose environment normalizes guns and gangs or a sailor whose comrade commits suicide.

“My wife is a veteran too. She knows — if a vet calls at two in the morning, I’m gone,” Kahle says. “You have to give back.”

Hobbies: “Every now and then I go fishing. Sometimes I play golf — I’m not good at it.”

Who inspires me: “My wife and children inspire me to be a better human, a better father.”

Something most people don’t know about me: “I’ve lived a good chunk of my life under the ocean’s surface.”