Kathi and Gene Sandburg stood back and looked at their new 2,435-square-foot home neatly sitting on their new lot and were overcome with emotion. Their son, Brendon, they were sure, was looking down on them with a big smile on his face.

“We’re so grateful,” Gene Sandburg said. “It’s overwhelming that Port St. Lucie and GL Homes gave us this beautiful home. I think this is Brendon’s way of taking care of us.”

Brendon Sandburg was a petty officer and naval hospital corpsman, who was assigned to Branch Medical Clinic in Yuma, Arizona, when he died in a search and rescue helicopter training exercise on Aug. 16, 2007. He was just 25.

The Sandburgs are now a Gold Star family — a designation given to close family members of a person who died in military service.

Brendon’s daughter, who was just 18 months old when he died, lives in Tennessee.

“She has big blue eyes and a great smile,” Kathi Sandburg said. “She’s a combination of the best of her mom and dad.”

The Sandburgs, both retired, have two other sons, Jeremy, 43, in Oregon, and Garrett, 37, who lives locally. The boys grew up in Stuart. Brendon graduated in 2000 from John Carroll High School in Fort Pierce.

Port St. Lucie honors Gold Star families who meet selection criteria with a mortgage payment-free home and lot. The Sandburgs’ two-bedroom, two-bath home on Inagua Street in the Woodland Trails neighborhood was built by GL Homes and furnished and decorated by the Believe With Me Foundation.

The Sandburgs are the second Gold Star family to receive a home from Port St. Lucie. The first, in the program’s 2020-21 inaugural year, was the Heintz family, whose home is two doors down from the Sandburgs.

Air Force Senior Airman Joshua Allen Reinwasser died as a result of exposure to chemicals that severely damaged his lungs while deployed to Guam and Qatar. Synergy Homes built the home for Lisa Heintz and sons Dierk and Dominik to honor Reinwasser.

Inside the Sandburgs’ new home, Brendon, of course, has the place of honor. On an ornate marble-topped side table a memorial flag is displayed in a triangular frame with a picture of him in his white uniform in the middle. A tall white orchid plant stands next to it. His mother paused, one hand on the table, to look at it.

The Sandburgs happily led a tour through the house for local officials and well-wishers. The tour followed a brief outdoor ceremony at which the Navy Sea Cadets Color Guard presented the colors and the Vietnam Veterans of America Chapter 566 raised a flag donated by Councilman David Pickett, a veteran himself.

The home’s furnishings are at once comfortable and elegant, with a bouquet of soothing colors throughout. A plate of cookies for the visitors sat on the marble countertop in the kitchen.

“The Believe With Me Foundation did an amazing job,” Kathi Sandburg said. The foundation is a nonprofit organization that assists Gold Star families financially and through their volunteers.

Family photos adorn various surfaces, including one of the photo scrapbooks Kathi is fond of making from time to time. Large, beautifully framed prints hang on the walls. One, behind Brendon’s memorial flag, is of small boats tied up along the waterfront of a city — perhaps reminiscent of the family’s life in Stuart.

Ryan Courson, GL Homes division president of St. Lucie County, said the company got involved when the city reached out to area home builders asking how they could help with the project. After thinking it over, GL Homes concluded that they wanted to build the entire home, which includes a den and a two-car garage. They consulted with the Sandburgs to customize it to their liking.

“It took about four months to work out the details of the contract with the city,” Courson said.

The lot had to be cleared — something GL doesn’t normally do because it owns the land it builds on in the 4,000-acre Riverland master-planned project south of Tradition.

Valencia Cay and Valencia Grove are two Riverland communities it has built so far and the company is working on a third, Valencia Walk. Riverland is north of Becker Road, south of Village Parkway and Tradition and west of I-95. GL Homes started building in the city in 2018.

“It was very rewarding for us to work on their home,” Courson said. “It is a noble cause and a chance to give back to this family for their sacrifice. It was great to see their smiles and excitement; just so very rewarding.”

After discussing the design and details with the Sandburgs, it took about 12 weeks to build the house.

“We wanted to make it feel like home,” he said.

They succeeded — Kathi Sandburg said it was so complete that “all I needed was my clothes and toothbrush.” 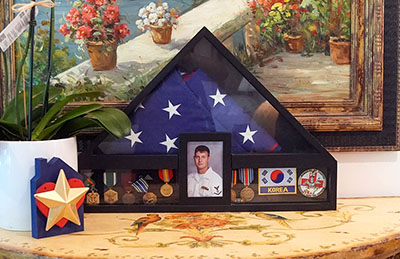