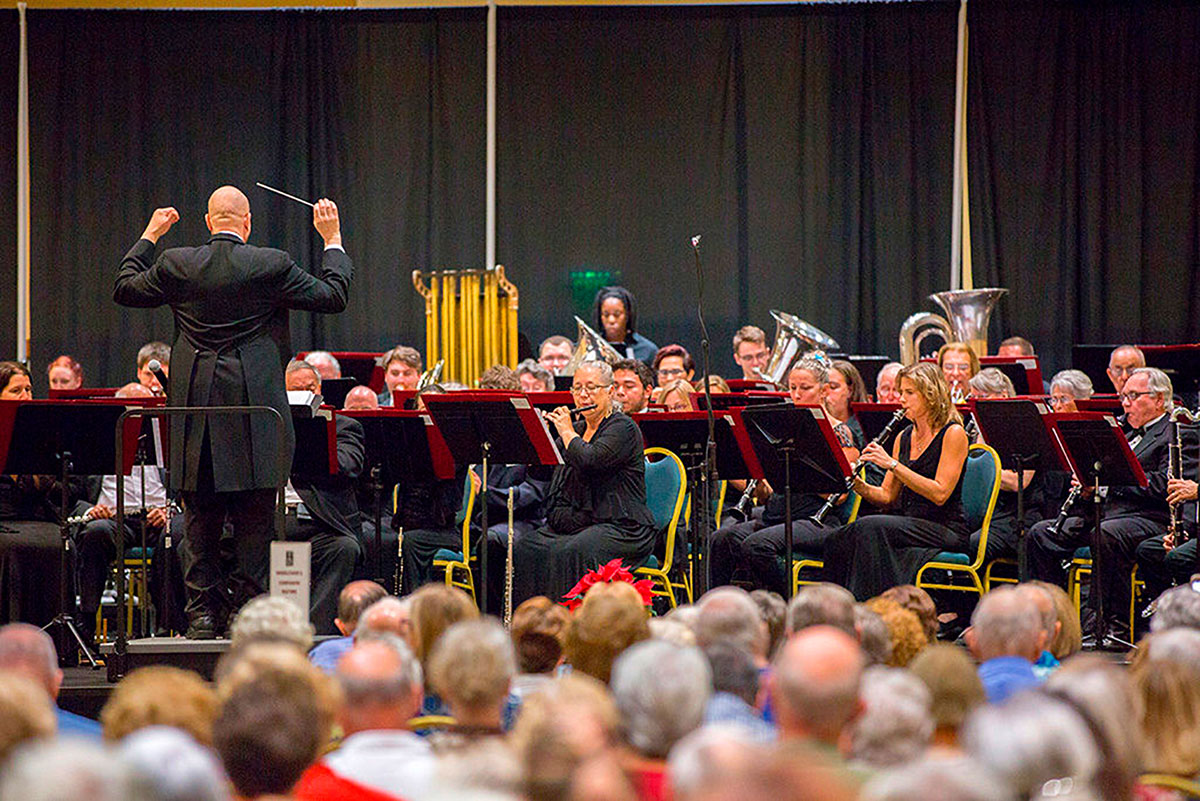 The Port St. Lucie Community Band rehearses weekly, and performs throughout the year, primarily at the Port St. Lucie Civic Center. The band was founded in 1989 by local musicians who had the support of area businesses and encouragement of city officials. PORT ST. LUCIE COMMUNITY BAND PHOTO

An evening with the Port St. Lucie Community Band on its 30th anniversary

Anything that brings people of all races, ages and backgrounds together is a good thing. When it includes entertainment for all, it’s a great thing. Port St. Lucie Community Band is a wonderful example, whether young or old, bald or blue-streaked. The band personifies “community” as it celebrates 30 years of entertaining the public.

Conductor John K. Southall, Ph.D. is also the music director at Indian River State College, president of the Florida Music Educators’ Association and past medal recipient for excellence in music education. Under his leadership the band combines the talents of middle school and high school students, adults from all walks of life, retirees and snowbirds. Arriving a bit late for rehearsal, just in from a conference in Dallas, he apologizes. “This is my heart and soul,” he says. The mutual affection between conductor and band is evident.

Donald Van Harken is a retired pharmaceutical research scientist from Syracuse, New York, who has played clarinet since grammar school. Since 2009, he’s played with Port St. Lucie Community Band. Woodwind specialist Diane Battista is a former music teacher who plays with a summer concert band at home in Utica, New York. Six years ago, Cynthia Humphrey, a former CPA office manager, went online to find local music groups and found the band. She also takes part in a Connecticut band, playing clarinet during summers. “You need to talk to Andre!” she says. “He comes from the furthest away.”

Andre Bernier hails from Sherbrooke, Quebec, and met his wife of 42 years through music; she is a pianist. The retired electronics teacher plays tenor and alto sax, not only with the Community Band but also with one of its offshoots, the Ambassadors of Swing, and another group in Vero.

Okeechobee High School junior Makaya Whitehead is 16 and has been playing the trumpet since seventh grade. Driving 45 minutes each way, she brought schoolmates Derrick Chen and Ethan Adabo. Talented musicians, they wanted something more challenging; being part of the Port St. Lucie Community Band is like taking a college music course.

Flutist David Mook lives in Fort Pierce. A former oceanographer and geologist, Mook taught at Barry University. “I started playing in grade school and later took a hiatus because of work.” Enjoying retirement and travels, he is a long-time member of the band. “I’ve been with the band since the earth cooled,” he jokes.

FAMILY GATHERING
Supported by grants and ticket sales, the band is a non-profit organization; donations are tax-deductible. There are about 70 members of the band; others come and go. “It’s like a big family,” says band president Pat Vaida, welcoming a member back for the winter, then introducing the newest musicians and guests. The retired teacher’s aide also serves as the band’s librarian.

As everyone is seated, the room fills with scales and arpeggios as musicians warm up their instruments, arrange music and check cellphones before rehearsal officially begins. As Southall takes his place at his music stand, he chats. “Why do we warm up with chorales?” Southall asks. “We have to warm up body, brain and instrument. Now repeat and adjust for pitch.”

A family atmosphere pervades rehearsals. Southall’s grandson listens from a stroller, occasionally joining Grandpa at his music stand. Southall keeps a friendly, teasing banter going throughout rehearsal. “In the education world, you have to be positive,” he says. Musical numbers are punctuated with instruction. “Air ... air! You’re not following me, trombones ... Did I say something funny? ... Lisa, do you want me to send you to your room for a time out? Good!”

Preparing for an upcoming Christmas concert, the first piece receives praise. “Good first read. It will be fine.” The next gets a slightly less enthusiastic response. “Your playing resembled that piece. I think I know it.” He’d had a nightmare recently about a specific piece of music. “I have a list of what I’ll never do again, and that one’s at the top.” Referring to the next title, he quips, “‘It’s the Most Wonderful Time of the Year’ when we rehearse for this concert.”

Southall shouts good-naturedly over the music, “You’re sharp, trombones, and I don’t mean that you’re snappy dressers. Now, where’s my master sleigh bell player? What qualifies you, anyway? Did you train with Santa? They call him the Master Sleigh-er.” After one number, Southall’s grandson cries in the relative quiet. “That’s right, Ollie. I was screaming inside the whole time, too, because the seconds and thirds were playing so sharp.” After an hour, he announces a break. “Be back in six minutes and 22-and-a-half seconds.”

Vaida puts down her trumpet to tend to librarian duties. “Most of our concerts are at the Port St. Lucie Civic Center,” she says as she sifts through music folders. Occasionally, they’re asked to perform at other venues. Once in a while, they have a combination concert with IRSC’s band. Several IRSC students double as members of the band.

FRIENDLY CHATS
Band members mill around the room during the break, telling jokes or introducing themselves to newbies. The percussionists stay near the back. Port St. Lucie’s Ed Shank recently retired as a music teacher in Connecticut and moved here full-time. His T-shirt gives a sense of his identity: It’s OK, I’m With the Band. During rehearsal, he was joined by newcomer Joseph Feliciano, a 13-year-old student at Southern Oaks Middle School. Side by side, they added musical interest to a rendition of “Sleigh Ride” with bells and the “whip” sound of a wooden slapstick, or took turns playing the xylophone.

During that same number, Port St. Lucie pharmacist Kyle Green took a break from the standard drum set to supply the sound of horses’ hooves clopping down a country road by playing the temple block. Formerly in the Marine Band, he worked with someone who invited him to a rehearsal; he’s been active ever since. “It’s a lot of fun,” he says.

Robert Back is at this particular rehearsal to support his son, Alex, a trombone player at Oak Hammock K-8. Alex didn’t grow up with a love for music, but one day he said he wanted to be in the band. Alex’s band director, Amy Isenhour, is also a member of the Port St. Lucie Community Band; she encouraged him to check it out.

Vaida says the band gladly welcomes newcomers that “we keep getting all the time.” The first step is to make contact via the band’s website (www.pslcommunityband.org), email info@pslcommunityband.org or call 772-807-4488. Musicians are invited to sit in on rehearsals at the McAlpin Fine Arts building on the campus of IRSC in Fort Pierce (3209 Virginia Avenue). Southall decides what parts are best suited for new members. “We’re at different levels,” says Vaida, “so we need experienced musicians to cover all the parts.”

The Port St. Lucie Community Band may be voluntary and friendly, but when it comes to performance, it’s all business. At concerts, the men wear tuxedos while the women dress in all black. The banter stills, now that they are in the public eye. Every motion of the conductor’s wand is crisp and purposeful. The arms raise, and all is quiet as the band takes a collective breath, and ... music.