Spur, the horse in Jon Kral’s iconographic photograph on the cover of his book Cracker: Florida’s Enduring Cowboy, has died at the age of 37.

Kral took the photograph of cowboy George Harrison “Junior’’ Mills atop Spur while Junior was cowboying in 1989. Besides serving as the horse for the storied cowboy Mills and appearing on Kral’s book cover, Spur also helped develop world title holder team steer roper Jessy Remsburg, even after surviving a lightning strike.

Calvin “Buddy’’ Mills, Junior’s son, says Spur on July 19 failed to get up and come in when he called him for his morning feeding at his pasture behind his home in Basinger in Okeechobee County. The horse had been lying down on two other mornings in recent months and Buddy had helped him get up. But when Buddy tried to help the horse up on the 19th, its fetlock joint buckled and the horse fell on Buddy, breaking Buddy’s leg and trapping him underneath.

Buddy eventually pulled himself from beneath the horse and summoned veterinarian Kerry Mcgehee, and the difficult decision was made to euthanize Spur.

Spur, three-quarter quarter horse and one-quarter Arabian, actually began his life as a horse with a different name. Buddy purchased him from John Davis of Okeechobee for $300 as a 3-year-old. “He’d come up and sneak up to you in a pasture, so they called him Ninja,’’ Buddy says.

Buddy had the gelding for a year when he had his dad, who was riding a stud horse and getting up in years, decided to trade. “The stud horse was a handful and I got to worrying about Pop,’’ Buddy says. Ninja, on the other hand, “was dead broke gentle.’’

So gentle, that when Junior began using him for his work as a day cowboy he quickly gave the horse a new name. “He got the name Spur because Pop said, ‘I’ve never rode a horse that I had to spur all day long,’ ’’ Buddy says. “He wasn’t real high strung, and Pop was used to a horse that wanted to go.’’

Junior Mills rode him for more than a decade as he ended his career as a day cowboy at the age of 82 in 2000. Buddy says the horse had tremendous stamina and his dad would work him 5 days a week during hitches lasting as long as 13 weeks at places such as Bright Hour Ranch in Arcadia. Other cowboys, Buddy says, would swap out horses every few days.

Spur knew just the right amount of energy to expend for any task. “That horse just knew how to use his body without using his energy up," Buddy says.

The photograph by Kral of Junior and Spur was taken during a roundup at Homer Wall’s Swamp Ranch in Indiantown. Kral, a Miami Herald photographer at the time, was spending his off time working on a photo book of Florida cowboys. Buddy, who was working with his dad when the photo was taken, says they were driving cattle to the ranch’s pens for annual deworming and vaccinations and identifying bigger calves to go to market.

“Everywhere we went was under water that day,’’ Buddy says. “The marsh was knee deep in most places and some places it was belly deep. There was about 180 head of cows we pushed out of that marsh and held them up in a corner. Once they settled down, we took them across the marsh to a lane.’’

Kral remembers that day, too. It was the first day he had met Junior, with whom he would remain friends until Junior’s death in 2006 at the age of 87. “He was doing day cowboying and I didn’t know that was his horse,’’ says Kral, who had begun shooting photographs while riding alongside his subjects. “At one point, we were working cows, and a calf got loose and Junior took off after that calf going so fast down that pasture I thought, ‘This could be a wreck.’ I couldn’t believe anyone could go that fast on a horse except in a thoroughbred race. He and a cowgirl lassoed that calf and brought it back to the herd. I thought that was a dangerous, heroic thing Junior was doing at his age.’’

Kral says he trained his lens on Junior that day because he was the oldest and most experienced cow hunter working. “He was the epitome of the Florida cracker cowboy,’’ he says. “I didn’t think as much of the horse as I did Junior that day, but when I saw it running that fast and sure-footed in the open field I just thought they were an amazing pair.’’

In choosing Junior and Spur for the cover of his book from the shoot on Swamp Ranch that day, Kral said Junior and the horse were incredibly in synch as they trudged through the swamp together. “To me that photo was the epitome of a real Florida cracker,’’ he says “The horse and Junior had the same posture.’’

Kral, who grew up in Fort Pierce and now lives in Boone, N.C., says he and Junior became such friends that Junior and his wife, Betty, known as “Miss Betty,’’ would often invite him to dinner. When the book was published, Kral would have Junior accompany him at signings. Besides the Cracker book, Kral’s photos of horses have appeared in three other books, Hot Bloods, a behind-the-scenes look at the horse industry in Florida, Saving Leslie Jones, a book on retired thoroughbreds, and a book on Gulfstream Park in Hallandale Beach. Kral, 76, still shoots the Preakness every year.

When Junior quit riding Spur, he was loaned to a young Jessy Remsburg and was kept a pasture in Palm City. Jessy was just learning to team rope and won her first accolades on Spur. Graduating to other horses, she would go on to become a Women’s Pro Rodeo Association World Champion.

During his care under the Remsburgs, lightning struck a pine tree near the Remsburgs’ barn in Palm City and hit Spur. “It knocked him down and out,’’ Buddy says. “They thought he was dead.’’

But the horse soon came to and got up. The only permanent damage the horse suffered was a scar on his neck, and he soon was used again for roping by the Remsburgs.

When the Remsburgs returned him to Buddy after a year and a half, Buddy used him in team roping events at rodeos in which he competed. Now retired, Buddy for 21 years was an agriculture teacher at Yearling Middle School in Okeechobee and rodeo coach for the middle school and Okeechobee County High School.

Buddy retired Spur in 2014, keeping him in a pasture behind his house. “We let him roam free and graze,’’ Buddy says. “He liked the pasture better than staying in the stall.’’

Another horse, Dakota, owned by Buddy’s son, Chad, joined Spur in the pasture in 2016. “That was my geriatric pasture,’’ Buddy says. “Those two horses never had to commingle with younger horses because younger horses tend to be aggravating to older horses. All they had to do was eat twice a day and enjoy the green grass.’’

Buddy says he buried Spur under a favored oak tree in the pasture, where he always walked after being fed. Buddy didn’t know he had broken his leg until the next day, when he visited Vero Beach orthopaedic surgeon Ron Robinson, who had been treating Buddy for a torn cartilage suffered when a cow hooked him in May.

The loss of Spur was the first in a series of deaths recently experienced by Buddy. Buddy’s sister, Ernestine, died in a car wreck in Georgia two days after Spur’s death. And then Buttercup, a Charlais-Herford-Angus cross that was the last in the herd Buddy shared with Junior, died about three weeks ago.

Junior and Buddy Mills are being featured in the Cow Creek Chronicles series appearing in Indian River Magazine. Buddy and Spur were photographed during an interview last January. The series follows Cow Creek Ranch, where Junior cowboyed and lived with his family from 1970 to 1977.

Buddy says 37 years is an unusually long time for a horse to live. In his experience, Buddy says most ranch horses live 25 to 28 years. Spur both knew how to take care of himself and at the same time received great care, he says.

“I don’t know words or adjectives to describe the horse but he was just one of a kind,’’ Buddy says. “There’s a lot of horses like that but I’ve never had one like him before and I’ve yet to have one since."

Listen to the podcast here 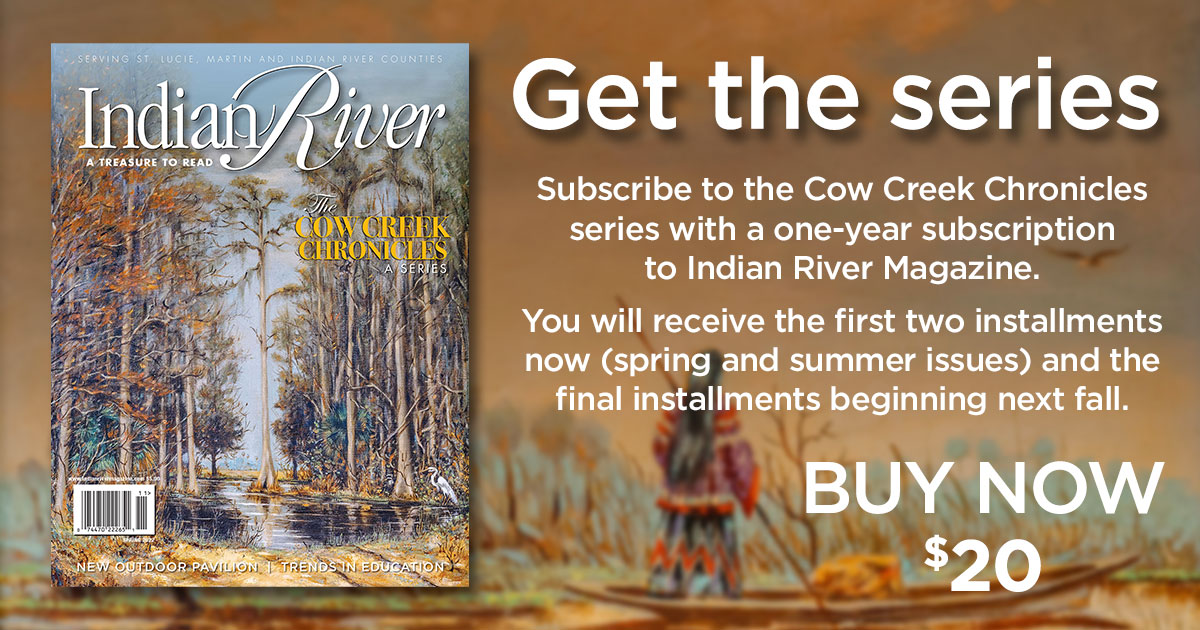 Read the series to date online:

Frank Raulerson creates Cow Creek Ranch and develops his granddaughter, Jo Ann, to take it over.

Jo Ann and her husband, Tommy, take over the ranch in 1954 when Frank Raulerson dies.
Writer and publisher Gregory Enns shares his link to Cow Creek Ranch.