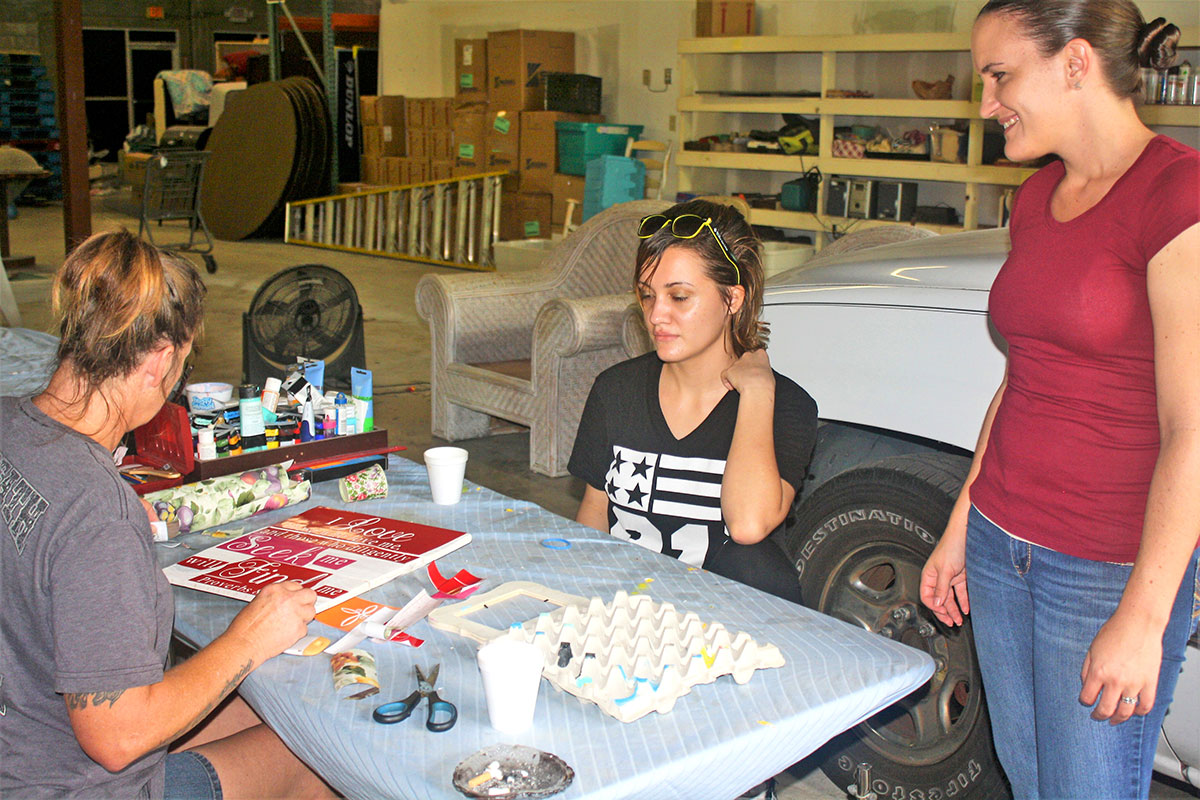 The phrase “Good Samaritan” is part of our vernacular, meaning a person who helps others. When the phrase was first coined in a first century parable, however, the words likely shocked listeners. Samaritans were regarded as outcasts at that time. “Good” Samaritan was a radical thought.

In today’s society, outcasts of another sort are transformed by the work of Good Samaritan Ministries in Port St. Lucie. In addition to offices, sanctuary, thrift store and work stations at 8280 Business Park Drive, Good Samaritan offers living quarters for 148 men, women and children in St. Lucie County.

In 2011, Vito Bitetto had a vision to establish a ministry to shelter women. During this time, he was ministering at the St. Lucie County Jail. The inmates got to know him and shared that when released, some had no place to go. “They asked him for help,” says staff worker Sara O’Leary. After much prayer, Bitetto (also known as Pastor Vito) opened his first recovery house, not for women as he had planned, but for the men he felt God had brought to him. He founded, and became pastor of, Good Samaritan Ministries.

The ministry has grown, as has the need. “We get homeless people the police don’t want to take to jail,” O’Leary says. “The court system and DCF (Department of Children and Families) refer people. We work with Mental Health Court. We also house some elderly folks with nowhere else to live.”

DCF draws up case plans which a parent or parents must follow in order to be reunified with their children. Since the ministry is an approved housing facility, this enables parents to stay with their children in some situations. Over the last several years, Good Samaritan has had nine of its families reunified.

Inmates released from jail must also follow a strict probationary policy. “Each former inmate that was released to us, who completed the program, has never violated probation,” says O’Leary.

COMMITMENT STRATEGY
Because people coming to Good Samaritan usually have multiple issues, policies have been instituted which the ministry’s leaders believe are in the residents’ best interests. For example, residents don’t work elsewhere during their first 30 days in the program. “Historically, they’d get high with that first paycheck. We have learned from experience and from other organizations what policies to implement for the safety and recovery of our residents,” O’Leary notes.

She says that although residents commit to a year, if they choose to leave prematurely, they can. “We want them to talk to us first, and not just react out of emotion, in the moment, however.” Usually, they stay.

Senior pastors and church members in the community who have toured Good Samaritan often say that they had no idea of the reach the ministry has. Bitetto says, “We take in the unloved, the uncared for, the people the Church and our community are not equipped to help.

“I explain to visitors that it isn’t that we don’t want their support. We need support. But I don’t want our relationships to be about money,” he explains. “A church might send a homeless person who walks in their door to a hotel for a week, and then what? That money would go further by bringing that individual to us.” Instead of a handout, Good Samaritan offers a “faith-based” living environment that stresses responsibility, accountability and productivity.

“When you say ‘homeless,’ people immediately get a certain picture,” says Bitetto, “but it might be a mother with kids who just lost her job and has no family here, and nowhere to go. There is no ‘homeless shelter’ in Port St. Lucie.”

“Homeless” might also mean someone like Bill, suffering from dementia. A faithful visitor to his mother’s nursing home, he kept showing up after his mother’s death. Although the former playwright was harmless, eventually the home called police. “It was seven months before we even knew he was on Social Security,” says O’Leary. “He had no ID, no possessions other than a box of his plays. We weren’t sure how much of what he told us was real and what was the dementia. Basically, we just loved on Bill, reestablished his identity and included him in our family.”

MORE NEEDS
Throughout the community, families are often overwhelmed by dealing with loved ones suffering from bipolar disorder, dementia or substance abuse. Many lack the financial resources to place them in a facility for care. Good Samaritan is a facility that now offers hope for them.

Good Samaritan began with men’s housing, expanding as the need grew for couples, women with children and the elderly. Residents are also grouped according to issues. “We try to group people together that can empathize with each other and grow together in their walks,” says O’Leary. “Everyone gets a personal plan to best serve individual needs.”

Much of what the staff juggles concerns meeting those needs. Doctor appointments, probation visits, DCF case plans and other requirements must be coordinated with transportation. The organization has 33 vehicles with trained drivers, many of whom graduated from the program themselves and returned to help. O’Leary says many of the residents that complete their program have their lives changed so dramatically that they want to “pay it forward” by staying on as staff.

Mighty Men Mechanics is one of the cottage industries Good Samaritan developed to not only maintain their fleet, but also for support and skill-building. The shop is managed by former program resident Patrick Pintal. After serving 30 months in prison, he returned to Good Samaritan, got married and started a family.

JOB OPPORTUNITY
“Our businesses are a major source of revenue funding our ministry,” says Bitetto. “In addition, they serve a vital role preparing residents to re-enter the community. Drugs are impacting younger and younger people. As such, many residents have no employment skills when they arrive. Our businesses give them the opportunity to build skills and work around the public.”

“What’s neat about our businesses,” says O’Leary, “is the atmosphere. These guys have mentors encouraging them and teaching them. At the end of the day, it’s not ‘Let’s go to a bar,’ but ‘Let’s go to church.’”

Good Samaritan’s other businesses are Heavenly Cuts Landscaping, Trinity Trees of PSL, FSH (Father/Son/Holy Ghost) Home Improvements, Kingdom Moving and Storage, Gifts from Above Pallet Décor and Maids from Heaven Cleaning Services. A staff member coordinates assignments, sends out invoices and makes sure payments are received, but residents do the work. Good Samaritan also has an eBay store and an on-site thrift store.

St. Lucie County Sheriff’s Department Chaplain David Thompson says that Good Samaritan is an oasis in the wilderness for many. “The hope and encouragement Good Samaritan gives is like oxygen for their souls,” says Thompson. “We’re blessed to have them. What they do for the downtrodden is both miraculous and transformational.”

To schedule a tour or inquire about business services, call 772-398-0065. For more information, visit www.goodsamaritanpsl.org.