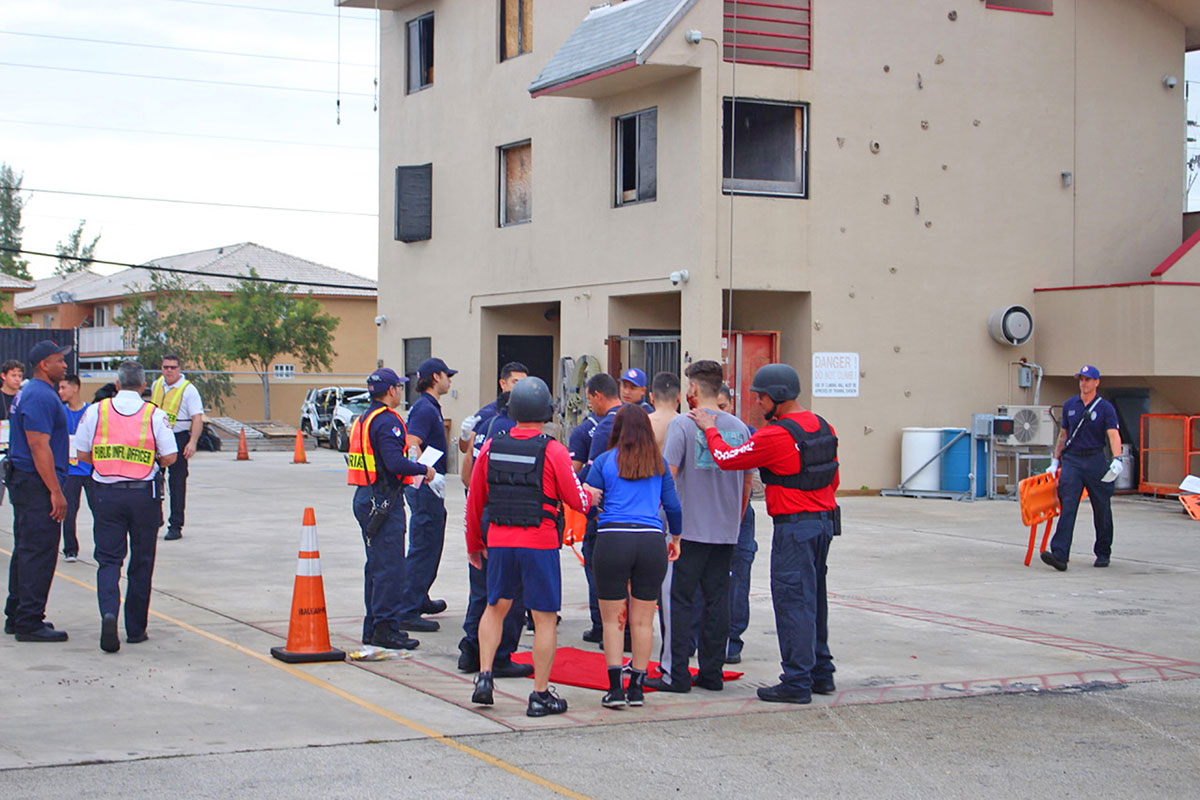 At vocational-technical academies, students are taught by experts what they could expect if they opted for a career as a firefighter, an electrician or other demanding jobs requiring special skills. Here, students at the City of Hialeah Educational Academy, a sister school to Somerset College Preparatory Academy in Port St. Lucie, are given instruction on what to do in a building fire. CITY OF HIALEAH EDUCATIONAL ACADEMY

Gobnait Zick has been waiting a long time for a school that could provide hands-on training in a trade for her son. The sixth-grader’s heart has been set on attending a vocational-technical school that would give him as many options as possible.

“My son wrote a paper to compare and contrast the differences between a traditional high school and a vocational-technical school when he was in fifth grade,” Zick says. “Since then he has wanted to go to a vocational school.”

Mom and son probably won’t have to wait much longer. The Port St. Lucie City Council hopes the school her son wants will be ready for students by 2020 or 2021.

The council has an economic study in hand showing that almost 1,900 skilled jobs will need to be filled in the next two years and that a majority of those employers are already having trouble finding workers.

They also have a citizens’ survey revealing that 80 percent of more than 4,000 respondents believe that a vocational career school is necessary in this city of 189,000 people. With that, the council jumped on the idea of creating a career academy in the city’s jobs corridor in Tradition, first discussing it at their summer retreat in late July.

After requesting proposals from charter school companies last summer, the city council chose Somerset College Preparatory Academy in October and is currently negotiating a contract with the school. Several companies looked at the proposal request, but Somerset was the only one that applied. At least one council member speculated that what the city wanted was more than the other companies thought they could provide.

The city council wants the career vocational-technical academy to go into the jobs corridor, Councilman John Carvelli says, because that’s where some of the companies that will need employees are or will be located. Career-oriented Kaiser University will also be nearby. A former member of the St. Lucie County School Board, Carvelli oversees the operations of Palm Beach County’s charter schools.

Councilwoman Jolien Caraballo says she believes the school should be in Tradition. “It’s projected that there will be 22,000 jobs there eventually.” One firm planning to move into Tradition Center for Commerce is Oculus, maker of ophthalmology products.

Boosting the city council’s interest, the 2017 Skills Gap Study from the county’s Economic Development Council (EDC) showed that 68 percent of respondents in the health care businesses were already reporting difficulty filling positions. In the trades, 94 percent were having trouble filling skilled jobs in construction, electrical, plumbing and carpentry. In manufacturing, 62 percent said they were having a hard time finding experienced and journeyman workers.

Some of those companies work in Tradition or soon will. City Electric Supply subsidiary TAMCO, for instance, is moving to the commerce center, and that move will create 50 jobs the company will have to fill.

ACADEMY NEEDED
Bob Ludlum, a plumbing contractor and a former vice-president of Treasure Coast Builders Association, told the council in October that a career academy is “extremely needed.” Some of the trades needed were not being offered in the county’s public schools, he added.

“This academy will be the gateway to fulfilling the needs illustrated in the 2017 Treasure Coast Skills Gap Study,” stated an invitation to residents, asking them to come to a November workshop to learn about Somerset’s plans.

The charter school company already operates two schools in the city, one focused on college prep for grades 6-12 in St. Lucie West and an elementary school for grades K-5 in southern Port St. Lucie, not far from Becker Road.

“We are, as a company, A-rated, Southern Association of Colleges and Schools accredited, we have over 20 years of experience, and we have the finances to do this,” says Erika Rains, principal of Somerset College Preparatory Academy in St. Lucie West. “Somerset has been here for eight years, and we know our community.” Rains lives in Tradition and has represented Somerset before the city council.

Richard Moreno, from the non-profit Building Hope, is serving as financial advisor to Somerset. He told the council in October that the school would need 25.225 acres for a building about 100,000 square feet and could cost Somerset $18 million. Carvelli says the hands-on labs could add another $2 million. The school will be constructed in phases, Moreno said, and Somerset would have the financing to do it.

The new school would focus on the trades that Gobnait Zick’s 11-year-old son has an interest in — trades such as welding, electrical and construction. He will have a chance to look over many different trades before settling on one.

The vo-tech school would also provide the core curriculum required by the state for a high school diploma. Graduates could enter the job market immediately or go on to college. The proposal calls for hands-on labs, on-the-job-training and an exploratory “wheel” where students could learn about various trades to help determine what they want to study.

APPROVAL NECESSARY
Somerset hopes to open Somerset Career Academy by the fall 2020 or 2021 date, but that will depend on whether the St. Lucie County School Board approves an application to operate a charter school there. If the application is denied, Somerset can appeal to the state, according to Carvelli.

It would be tuition-free, funded by the state and accept all St. Lucie County students, with a preference expressed by the city council for seating Port St. Lucie students first.
Besides graduating with a high school diploma, students could become certified in a number of trades, such as electricity, carpentry, plumbing and machinery maintenance.
Somerset Academy Inc., founded in 1997, serves nearly 34,000 students in Florida, Nevada, Texas and the Canary Islands.

A sister school, the City of Hialeah Educational Academy or COHEA, has a highly successful record in training for the trades, Rains says. It boasted a 96.7 percent graduation rate in 2017. Because of its success, she featured the Hialeah school in her presentation at the community workshop.

“COHEA is a unique academy model charter school that prepares students for the workforce through its career pathways program,” says its principal, Carlos O. Alvarez.

Students are taught by industry leaders in their respective courses. For example, certified firefighters oversee and provide instruction in the firefighting academy. Students have the ability to graduate with industry certifications in emergency medical responder and emergency medical technician through its partnership with Barry University.

“Our mission is to give our students the tools needed to go into these careers and give back to their community or neighboring communities,” Alvarez says.

IRSC PLANS
Unbeknownst to at least some of the city council members, Indian River State College has also had plans to boost education for students interested in trades and manufacturing. Since 2013 the college has been planning to replace its 51-year-old trade and manufacturing center with a new two-story, 55,000-square-foot skilled job training center called the Treasure Coast Advanced Manufacturing Center. It would be built across the street from the Fort Pierce campus as soon as it can get enough funding from the state.

College President Ed Massey is looking for $14.8 million from the state Public Education Outlay Fund this year. In past years PECO awarded the college $1.5 million for planning and $5 million for the project, and the college’s foundation has given $2 million. The building will cost $23.3 million. The state legislature decides how much money PECO will get to distribute each year.

Massey says he knew that training would be needed for skilled jobs in robotics and technology. And equipment that is being manufactured today will use technology — for example, self-driving cars. Air conditioning units today have far more technology to control energy usage and humidity. “We knew we had to upgrade our programs,” he says.

IRSC already has specialized training in several of its buildings. The Brown building has training for nuclear power plant workers and for “green,” or environmentally responsible, building construction.

The new building would expand the college’s current welding program. The port of Fort Pierce, now in the mega-yacht refurbishing and renovation business, will need specialized welders to work on the yachts, Massey says.

Smart manufacturing would be taught – Massey gives the example of a lathe being programmed to form a final product. Students would also learn to use 3-D printers, which are capable of printing out three-dimensional products, such as parts of a prosthetic arm. “You work off a schematic to make a product,” he says.

The building will include four labs for welding, automotive, diesel/marine, and heating and air conditioning systems, a central “maker’s mall” where students can show off their projects, a computer technology lab and a cyber security advanced technology lab.

The college was recently awarded a $1.53 million grant to create an aviation and marine training program to help meet growing needs for a skilled workforce. The two industries currently have more than 300 job openings, says college spokeswoman Suzanne Seldes.

The college currently hosts a lot of trade-specific education programs, including masonry, carpentry, plumbing, electronic engineering technology and drafting and design technology. Gobnait Zick says the future looks bright for her son. After graduating from Somerset, he would be able to choose a job right away or might decide to attend IRSC and train in the new manufacturing building, or in a skilled jobs program in one of the other new buildings IRSC has built in the last 10 years or so.