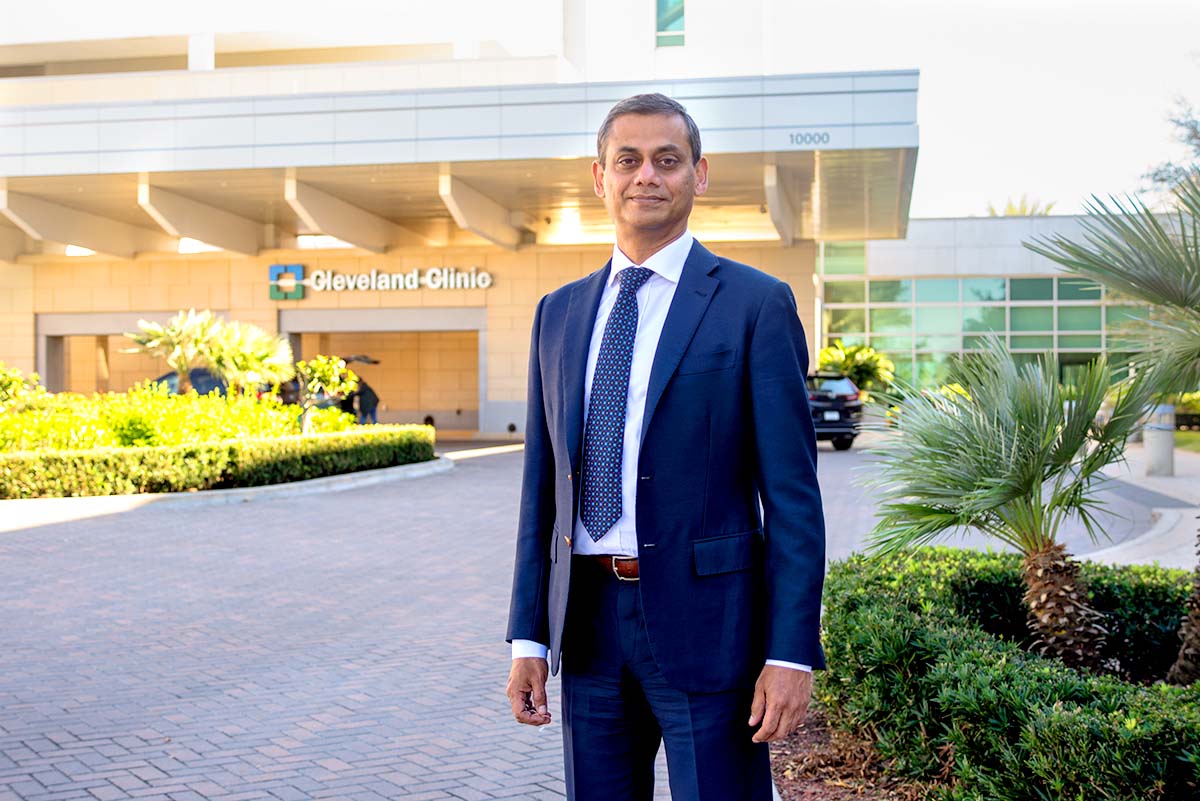 Dr. Madhu Sasidhar, who is a practicing pulmonologist with an extensive background with COVID-19, was named president of Cleveland Clinic Tradition Hospital
in September. ANTHONY INSWASTY

Growing up in southern India, Madhu Sasidhar never dreamed of being a doctor.

"I enjoyed tinkering with stuff," the president of Cleveland Clinic Tradition Hospital says. "Tearing things apart and rebuilding them."

Planning a career in computer science, he enrolled in engineering school but eventually reconsidered. The next year, he began medical school, discovering more than one reason to be grateful he did: He and his future bride shared the same classes.

"Her handwriting was so perfect I used her notes frequently," he says. "That's how it happened. But she might see it differently."

They were married in a centuries-old Hindu temple in the tropical city of Trivandrum - quite a change from the tiny studio apartment they soon found in Manhattan. The compelling reason for leaving India was Sasidhar's interest in critical care and his attraction to the devices used.

"At that time, the specialty hadn't evolved in India," he explains. "There were not many opportunities."

Sasidhar's fascination with critical care led him to pursue pulmonology, specializing in respiratory care. During his residency in New Haven, Connecticut, Sasidhar worked with many veterans through the Department of Veterans Affairs, diagnosing and treating lung cancer, chronic obstructive pulmonary disease and other conditions.

Later, while on the staff of Cleveland Clinic's main campus in Ohio, it was not uncommon to care for VIPs - heads of state, royalty, celebrities and corporate heads.

As stated in an article co-authored by Sasidhar, "Caring for VIP patients requires innovative solutions so that their VIP status does not adversely affect the care they receive."

That approach is important to all Cleveland Clinic patients. When Sasidhar was appointed president of the Tradition hospital in September, his immediate priority could have been likened to a big bucket.

"We are always laser-focused on the quality of care," Sasidhar says. "And then we want patients to have the best experiences they can. But especially in St. Lucie County, with its growing population, there is a high demand for services. This is the 'bucket of access' - making sure patients see the right provider at the right time at the right place."

Before coming to Tradition, Sasidhar was chief medical officer at Cleveland Clinic Abu Dhabi in the United Arab Emirates. He also chaired its COVID-19 Task Force.

"It was the first [Cleveland Clinic] hospital to care for patients with COVID," he says.

The first diagnosis was in February 2020.

"We quickly saw large numbers," Sasidhar says. "There was no playbook. No scientific literature."

Having worked with H1N1 [swine flu] patients was helpful; the hospital also gleaned data from northern Italy at that time.

Abu Dhabi presented several peculiarities. As an island, it relies heavily on imports. Pandemic-generated supply chain interruptions created immediate problems. Another issue dealt with the human side. About 80% of Abu Dhabi's population are expatriates.

"Frequently, I had to call a family member in another country to tell them a brother had died in our ICU," Sasidhar says. "There were language barriers, distance. There was no way to console them. It was one of the hardest things."

Now in Tradition, Sasidhar's plans for the hospital have been challenged by the immediacy of the milder - but more transmissible - omicron variant of COVID-19.

"We're still seeing a fair amount of cases. Those with severe illness are unvaccinated, but it has affected us as caregivers, too."

Although Sasidhar's predecessor, Robert Lord, is an attorney, Cleveland Clinic's model has been a physician-led organization throughout its 100-plus-years of history.

"Physicians have the ability to know the issues and processes at an intimate level," Sasidhar says. "The vast majority of Cleveland Clinic leaders are also practicing caregivers."

Sasidhar adds that while it is too early to tell if the pandemic will adversely affect the number of people entering the medical field, the last two years "have certainly highlighted the need. Nurses are a priority, but also respiratory therapists and imaging technicians."

Something else that is clear - and unanticipated - is the significant number of health care providers leaving the field. Whether they're taking a break or retiring early, Sasidhar says it's been hard on the industry.

"It's a big loss because they are the ones with the most experience."

From engineering school dropout to hospital CEO, Sasidhar's journey from India to Florida - by way of New York, Connecticut, New Mexico, Ohio, France and Abu Dhabi - has not been typical. But he is still a doctor at heart. When things "settle down a bit," he plans to resume his practice, treating patients in addition to heading operations.

"It's a great privilege to circle back to that passion."

To circle back, perhaps, to the boy who loved to look inside things, to figure out how they were made and how they worked - a curiosity that continues to serve him well.

Hobbies: "I'm an avid gardener - it will be interesting to go from four seasons to two - and I read extensively on a wide range of topics."

Who inspires me: "I spent four years in a Jesuit boarding school and was inspired by those whose lives were inspired by mission. Since then, I've seen that type of leadership in health care and outside - mission-driven people who put in every effort."

Something most people don't know about me: "I'm a self-taught computer programmer with expertise in big data platforms. I developed a technology that was patented through Cleveland Clinic Innovations and subsequently commercialized."