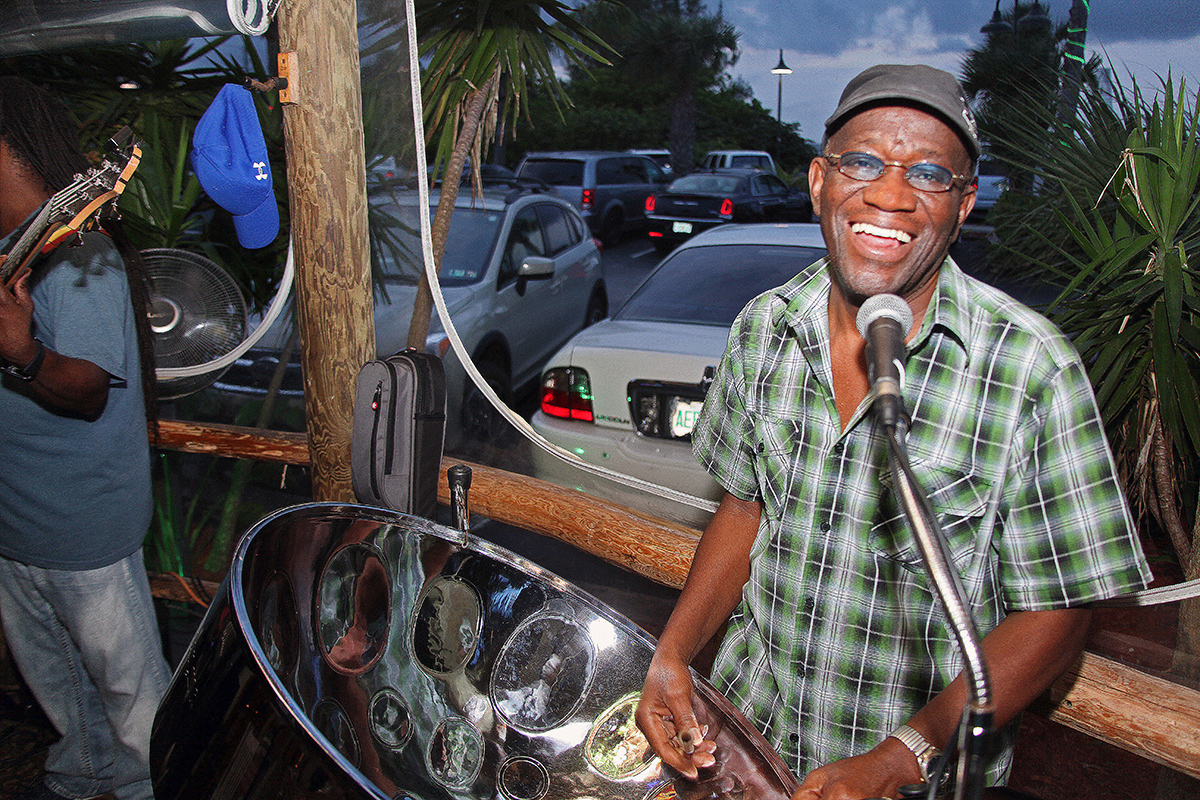 “People don’t know it, but we love country music in Jamaica, and Johnny Cash is one of my favorites,” says Graham, who has played the steel drum and crooned songs for 28 years at Conchy Joe’s in Jensen Beach. “He used to walk around my hometown of Falmouth. He sponsored an orphanage in Rose Hall. I never met him, but I did see him. I knew his music.”

When Graham was in high school, the government funded all of the after-school centers in Jamaica with multiple steel drums so students could take up the instrument. “I started playing when I was 17 and I fell in love with it,” says the Port St. Lucie resident. He is entirely self-taught and cannot read sheet music. He knows the keys and the music scale but plays completely by ear — as do many steel drum musicians.

Thousands of steel drummers play reggae music around the country, but very few are also singers. A much smaller number can take difficult songs from many different music styles and deliver them in unique reggae renditions.

“These are songs that I have always loved,” Graham says of the dozen or so numbers he covers in his reggae versions. He also plays Caribbean favorites such as the classic, “Shame and Scandal in the Family.”

Graham plays three different songs from Disney movies. “I try and make everybody happy, even the kids,” he says. “If someone requests something like ‘Sweet Caroline,’ I go home, research it and practice it.”

He plays solo on Mondays, and Thursday through Sunday with his two bandmates — as Rainfall — who also play by ear and easily pick up new songs, he says.

Graham says he generates about three new songs a month. “This is what I like about what I do,” he says. “The main ingredient is reggae, but we mix it up with a little bit of everything else.”

The cover tunes “are mostly songs I like,” he says. “If people love them, I will keep on doing them.”

Some of his favorites are Eric Clapton’s “Wonderful Tonight” and “Can’t Help Falling in Love,” popularized by Elvis Presley. Others include an instrumental version of Frank Sinatra’s signature “My Way,” Pink Floyd’s “Another Brick in the Wall,” “Everything I Own” by Bread, “Day After Day” by Badfinger, Bill Withers’ “Lean on Me,” and “Cool Change” by the Little River Band.

The remakes are from the styles of blues, rock, reggae, country and rhythm and blues. “(Bluesman) Stevie Ray Vaughn is coming next,” Graham says.

One night four guys walked in and told Graham he was supposed to be playing reggae. They said they would give him $5 if he could play a Rolling Stones song. Minutes later, Graham launched into the haunting opening of the Stones’ “Ruby Tuesday.” The four guys stared at each other in disbelief, Graham says.

Since he began playing solo on Mondays, Graham says one snowbird couple has been there every night during the winter season. Another man frequently asks to play a particular song and drops a $100 bill in the tip jar. That song always gets played, Graham says.

Two of Graham’s personal favorites are “Free Fallin’” by the late Tom Petty and “Imagine” by John Lennon. “Who doesn’t love the Beatles?” says Graham. Rainfall’s version of “Nights in White Satin” by the Moody Blues is mesmerizing, and so is the eerie rendition of “Hotel California” by the Eagles.

Originating from 55-gallon drums in Trinidad and Tobago, steel drums are common around the Caribbean. Graham’s $5,000 tenor drum was manufactured by Panyard from a sheet of steel in Akron, Ohio. Technicians come by twice a year to tune the instrument.

When he first began playing at Conchy Joe’s, Graham was living in Fort Lauderdale and commuting. “It was the best move I ever made,” he says of his relocation. “I’m not a big city guy. It’s the little place in Jensen Beach, the little fishing village. I love entertaining and when they like what you are doing that’s all I need. I have been here for 30 years and I’m going to be there (Conchy Joe’s) forever.”

Age: 67
Lives in: Port St. Lucie
Occupation: Steel drummer, singer, composer and arranger
Family: Sons, Brian, Christopher, Mark and Adrian; five grandchildren
Education: Falmouth Primary School, Falmouth, Jamaica
Hobbies: Watching TV news and sports, football, basketball and soccer
Who inspires me: “Bob Marley because of his songs and their meaning. If you listen to his songs today, to the word it is like what he said then is happening now. One love, one heart, one destiny.”
Something most people don’t know about me: “I have been a lifeguard and a cabinetmaker.”