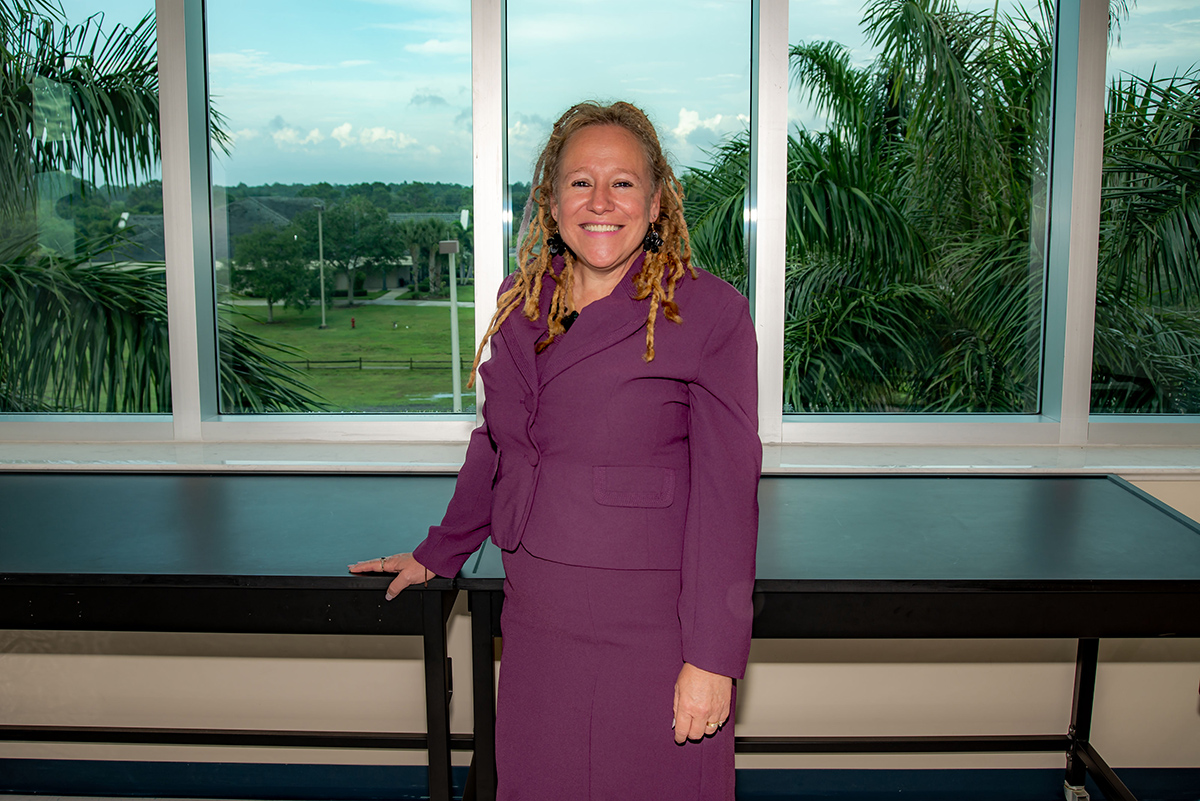 Kristy Wheeler Conway marvels at how much her life has changed since the first scholarship she received at Indian River State College. Once a foster child, she seeks to better the lives of children on the Treasure Coast, working evenings at the GED program on the Pruitt Campus of IRSC where she helps students complete the program and apply for scholarships.

Her first childhood memories are of life in a foster home. She and her siblings moved from foster care back to their home only to be returned to foster care again, with the cycle repeating as her family moved back and forth between the Jacksonville area and towns in south Georgia. She remembers the plastic bag that held her clothes and the few belongings she had. “You never wanted to lose sight of that bag,” she says. “It was all you had.”

To meet Kristy Wheeler Conway, one would never imagine that her childhood had been so stressful. Her warm smile and ready laughter belie her life’s beginnings.

Dropping out of high school at age 15 to marry her 18-year-old boyfriend and escape the foster care cycle, she was the mother of two by the time she turned 18. Then, difficult circumstances and divorce left her a single mom with two young children. A fortuitous meeting with Robert Conway led the young family to move to Port St. Lucie, which opened all sorts of avenues for Kristy. Her husband had his own successful stucco business and Kristy found a job at Travis Pest Control, working there for many years. Once her children were grown, Kristy wanted to get that high school diploma she lacked.

Heading to Indian River Community College, as it was known then, she found a welcoming GED program and quickly earned her diploma. Prior to graduation, she met with college professor Keara Sodano, who helped her apply for the many scholarships awarded to GED students.

“I always thought college was for the wealthy people’s children,” Kristy says. “I never knew anybody who went to college.”

At her GED graduation ceremony in 2009, Kristy was awarded a Laura Foster Scholarship and thought it “would be cool to take a class or two,” eventually earning an associate’s degree in liberal arts at Indian River State College in 2012, all while working full-time. Kristy says it was about that time someone talked to her about the challenge of trying to help a classroom full of children as opposed to getting a human services degree and working only with those children who needed special help in their lives. In 2015, she graduated with high honors, receiving her bachelor’s degree in human services, specializing in youth and family.

Now she was on her way to helping children. “I worked as an intern at SafeSpace,” Kristy says, adding that she also worked with the student assistance program at New Horizons.

“When I was done at IRSC, I missed being there,” she says. “It was such a big part of my life for so many years. I applied for a job as an instructor in the GED program and now work as a facilitator two nights a week at the Pruitt Campus, guiding students to the completion of the GED and helping them apply for scholarships.”

Along the way, Kristy was on the All-Academic Team at the college and also became a guest speaker for the IRSC Foundation, Inc., where she spoke to donors and let them know how much their contributions help students like her.

“Dr. (Edwin) Massey used to tell me I was an ambassador for what education can do — how it can change lives,” Kristy says.
Before her graduation, Kristy had been advised to attend a Kid’s at Hope seminar at the college. “That is when I met some people and discovered a job opening with the Children’s Services Council of St. Lucie County,” she says. “I was hired in part due to my Kids at Hope experience, and then, through the connections and relationships I developed at CSC, I was named the Drug Free St. Lucie coalition coordinator. I worked on presentations of efforts on stopping substance misuse.”

As she completed the Community Anti-Drug Coalitions of America (CADCA) training for its National Coalition Academy, she worked through the products the group needed to establish itself as a highly-effective anti-drug coalition: a community assessment, a strategic and action plan, a logic model and a sustainability plan. She sits on the 19th Judicial Circuit Opioid Task Force, and in turning it all full circle, she was recently accepted to sit on the board of directors for Communities Connected for Kids, previously known as Devereux Community-based Care, which operates the Florida Department of Children and Families foster care system.

In the years since her graduation in 2015, Kristy has been unable to give up working with SafeSpace, a domestic violence shelter. She fills in there as needed taking hotline calls where she determines the lethality of the caller’s situation and clearing the family for shelter, if deemed necessary. The warm and loving reception she provides for the distraught mothers and their children is often rewarded with a beautiful picture colored on a piece of notebook paper. “My heart is in this job,” she says.

“I also counsel the women on independence and self-esteem,” Kristy says, adding that is very important for the women at the domestic-violence shelter.

As far as academics are concerned, Kristy is not ready to give up on spending what little spare time she has on homework assignments. She is now working online with Amberton University in Texas, pursuing a master’s degree in family studies.

Age: 49
Lives in: Port St. Lucie
Occupation: Advocate/assistant at SafeSpace Inc., GED facilitator at Indian River State College
Family: Two children and four grandchildren, all of whom live in Georgia
Education: Associate’s degree in liberal arts, bachelor’s degree in human services — specializing in youth and families, Indian River State College; pursuing master’s degree in family studies, Amberton University
Hobbies: Spending time at the pool and beach
Who inspires me: “I am inspired by children who have experienced trauma yet are resilient.”
Something most people don’t know about me: “I have a motorcycle license and I drove a Harley Davidson for years.”